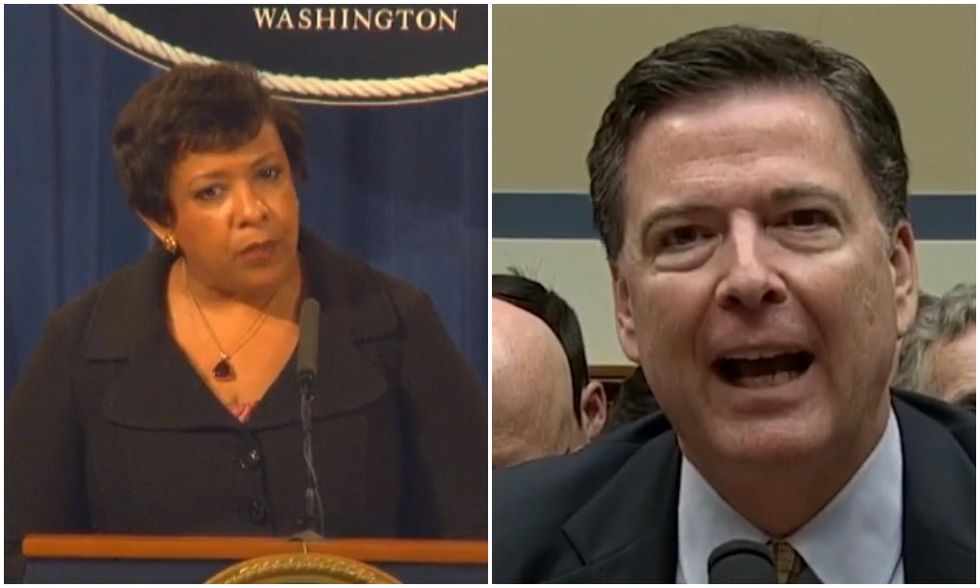 They have both been VERY bad.

There was a story in Thursday's Washington Post that will make you GRRRRR! We already know that FBI Director James Comey is a Trump-supporting Republican who we're pretty suresent his little love note to Congress about alleged "new" Hillary emails eleven days before the election with the specific purpose of pissing all over our democratic process and handing the White House to The Great Gold-Plated Puss-Grabber. But did you know Attorney General Loretta Lynch actually, AS HIS BOSS, could have ordered him not to send that letter, and that she didn't take that opportunity? And did you also know that Comey's biggest reason for doing it, and Lynch's biggest reason for not issuing that order, are one and the same? Namely, they were worried that Republicans would be SO MEAN TO THEM OMG UNFAIR if they chose different courses of action.

GRRRRRRRRRRR! WTF IS WRONG WITH THE OBAMA ADMINISTRATION THAT THEY TURN INTO SUCH PUSSIES ABOUT STUFF LIKE THIS?

This is all according to a painstakingly detailed account from Sari Horwitz, and we sure don't like to spend our Fridays angry and in need of blood pressure medication, but RAAAAAAAAAAAAAAAAAAAAAAAGE!

“If she thought [the letter] violated department policy or was otherwise a bad idea, she could have ordered him not to send the letter,” said Goldsmith, who noted that soon after the letter was released, Justice officials proceeded to criticize Comey when Lynch had the power all along to stop him. “It was an astonishing failure of leadership and eschewal of responsibility, especially if Lynch really thought what Comey did was wrong.”

But why did she not do that? Because of that stupid "meeting" she had on the tarmac in Phoenix, where Bill Clinton waltzed on to her aero-plane to shoot the shit with her for a half hour, where they say they talked about their grandkids and TruckNutz or whatever, and not about the Hillary emails case. (Again, we must assert that they probably are telling the truth, because if they wanted to do a secret backroom deal, they could have called each other on the phone or done it in the nonexistent basement of Comet Ping Pong.)

So she was in a weird place, and Republicans were being mean to her and questioning her impartiality, so she did not tell her peon James Comey what to do. This, by the way, is what it was like at the Justice Department, when they got word that Comey was about to type a letter to Congress and throw the election:

The official in Deputy Attorney General Sally Q. Yates’s office who received the FBI call immediately understood the explosive potential of Comey’s message, coming so close to the presidential election. Federal attorneys scrambled into offices on the fourth and fifth floors of Justice Department headquarters, where they huddled to figure out how to stop what they viewed as a ticking time bomb.

“It was DEFCON 1,” said an official familiar with the deliberations. “We were in­cred­ibly concerned this could have an impact on the election.”

So they made many recommendations and gave Comey all kinds of advice about "don't do it," but he did it anyway.

And why? Well! Republicans were so mad at Comey this summer at the conclusion of the Hillary emails investigation, when he refused to give Hillary the death penalty for crimes she did not commit, even though Comey made it pretty clear in his press conference announcing No Criminal Charges that he doesn't like Hillary very much. If he didn't say "EMAILS!" at them eleven days before the election, why, they might make fun of him and accuse him of being gay for Hillary and pull his pants down after gym class! Also too, he was worried about the existence of "new" Hillary emails leaking out of the FBI, maybe from that rogue Hillary-hatin' sleeper cell in the agency that gets its news from the Breitbart comments section and calls Rudy Giuliani "Daddy."

So with Lynch sort of leaving Comey in the lurch -- she didn't recuse herself, but she didn't put her foot up his ass either -- Comey decided to take matters into his own hands, because he didn't want to get made fun of by the mean Republicans, and also because he PROMISED Congress that he'd tell them if he was doing any more investigating. Sort of:

“My first question is this, would you reopen the Clinton investigation if you discovered new information that was both relevant and substantial?” Rep. Lamar Smith (R-Tex.) asked Comey during the hearing.

“It’s hard for me to answer in the abstract,” Comey replied. “We would certainly look at any new and substantial information.”

Did you see the promise? No, we didn't either.

Like we said, the entire article is GRRRR and will make you rage and get your blood pressure up, so you should definitely read it, but only if your doctor says it's OK. Otherwise, just stay at Wonkette, where the dick jokes are.