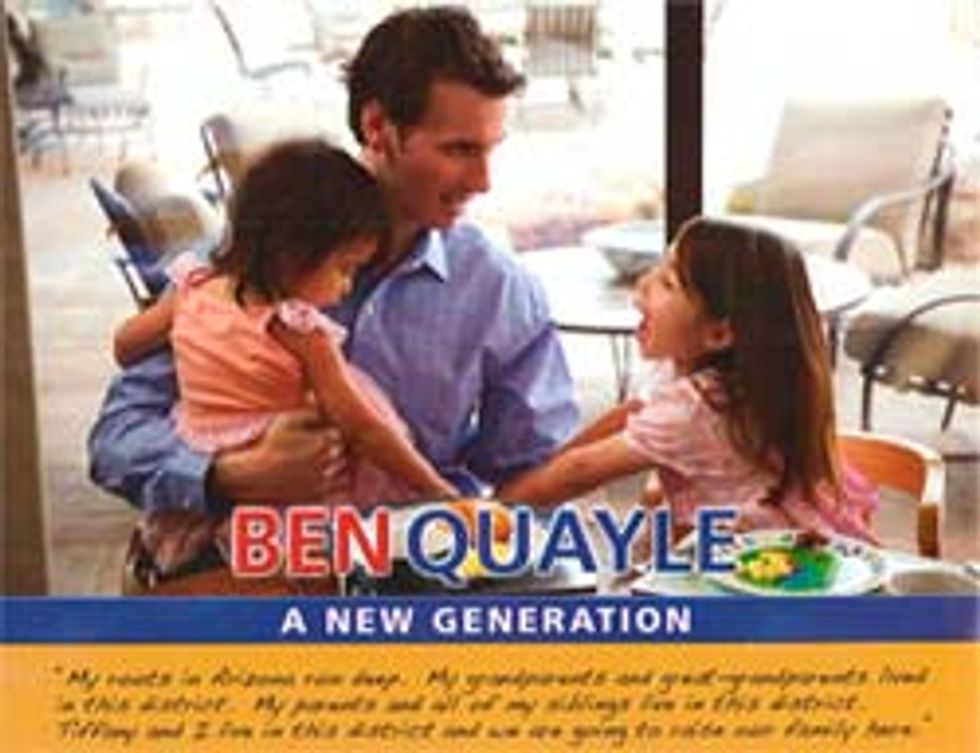 Did you know thatI Love The Late '80s And Early '90s star Dan Quayle has at least one son, Ben? He does! Did you know that Ben himself is the father to two adorable daughters? Well, he isn't, but if you lived in Arizona's third congressional district, where he's running for the Republican nomination for Congress, you might think so, because you would have received this ad in the mail, showing him partying down with two little girls. And yet he and his wife did not create these children with their naughty bits. Is this the worst political scandal in U.S. history? All signs point to yes.

The Arizona Capitol Times blows the lid off of this awful conspiracy:

Quayle is depicted in playful scenes with two toddler-aged girls. Underneath one image, the text reads, in part: "Tiffany and I live in this district and we are going to raise our family here."

(Your Wonkette editor would probably initially parse this as meaning that one of these girls was named Tiffany, which, gross, but never mind that for the moment.)

It's not a stretch to make the assumption that the cute tots -- one sitting on his lap; the other sitting next to him -- are his daughters. But that's not the case. The recently married Quayle doesn't have kids. It's not until you flip the mailer over to read that Quayle and his wife live in Phoenix with their dog, Louie. No mention of kids.

The second mailer, a pro-life piece that explains his staunch opposition to abortion and support of traditional marriage, contains the same image of the girls. But this time, there's no disclaimer about Quayle not yet having kids of his own.

Right, because smart pro-life voters could "read between the lines" of any such disclaimer and realize that there's only one reason a nice 33-year-old married man like Quayle wouldn't have kids: abortions, and lots of them. It turns out that the little girls are "relatives of a staff member and happened to be at a campaign event" (i.e., illegal child labor, probably from Mexico). Congratulations, Arizona Capitol Times, for nailing Ben Quayle for being the first-ever politician to use images of children not-his-own to bring warm feelings to the hearts of voters. [Arizona Capitol Times]