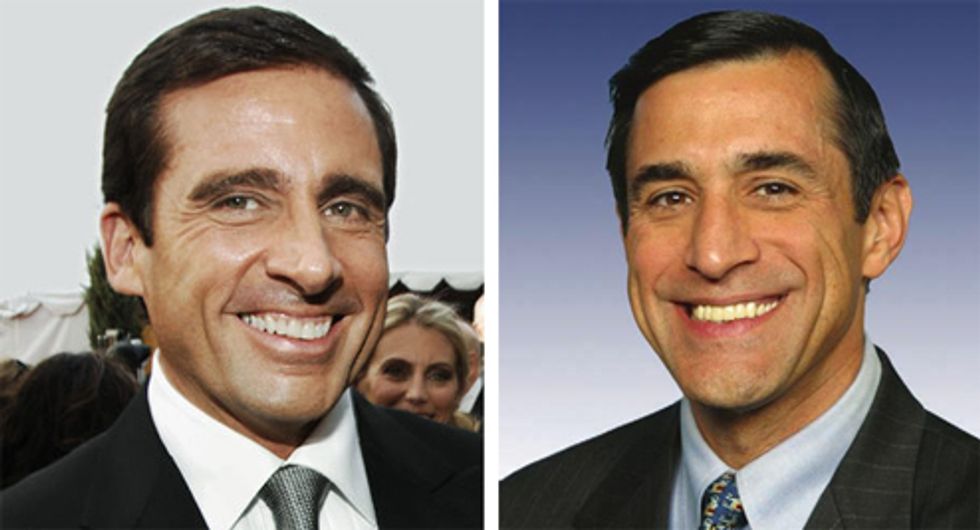 Continuing his hallowed tradition of fixing things that ain't broke and shaking his fist impotently at Obamacare, Big Government, and a cloud, Darrell Issa is introducing a bill that would require the the HHS to inform people if their seeekrit healthcare data is stoled in a security breach of the ACA website. Damn straight we need such a thing! You know private companies never have a problem with enormous data leaks, but the ACA is probably selling your data to a trenchcoat-wearing dude in the back alley right now.

Darrell Issa is ON IT, people. He has your best interests in mind, and he's going to make sure you get protected by demanding the HHS do what it is already doing.

The GOP bill set for a Friday vote would require the Health and Human Services secretary to tell people if their private data was compromised in a security breach, but, as laid out in a Democratic committee memo issued Thursday, HHS is already required to do that, and there haven't been any successful breaches thus far anyway.

Well thank god for that! We are glad that Darrell Issa is making sure that sensitive data related to the health care website is locked down.

HealthCare.gov could clearly be compromised if, say, sensitive documents were leaked to the public that included software code or other technical information that provided hackers with a road map for vulnerabilities in the site. Such documents currently reside with Issa, who obtained them last month -- unredacted -- after subpoenaing them from MITRE Corporation, the federal contractor overseeing security of the website.

Did people want to give this data to Darrell Issa? No they did not. They begged, they pleaded, they told him he could come down to the contractor's offices and look at any damn thing he pleased, but Darrell Issa said "this will never do! I've got America to protect, and the only way I can do that is by having secret technical information about a website with a staggering amount of private data on it."

Everything's probably OK, though, right? We mean, it isn't like he'd disclose anything he had in those unredacted cyber security documents.

[O]n Dec. 17, he posted [unredacted] excerpts from them online in a letter to HHS Secretary Kathleen Sebelius in which he raised concerns with the website's security.

Well, we DO know that the very best way to ensure that American interests and data are secure is by posting the data for anyone to see. Just ask Julian Assange or Edward Snowden. And it isn't like this is the first time that Issa has let classified information stretch its legs, run, and be free.

[H]e's got quite a track record of leaking sensitive information. In Oct. 2012, he compromised the identity of Libyans working with the U.S. by posting 166 pages of sensitive State Department cables online. He leaked a document in May 2011 that was covered by a court-ordered seal, he released sensitive information in July 2011 about security breaches at U.S. airports and in June 2012, he revealed information from court-sealed wiretaps while speaking on the House floor.

Someday, people will make straight-to-video movies about Darrell Issa and his heroic free speechiness. Julian Assange got Benedict Cumberbatch to star in his biopic. Darrell Issa will probably be stuck with Steve Carell, but it will be a really epic, heroic Steve Carell.