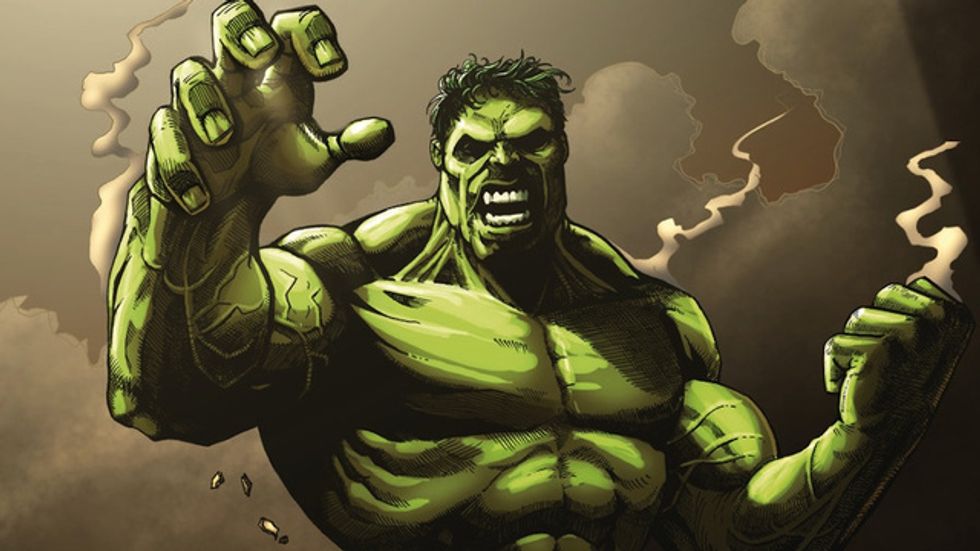 After months of no information at all, and a grand jury process where the prosecuting attorney put on the best possible defense of Ferguson Police Officer Darren Wilson, we finally got a document dump of all the testimony presented to the grand jury and had a chance to see, for the first time, Darren Wilson's own testimony of what happened. And what happened was that he was attacked by a mutant supervillian.

According to a transcript hosted by St. Louis Public Radio, Wilson testified that Mike Brown was some kind of superhuman monster. In Wilson's telling, after Brown hit him the first time through the open window of his police SUV, he tried to grab Brown's arm, and he realized he was dealing with no mere "unarmed teenager":

And when I grabbed him, the only way I can describe it is I felt like a five-year-old holding onto Hulk Hogan ... That's just how big he felt and how small I felt just from grasping his arm.

It's just like Ben Stein said! Mike Brown was a giant mass of human weapon, who was also black. (And yes, he was a big guy: Brown was 6-foot 4 and weighed 294 pounds, while Wilson is (updated -- he is still present tense, unlike the kid he shot) the exact same height, but only 210 pounds.)

In fact, Brown didn't merely punch Wilson; he hit Wilson so hard that Wilson was pretty sure one more punch might kill him. Wilson explained that's why he pulled his gun. He didn't have a Taser and decided against Mace because it was on the wrong side of his belt, and in the close confines of the vehicle, it would have blinded him (Wilson wore contact lenses).

And here's where we get Supervillian Move #1: Brown merely laughed at the puny human and his earth weapon. Wilson drew his gun and said "get back or I'm going to shoot you," but Brown simply reached into the vehicle and grabbed a gun that was being pointed at him, saying, "You are too much of a pussy to shoot me." Frankly, we're surprised that Brown didn't also bend the gun barrel into a pretzel.

The transcript isn't especially helpful in explaining the choreography of the struggle, as Wilson refers to a photo of his gun:

If that's pointed at me, I'm holding that like this. So it is pointed at, I would be Brown, he grabbed with his hand over the top like this manner and then twisted it down like this. And when it twisted, it ended up being like this in my hip.

You get the picture now. Wilson said Brown forced the weapon down and against Wilson's hip, and was trying to get his fingers inside the trigger guard; Wilson pulled the trigger a couple of times with no results and then the gun went off, and it shot the door panel of the truck, sending glass from the rolled-down window everywhere. And that just pissed Brown off, with attendant monster gestures. Brown stepped back from the car, and then showed Wilson his Rage Face:

[He] looked up at me and had the most intense aggressive face. The only way I can describe it, it looks like a demon, that's how angry he looked. He comes back towards me again...

And so Wilson fired another shot, and Brown ran.

Finally, the moment that's so bizarre that we know that Darren Wilson isn't merely in a fight with a big strong black teen; he actually is going up against an X-Man with supernatural abilities. After Wilson chased Brown with a "cloud of dust behind him" -- which frankly is more Looney Tunes than Marvel Comics -- Brown turned and began moving toward Wilson again, maybe reaching under his shirt for his waistband (gotta throw that in for good measure). Wilson fired his gun at Brown, hitting him at least once, but the bullets just made Brown angrier. And here's where we get first-hand testimony of Mike Brown's superhuman abilities. Somehow, copying the text isn't quite sufficient; you need a screenshot of the transcript to appreciate it:

Yep. Mike Brown "bulked up" to run right through the bullets, and then Wilson had no choice but to shoot him -- a dozen times -- until he was dead. We're assuming that this amazing factual information is part of the "scientific evidence" that persuaded the grand jury not to indict. Also, too, that was the most exciting video game Boss Battle ever played out in grand jury testimony, ever.

By now, you've probably already seen the photos of Darren Wilson's unspeakable injuries; he looks pretty good for having been nearly punched to death:

Remember how Stupidest Man on the Internet Jim Hoft got all kinds of press for "revealing" that Wilson had supposedly suffered a massive fracture of his eye socket? (Two sources told him!) Hoft was still linking to his own story of that massive injury as recently as this weekend. Here's Darren Wilson's face:

Even the New York Times couldn't resist a rather disbelieving tone (dare we say snark? We dasn't!) in describing the photo:

This close-up snapshot is the clearest image showing Officer Wilson’s most severe injury – a minor abrasion on the side of his face.

As one astute smartass put it on Twitter, "If this is the new threshold for what "savagely beaten" looks like, I hope it's applied to domestic abuse cases."

Even so, Yr Doktor Zoom is a rhetorician, not a medical doctor, so maybe under all that is a completely fractured eye socket, just like in this sample x-ray that Jim Hoft found (and from which he removed the text "UNIV OF IOWA," inviting people to think he'd gotten ahold of Wilson's actual x-rays):

Right now, Mr. Hoft is a little busy adding exclamation points to every headline about a rioter or looter he can find, but we expect he'll retract and apologize for his inaccurate "orbital blowout" story any day now -- just as soon as he pays Yr Wonkette the money he owes us.