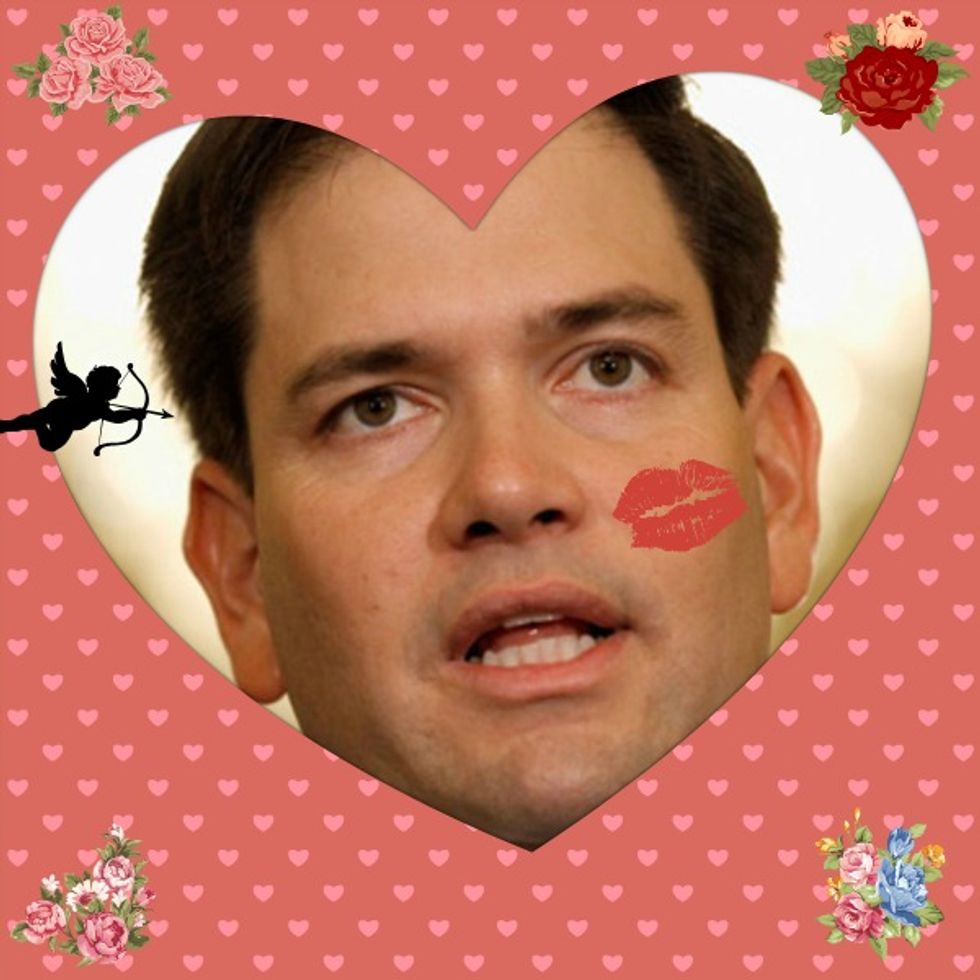 taken from the back cover of David Brooks's reporter's notebook

It seems like just last week we were writing about how David Brooks would like to gay marry Marco Rubio except not really in a gay way because ewww no homo. For some, their mancrush finishing third in Iowa would mean that it was time to fling their love at another candidate, but Rubio's bronze medal didn't seem to dampen David Brooks's ardor.

Truly, nothing can extinguish the inexplicable torch Brooks is carrying for Rubio. His love leads him to write one million words of what we're sure he thinks are trenchant cultural observations about Trump on his way to open-mouthed kissing Marco, and if we have to read it, you have to hear about it.

Brooks kicks things off by showing us that he made some intern do a fuckton of opposition research for him about Trump, and the intern really didn't have any parameters except "I hate Donald Trump because he is not my boyfriend Marco Rubio" so they kinda winged it and dredged up the fact that Trump loves him some pro wrestling and even shaved the head of Vince McMahon, the WWE's CEO, right there on television for all to see.

This is simply NOT how a presidential candidate should conduct oneself, sniffs Brooks haughtily.

Trump brought this style onstage at the first Republican debate, and a thousand taboos were smashed all at once. He insulted people’s looks. He stereotyped vast groups of people — Mexicans and Muslims. He called members of the establishment morons, idiots and losers.

Trump was unabashedly masculine, the lingua franca of pro wrestling. Every time he was challenged, he was compelled by his code to double down the confrontation and fire back.

We're sorry if you injured your eyes when you rolled them so hard from reading the phrase "the lingua franca of pro wrestling."

Anyway, Brooks hates Trump because he behaves like new money even though he's not, but what he really wants to talk about is how it is time for Marcomentum. Yes, even though Marco finished third in a race where he was pretty much predicted to finish third, Brooks wants you to know that this is the dawning of a new era.

The amazing surge for Marco Rubio shows that the Republican electorate has not gone collectively insane. At the last moment, and in a state that is not naturally friendly to him, a lot of Republicans showed up to support a conservative who could conceivably get elected and govern.

Marco Rubio now has his moment. He is the only candidate who can plausibly unify the party. Desperate Cruz-hating Republicans will turn their faces to him.[...]

The Republican Party usually nominates unifying candidates like Marco Rubio. The laws of gravity have not been suspended. He has a great shot. But he has to show one more burst of imagination.

Jesus Christ, David. All this surging and bursting is not what we want to see when we open the virtual pages of our family-friendly New York Times. Also, we feel compelled to point out yet again that the love of your life finished third. Third. THIRD. Declare your undying love if you must, even though it kinda grosses the rest of us out, but don't pretend Rubio's completely adequate showing is evidence of a great turning tide. Keep your fantasies to yourself from now on, please.