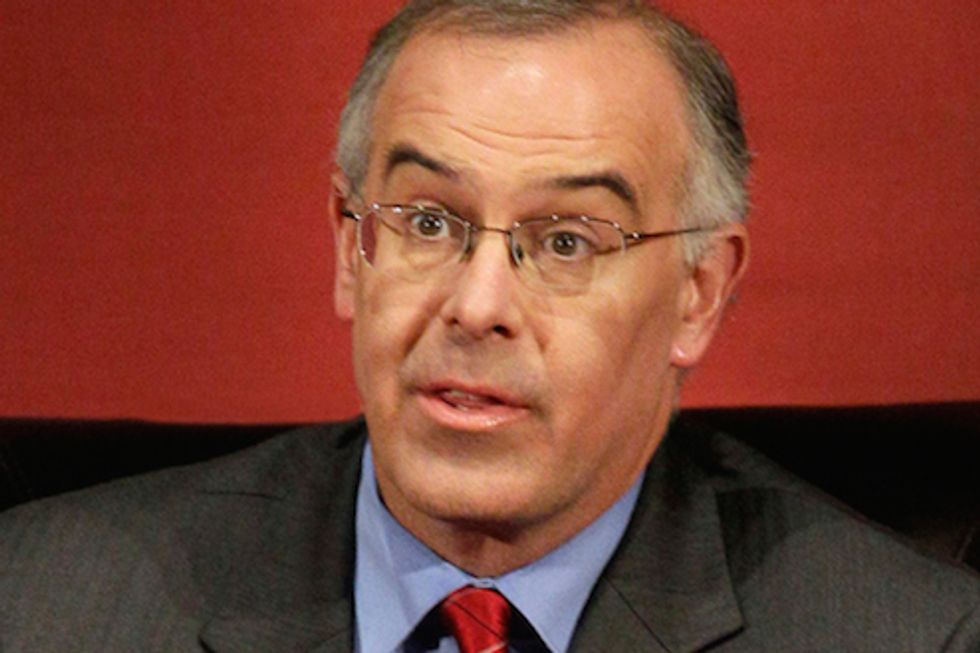 He needs a hug. Again.

Poor David Brooks. Spiraling ever downward into his midlife crisis, which for some reason he is paid to liveblog weekly at the New York Times, he inflicts upon us once more his struggle to understand how and why his sad devotion to that ancient religion of Moderate Conservatism has not helped him to sway primary voters away from, for example, "the pagan brutalism of Ted Cruz," and to instead support some mythical Republican candidate (like Marco Rubio!), who is reasonable and kind and decent and also very manly and tough and basically Barack Obama, but for the right.

Thus, Brooks wistfully recalls a more civilized age, when Barack Obama was still president, restoring honor and dignity to the White House, before the Dark Times of the GOP primary to replace Obama, who is, from a certain point of view, still president:

As this primary season has gone along, a strange sensation has come over me: I miss Barack Obama. Now, obviously I disagree with a lot of Obama’s policy decisions. I’ve been disappointed by aspects of his presidency. I hope the next presidency is a philosophic departure.

But over the course of this campaign it feels as if there’s been a decline in behavioral standards across the board. Many of the traits of character and leadership that Obama possesses, and that maybe we have taken too much for granted, have suddenly gone missing or are in short supply.

"We" hate to state the obvious, but some of "we" have never taken Barack Obama's decency for granted. However, "we" are not David Brooks, who, despite his deep love and support for Obama before he ran for president, has spent Obama's years in the White House cataloging all the ways Obamasux -- though of course in a far more eloquent manner that befits the great and powerful op-ed pages of the NYT. But now that Obama is gone, Brooks has discovered so many qualities he misses:

The first and most important of these is basic integrity. The Obama administration has been remarkably scandal-free. Think of the way Iran-contra or the Lewinsky scandals swallowed years from Reagan and Clinton.

What else does Brooks miss about the former-but-still-current president?

[A] soundness in his decision-making process. Over the years I have spoken to many members of this administration who were disappointed that the president didn’t take their advice. But those disappointed staffers almost always felt that their views had been considered in depth.

If only Brooks had known then what he knows now, he might not have declared in July 2009 that because of the president's failed stimulus package and doomed foolish attempt to reform healthcare, we were witnessing "the early stages of the liberal suicide march," with no one able or willing to "stop this leftward surge," except for perhaps the "brave moderates" known as Blue Dog Democrats, who are all but extinct now.

Brooks also pines for the days of Obama's "grace under pressure," which Brooks's new man-crush Marco Rubio lacks -- but in an endearing way:

Fourth, grace under pressure. I happen to find it charming that Marco Rubio gets nervous on the big occasions — that he grabs for the bottle of water, breaks out in a sweat and went robotic in the last debate. It shows Rubio is a normal person. And I happen to think overconfidence is one of Obama’s great flaws. But a president has to maintain equipoise under enormous pressure. Obama has done that, especially amid the financial crisis. After Saturday night, this is now an open question about Rubio.

If only "we" had not taken the president's confidence and grace under pressure for granted back in, say, 2014, when "we" saw only the inadequacy and weakness of the president's manhood:

While David Brooks might once have imagined, about a month into the president's first term, that his naively optimistic plans to save America would inevitably lead to the total destruction of America, now -- alas, too late -- Brooks longs for the president's "resilient sense of optimism," nowhere to be found among today's crop of dirty-minded NSFW candidates:

To hear Sanders or Trump, Cruz and Ben Carson campaign is to wallow in the pornography of pessimism, to conclude that this country is on the verge of complete collapse. That’s simply not true. We have problems, but they are less serious than those faced by just about any other nation on earth.

Let us pause for a moment to give David Brooks the approving back clap he clearly seeks for the cleverness of his phrase "The pornography of pessimism." And now let us extinguish the words "David Brooks" and "pornography" from our beautiful minds forever and move on to his conclusion of gratitude for Obama's scandal-free small-balled gentleness:

Obama radiates an ethos of integrity, humanity, good manners and elegance that I’m beginning to miss, and that I suspect we will all miss a bit, regardless of who replaces him.

We might be inclined to tell David Brooks the good news: that President Obama is not actually gone yet. But no, we enjoy drinking Brooks's self-pitying tears far too much. They are oh so delicious.