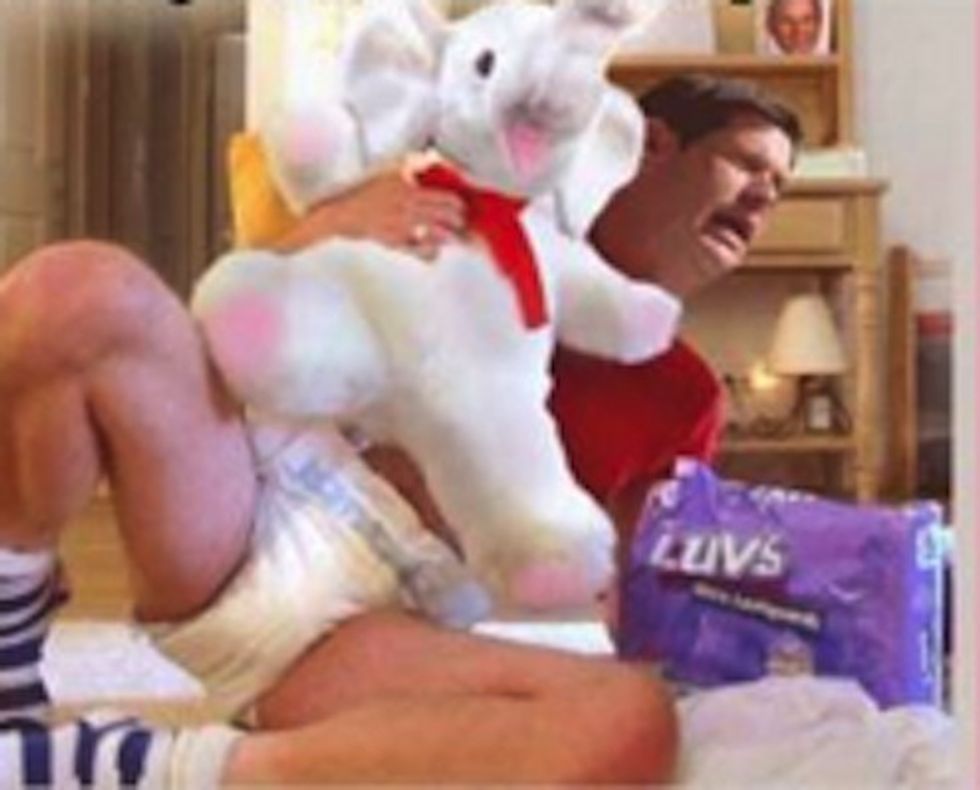 Less than a week from a likely humiliating defeat in the race for Louisiana governor, Sen. David Vitter (R-Whore House) is continuing to make dirty diapered love to that family values chicken he really ought to have left alone by now. While Vitter is officially, technically, legally, and biblically the last person in America who should speak of such things, last week he gave a moving speech to the Jefferson Baptist Church in Baton Rouge about how homos and The Left are crushing his and every other Christians' religious freedom and undermining the sanctity of traditional marriage between one man, one woman, and however many prostitutes Vitter has screwed and perhaps even knocked up. Allegedly.

The left in America is trying to push people of faith out of the public square. Say, “Oh, you can pray in church, you can pray at home, you can pray in a closet, but don't, for goodness sake, put that on display in public in any way, shape, or form." In some cases, that's leading to demands that others' views — for instance, on gay marriage — be shoved down the throats of folks who have sincerely held religious views that marriage is between one man and one woman.

How is it possible that after all these years of The Left mocking the tap dancing crap out of Sincerely Religious Dicknozzles for their complaints about having The Gay "crammed" and "rammed" and "shoved" down their throats -- like a big gay cock -- they are still doing it? It's really quite thoughtless of them, when you think about it. We grew tired of pointing and laughing at them for their OH MY GAWD SO BAD choice of words years ago.

Vitter also claimed that the Supreme Court's decision on gay marriage, which has settled the issue of marriage equality, is only the beginning of the "growing battle" and will force hypocritical Bible-humpers like him to experience severe cases of butthurt.

That decision will clearly unleash all sorts of assaults against conservative Christian believers who believe that marriage is between one man and one woman.

Because it seems the Vitter campaign is hell-bent on trolling the crap out of us snarky types -- see, for example, his recent "sorry about my sexgate" ad originally titled "Hard Times" -- Vitter gave us this irresistible nugget:

Ten years ago, I'm not sure that I would have predicted these religious freedom issues would be so much under siege, but they are.

It's possible that 10 years ago, Vitter wouldn't have predicted The Left would "persecute folks who simply want to live their faith in terms of how they do business and other things" because he was too busy trying to protect his "traditional marriage" from all those growing rumors of his various illegal infidelities, which he ultimately kinda sorta vaguely apologized for in 2007.

Ah, but that's supposed to be behind us now, and Vitter is sorry, and his family has forgiven him, so please elect him governor, Louisiana, so that he can support legislation to protect persecuted Christian florists and bakers and prostitute bangers like David Vitter.