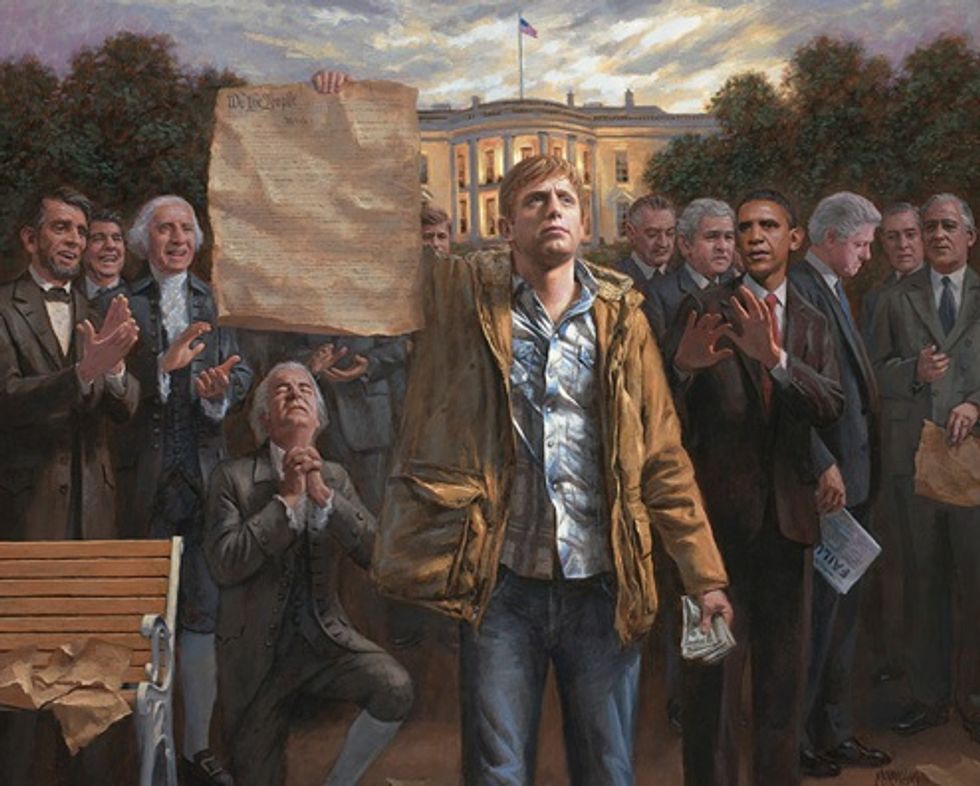 The Tea Party finally noticed that it turned fivelike a week and a half ago, so what could these insurgent grassroots heartland Willy Lomans do but get together with a bunch of Senators and millionaires in Washington DC to celebrate? Michelle Cottle of the Daily Beast was there, gulping the very same air as Rand Paul, Ted Cruz, Mike Lee, Michele Bachmann, Louie Gohmert, and other ones.

Ms. Cottle tips her wry liberal hand early on: "Martial language flowed thick, and variations on the word “tyranny” were hot, hot, hot." But while she may be lamestream to her core, we don't doubt that she overheard much talk of sanguinary horticulture, second amendment solutions, and letting God sort 'em out.

Then things get weird.

As someone who campaigned for Ronald Reagan back in the day, he reminded the crowd, “I feel certain he would be enormously proud of you.” (Though that was nowhere near as unsettling as when Breitbart’s Steven K. Bannon announced he felt “the presence” of his old boss, Andrew Breitbart, “in this room.”)

Now, it's been conclusively demonstrated that a huge part of the contemporary conservative "movement" in this country is "an elaborate moneymaking venture." But this DC event, though, hoo boy. Next level.

For the most part, however, the day was all about flattering the assembled—even as they were urged to never, ever, ever give up. “Many of you may be wondering if it’s worth it,” cooed Mark Levin. (Message: It is!) Or as Sen. Lee posited, “Many of you may have been told that this is a lost cause.” (Message: It’s not!)

Really, that money you are giving us? Keep doing that. It's going to work. The Obamacare, we are going to do the repeal on that. The gays, and the minorities (most of them) and the undeserving poor, trust us, we'll beat 'em all. You may have read that most Americans don't agree with you, but I am here to tell you: Most Americans agree with you! Can you write your email address here? It's for freedom, plus maybe you want to buy some diet scams, and boner drugs? Freedom.

At this point, is there any difference between people who attend Tea Party events and historical re-enactors, besides an ability to distinguish fantasy from reality? Costumes, maybe? Oh yeah. Never mind.