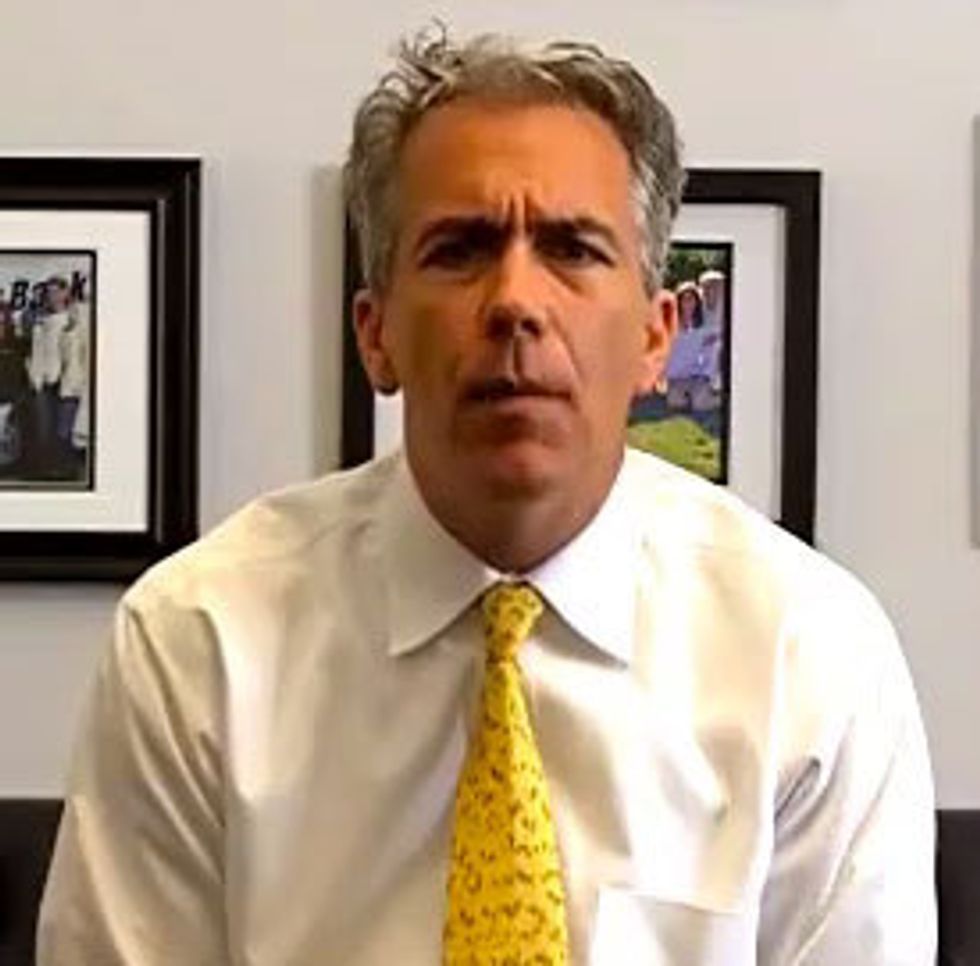 Even the most casual reader of the Intertubes is aware that former Rep. Joe Walsh (R-DEADBEAT) is pretty much one of the worst people in the history of ever. (Yes, yes, we know: Hitler, Stalin, and Dick Cheney are much worse and belong in their own category of Even Worse Than Joe Walsh.)

But aside from the perpetrators of genocide and vice presidents who shoot their buddies in the face and then blame the guy's face for being in the way, Walsh is pretty rotten. He's a deadbeat dad who thinks gay homosexuals are bad for children. (Oh, and he'll even threaten to sue anyone who points out the FACT that he's a deadbeat dad so come at us, Joe!) He hates when veterans who've given their limbs to defend his right to be a douchebag go on and on about their service. He refuses to get a real job. He's even a deadbeat driver.

And now, apparently desperate to secure his place in the Shitbag Hall of Fame, he has rewritten Martin Luther King Jr.'s "I have a dream" speech. (He posted it on his own website, but no, we will not provide a link, because fuck that guy.) And oh sweet merciful Zeus is it ... well ... exactly what you'd expect from a scumsucking piece of bacteria-ridden filth like Joe Walsh.

Today marks the 50th anniversary of Martin Luther King, Jr.’s iconic “I Have a Dream” speech during the March on Washington for Jobs and Freedom in 1963. [...] In the build-up to this momentous occasion, many people have invoked King’s legacy to promote their own various causes.

Yes, we noticed. Like how Kathleen Parker claimed Martin Luther King Jr. would really want President Obama to STFU about race because talking about race is just so racist. Or how the editors at the cesspool that is the National Review Online want to remind everyone that the civil rights movement is basically about conservative principles, even though "[t]oo many conservatives and libertarians, including the editors of this magazine, missed all of this at the time" and also have you seen how terrible black people are lately?

But of course that's not the co-optation that bothers Walsh. Oh no. He is, however, quite put out that "our commander-in-chief usurped King’s dream to selfishly promote his own legacy." Also, he does not care for "our country’s race-baiter-in-chief, Rev. Al Sharpton" talking about the Supreme Court's ruling on the 1965 Voting Rights Act, because talking about that is DEFINITELY racist against racists or something.

That's all just prologue, though, because the real point of Walsh's post is that he, just like Martin Luther King Jr., also has a dream, and it's basically like Dr. King's dream, if Dr. King dreamed that African-Americans would stop sucking so much.

Are you ready, boys and girls, to venture into the sick-and-twisted-in-need-of-ALL-the-therapy fantasyland of Joe Walsh? Neither are we, but fuck it, let's do this thing anyway. With annotations, OBVIOUSLY.

I have a dream that all black boys and girls will grow up with a father.

Obligatory pause to remind you, in case you'd forgotten, that Joe Walsh is literally a deadbeat dad who maybe is not the best person to opine on fatherhood. Okay, then, let's continue.

This is quite a recurring theme in Joe Walsh's dreams. Earlier this year, when discussing the murder of Trayvon Martin, he insisted that it had nothing to do with race, no matter what "race hustlers" like Al Sharpton and Jesse Jackson said, and encouraged everyone to instead "focus on the black on black crime."

Please, black men, don't have kids until you have a job. But if you happen to not have a job, maybe you can follow Walsh's example and go to court and whinesplain to the judge how you totally shouldn't have to support your kids because it's not your fault that you don't have a job because you used to have a job but then your employer (aka, the voters) decided you suck so hard at your job that you got yourself fired, but that is NOT YOUR FAULT.

I have a dream that young unmarried black women will say “no” to young black men who want to have sex.

I have a dream that today’s black leadership will quit blaming racism and “the system” for what ails black America.

Yeah, Obama and Sharpton and Jackson, stop whining about racism like it's a thing, when it is so obviously not a thing, as evidenced by noted race theorists like Kathleen Parker and Joe Walsh saying it is not a thing.

And this -- the conclusion when Joe dreams that black America will stop being plantation slaves -- is when we must leave the sick-and-twisted-in-need-of-ALL-the-therapy fantasyland of Joe Walsh and immediately go drink all the bleach.