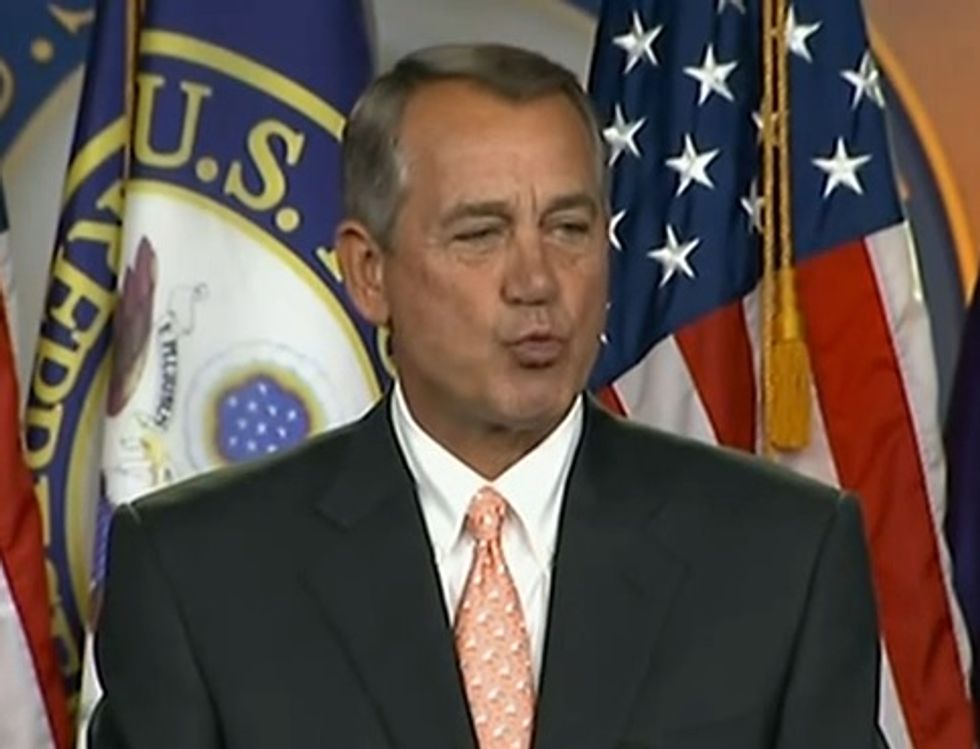 It has been a while since we pretended we didn't already know the answer to the question: Do Americans like Congress, yes or no? Last time, the answer was "HAHAHA, you're joking, right? I'd rather have head lice and a root canal!" (Not joking. That was the answer.) That was almost two years ago, before Republicans won the Senate and took complete control of Congress, with all their neat ideas about killing jobs and Obamacare and the environment and whatever other shiny thing is in front of their faces.

So certainly Americans' approval of Congress's bang-up job of Congressing must be higher than the tragicomical 19 percent Gallup reported at the time. Tell us, Gallup, how much more Americans love Congress now:

Now on August recess, members of Congress returning to their districts may receive a skeptical reception from constituents, as 14% of U.S. adults approve of the job Congress is doing, down slightly from 17% in July.

Awwwwwkward. And as for the two Idea Men, Speaker John Boehner and Majority Leader Mitch McConnell? Do you think Americans are giving them the thumbs' up for their great leadershipping? Not even remotely. In fact, the more Americans have of Boehner, the more they can't stand him.

The Senate's fearless leader isn't quite as disliked as Boehner, but as Gallup notes, that's only because people don't even know who the hell he is:

McConnell is a less well-known figure than Boehner, with nearly four in 10 Americans (37%) saying they have not heard of the senator or registering no opinion of him. McConnell saw his influence on Capitol Hill expand in immeasurable ways after the 2014 midterm elections gave his caucus 54 seats, making him the Senate majority leader. But this promotion has done little to elevate his brand with the American public -- nearly twice as many see him unfavorably (41%) as favorably (22%), comparable to ratings of the past several years.

But all of that seems like good news compared with this part. Laugh with us, won't you?

Although Boehner and McConnell lead the two chambers that often stand in opposition to President Barack Obama, the GOP faithful are hardly enthralled with them. [...]

Indeed, the main congressional leaders -- House Speaker Boehner and Senator Majority Leader McConnell -- are not only unpopular figures with the public at large, they are also not particularly well-received even among Republicans.

Not that we are surprised, since another recent poll we told you about found that Republicans are starting to hate themselves, for sucking. And as Republican leaders in Congress continue to push an agenda that is really unpopular -- like, you know, their whole agenda -- well, we just can't imagine those approval numbers are going to go up any time soon. On the plus side, they can't go much lower.