Dear Jimmy Carter: Get Some Rest, Feel Better, And Get Back To Building Houses, OK? 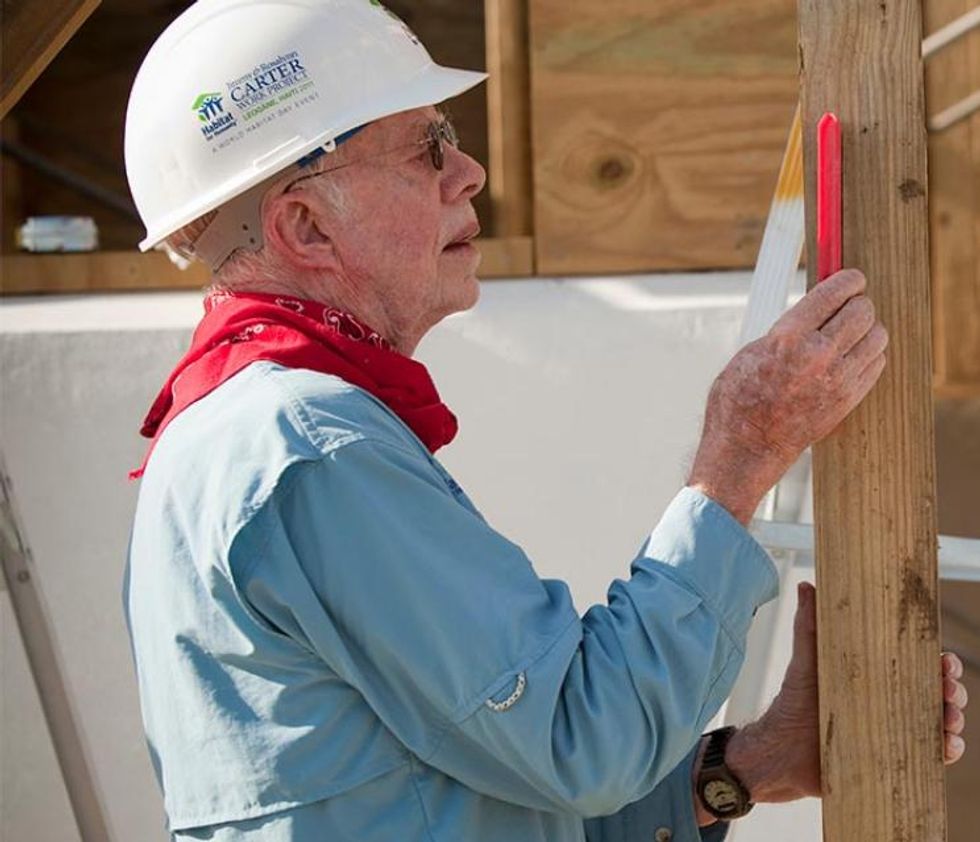 Measure twice, cut once, and hydrate today for a better tomorrow.

Jimmy Carter was building a Habitat for Humanity house in Winnipeg this morning, just generally being his badass 92-year-old best-former-presidential self and cutting some wood for a staircase with a handsaw, when he collapsed due to dehydration and was rushed to a hospital. Carter had been working in the sun for about an hour with his wife and best pal Rosalynn, according to a witness. His bodyguards took him to a nearby vehicle, and then an ambulance got him to St. Boniface Hospital.

A Habitat for Humanity spokesperson said the hospital trip was a precaution, and Carter said he was feeling fine while he stayed there for observation:

"He's asked us to continue with our day," said Jonathan Reckford, CEO for Habitat for Humanity International.

"He encourages everyone to stay hydrated and keep building."

The Carters were in Winnipeg as part of a Habitat for Humanity "blitz" aimed at building 150 houses across Canada to celebrate Canada's 150th anniversary.

President Carter had gone to Canada to promote -- and of course, build -- affordable housing in the face of rising housing costs:

“Housing affordability in Canada is at an all-time low. We are proud supporters of Habitat for Humanity and grateful to everyone who is joining us in our efforts to bring affordable housing to families across the country,” Carter said.

[wonkbar]<a href="http://www.wonkette.com/596721/jimmy-carter-ditches-dumb-cancer-will-live-forever-now"></a>[/wonkbar]You know who has stamina? That guy with the hammer in his hand. You don't see him taking every weekend to golf, and he's damn sure not going to take a golf cart when all the other world leaders are walking. Jimmy's got Sunday School to teach, and houses to build, and for that matter, cancer's ass to kick. Get well soon, Mr. Carter, rest up some, and we'll see you back at the work site soon.

And now it's your open thread!

Yr Wonkette is supported by reader contributions, so click the buttons below to fund us! Also, we bet Jimmy Carter could kick all our asses.