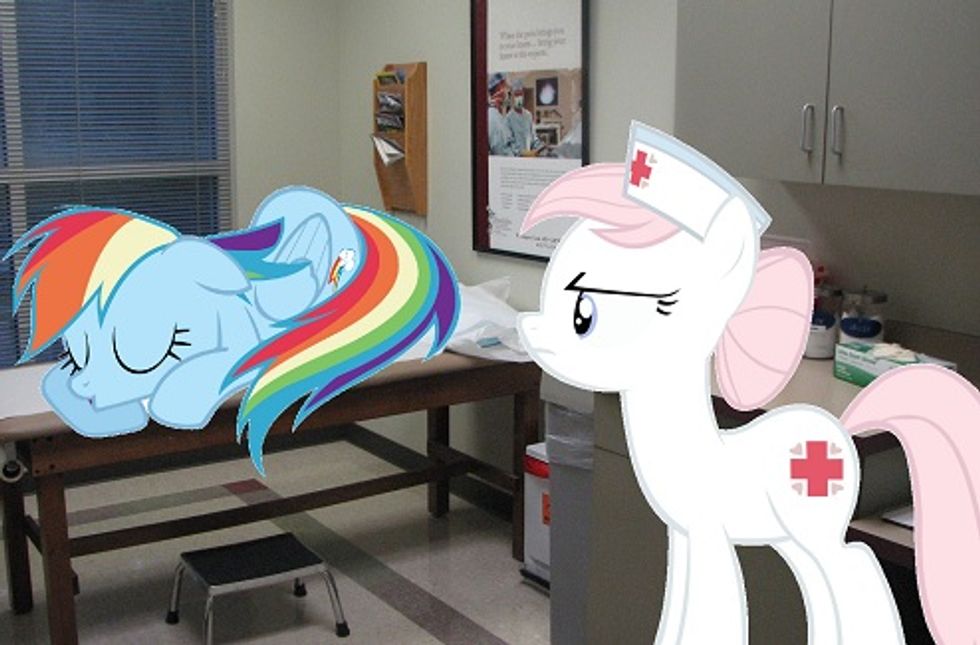 If there's anyone we can trust for her expertise on health care policy, it's Betsy McCaughey, the geniuswho decided that if Medicare pays for seniors to meet with a doctor to discuss living wills, that's a DEATH PANEL. That's a hell of a lie, and really, there's no way she could hope to top it. But there's still plenty of stuff to lie about, so how about this? In Sunday's New York Post, McCaughey warns that as soon as Obamacare goes into effect, The Government will require every doctor you visit to ask intrusive questions about whom and how you are sexing:

‘Are you sexually active? If so, with one partner, multiple partners or same-sex partners?”

Be ready to answer those questions and more the next time you go to the doctor, whether it’s the dermatologist or the cardiologist and no matter if the questions are unrelated to why you’re seeking medical help. And you can thank the Obama health law.

We know that this will happen, because ... well, she can't actually identify where the ACA says that, but it's scary, isn't it? Are you scared yet? Obama is going to probe your sex life, and it sure is a relief to know that Republicans don't want to intrude on your privates.

Somehow, McCaughey has turned the ACA's requirement that medical records be standardized and accessible by computer into a mandate that your dermatologist must ask you how often you have sex in the butt. And she found a doctor who agrees!

“This is nasty business,” says New York cardiologist Dr. Adam Budzikowski. He called the sex questions “insensitive, stupid and very intrusive.” He couldn’t think of an occasion when a cardiologist would need such information — but he knows he’ll be pushed to ask for it.

See, he knows this! It is a bad thing!

The president’s “reforms” aim to turn doctors into government agents, pressuring them financially to ask questions they consider inappropriate and unnecessary, and to violate their Hippocratic Oath to keep patients’ records confidential.

Embarrassing though it may be, you confide things to a doctor you wouldn’t tell anyone else. But this is entirely different.

Gosh, that sure is dire! And where exactly are these sex questions required? Tell us, Betsy, tell us!

Doctors and hospitals who don’t comply with the federal government’s electronic-health-records requirements forgo incentive payments now; starting in 2015, they’ll face financial penalties from Medicare and Medicaid. The Department of Health and Human Services has already paid out over $12.7 billion for these incentives.

Um. Yes, and that's where the sex questions are mandated? Where, exactly?

Dr. Richard Amerling, a nephrologist and associate professor at Albert Einstein Medical College, explains that your medical record should be “a story created by you and your doctor solely for your treatment and benefit.” But the new requirements are turning it “into an interrogation, and the data will not be confidential.”

Yes, we see, an interrogation! Like when the nurse asks what your symptoms are and what meds you're on, or what you've been eating, that's an interrogation, too! Now, what exactly are those "new requirements," and where was HIPAA confidentiality overturned? And where can we look this up, anyway? You'll tell us, won't you?

Lack of confidentiality is what concerned the New York Civil Liberties Union in a 2012 report. Electronic medical records have enormous benefits, but with one click of a mouse, every piece of information in a patient’s record, including the social history, is transmitted, disclosing too much.

The social-history questions also include whether you’ve ever used drugs, including IV drugs. As the NYCLU cautioned, revealing a patient’s past drug problem, even if it was a decade ago, risks stigma.

Aha, so the NYCLU warned that Obamacare would require all doctors to ask you about your sex life! Except for the part where they said nothing of the sort. Why, a fool might even think that they were making recommendations to improve the privacy of electronic medical records, instead of saying that they should never be used...

Still, it's kind of cool that Betsy McCaughey is such a good friend of the ACLU now; that's good to know. And she has some perfectly sensible advice that will make doctors just LOVE their Obama-hating patients:

Patients need to defend their own privacy by refusing to answer the intrusive social-history questions. If you need to confide something pertaining to your treatment, ask your doctor about keeping two sets of books so that your secret stays in the office. Doctors take the Hippocratic Oath seriously and won’t be offended.

Nope, doctors just LOVE it when patients say "I don't have to tell you that, government stooge! Stop your interrogation immediately! You can take my blood pressure, but you'll never take my FREEEEEDOOMMMMMM!!!"