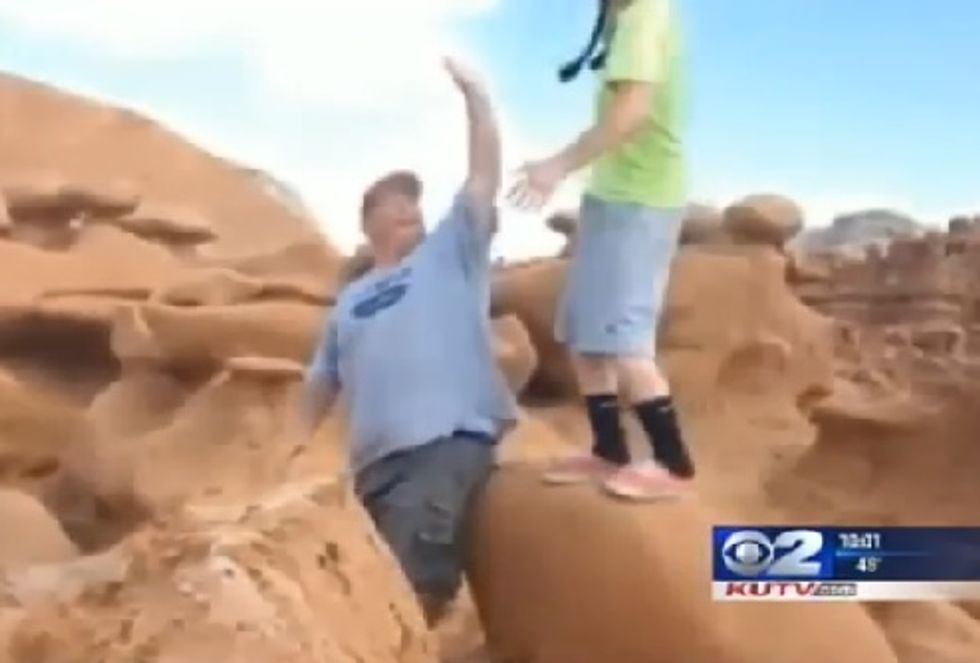 You may recall the inspiring tale ofcan-do Utah Boy Scout leader hero man Glenn Taylor, who with a little help from his son and a friend brought an end to the reign of terror of a 20-million-year-old rock formation in Goblin Valley State Park, knocking it to the ground so that it couldn't kill a hypothetical little kid someday. WELL! As it turns out, Glenn Taylor is even more self-sacrificing than we first thought: he managed to knock that massive boulder off its perch even though he suffered crippling injuries in a 2009 car crash. A Salt Lake City TV station reports that in September, Taylor filed a personal injury lawsuit, claiming that he injured his back and has had to "endure great pain and suffering, disability, impairment, loss of joy of life."

We're not sure if the video shows a man in great pain, or evidence of a miracle healing.

If you look carefully, you can see that just as the boulder falls, Taylor shrieks in obvious agony, making distressed "HAHAHAHAHAHA" and "WOOHOO!" sounds and raising his arm to receive aid from his son Dylan, in the form of a high-five. His face is contorted in a grimace that some might mistake for a shit-eating grin.

Also worth seeing is the Salt Lake City teevee report, which cannot be embedded because the video is stupid. In it, reporter Chris Jones asks Taylor about the lawsuit: Taylor acknowledges that it exists, and then when Jones says, "You don't look very debilitated in that video," Taylor replies, "You didn't see how hard I pushed."

Jones says, "It looked like you were pushing pretty hard," and you can almost see Taylor's eyes focus on little cartoon dollar signs with wings, flying away from him as he says "You don't have my authority to put this on the news."

Taylor's attorney, Mark Stubbs, says that the poor guy is very definitely injured, although he admits the video may not "play well" for a jury.

No telling whether Taylor will now sue Utah's state parks department for allowing the boulder to tempt him into pushing it, causing him to lose the other case and to become a national laughingstock. Regardless of the outcome of the personal injury case, we would just like to point out that the state park still has plenty of rocks left.