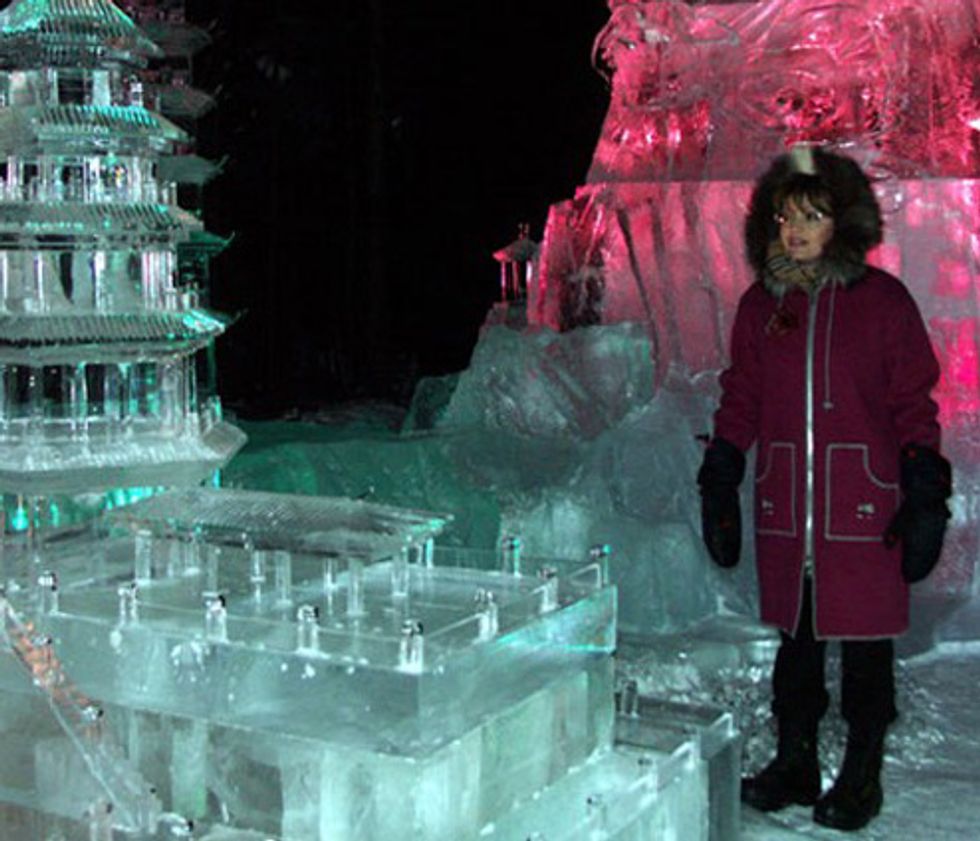 Here is more fun typing from our contributor, Bilbo!

Thankfully for the world, and reality, CPAC somewhat peacefully come to an end Saturday afternoon, at least the official administrative meeting and speechifying and seminaring and workshopping "official schedule" part of it, and it seems to have ended with the world intact, and no signs of the four horsemen of the Apocalypse, which is about the only positive thing to say at this point. Because this monstrosity of a "conference," in all of its full unrealistic, surreal, dishonest, slanted and bizarro glory, has ended with what else but a horrifying, terrifying, completely lie-filled distortion of time, space and reality in the form of a "speech" by one of the more grotesque symbols of CPAC terror, Alaska's own mamma grizzly, Sarah Palin.

From 4:42 p.m. until about 5:19 p.m., if you can imagine surviving that long, Palin speechified in the Marriott Ballroom at the Marriott Wardman Park Hotel Wonderland Amusement Park [& Conference Centre -- Ed.] about all sorts of truth-defying, lie-inducing, reality-denying, delusion-inspiring wonders of unreality. Thus the only way to accurately, objectively--yes, objectively--report on this delusion is call it Deconstructing Sarah Palin.

Palin, as if running for something other than Reality Show President of the World and Conservative Conference Speaker of the Year, tore into everything Obamaesque and tore it up with easy catchphrases about everything near and dear to her dwindling, equally delusional fan base--the extreme far-righters whose credo incredibly remains, in 2012, a political world continually centered around scarifying old reliables such as abortion, guns, religion, the military and big government. It is most interesting to note that 99 percent of what Palin said is completely, wholly, utterly untrue and a lie.

Palin said Obama "barely mentioned" unemployment in his recent State of the Union address. Wrong. In fact, the core and central point of the address was jobs, employment, manufacturing and getting people back to work. Of course the administration is focused on, and working on, employment and decreasing unemployment.

Palin said there has "never been" such a disconnect between a president and the populace. Wrong. Reference points: The Nixon, Reagan, Bush I and Bush II presidencies, especially, oh, the Nixon adminstration circa 1972 to 1974. Palin bashed Obama on the pipeline decision and the solar energy company decisions. Obama said the government needs more time to study the pipeline--which is smart--and the Obama administration worked to study solar energy as an alternate energy source--which, you guessed it, some Republicans have said the country needs to do. Of course.

Palin went on a crazed stream-of-unconsciousness rant and said Obama doesn't care about God or guns and women and religion. Wrong. Obama recently said in several interviews that he is a man of faith, he does go to church, he is for normal, civilized gun restrictions, and he supports a woman's right to choose. In that respect, he does indeed care about women very much. Palin said the Obama administration likes to share military secrets "with the Kremlin." That should be news to the Defense Department, the Homeland Security Department, the Justice Department and the 16 or 20 or so federal government intelligence agencies.

Palin's entire speech was one long delusional rant of someone who has not followed government and politics, who has not followed the news, and who has not followed exactly what the Obama administration has actually done. It was a speech of soundbites, media bites, far-right bites. Palin kept saying that "the door is open" to some new version of reality. But the only door that is open for Palin is the doors of unreality and the doors to her home on the range in Alaska--doors that she needs to walk through, settle in behind, and close tight behind her.

Meanwhile, the world will now sleep much better for the next year--until CPAC Horrorshow 2013 rolls around again.