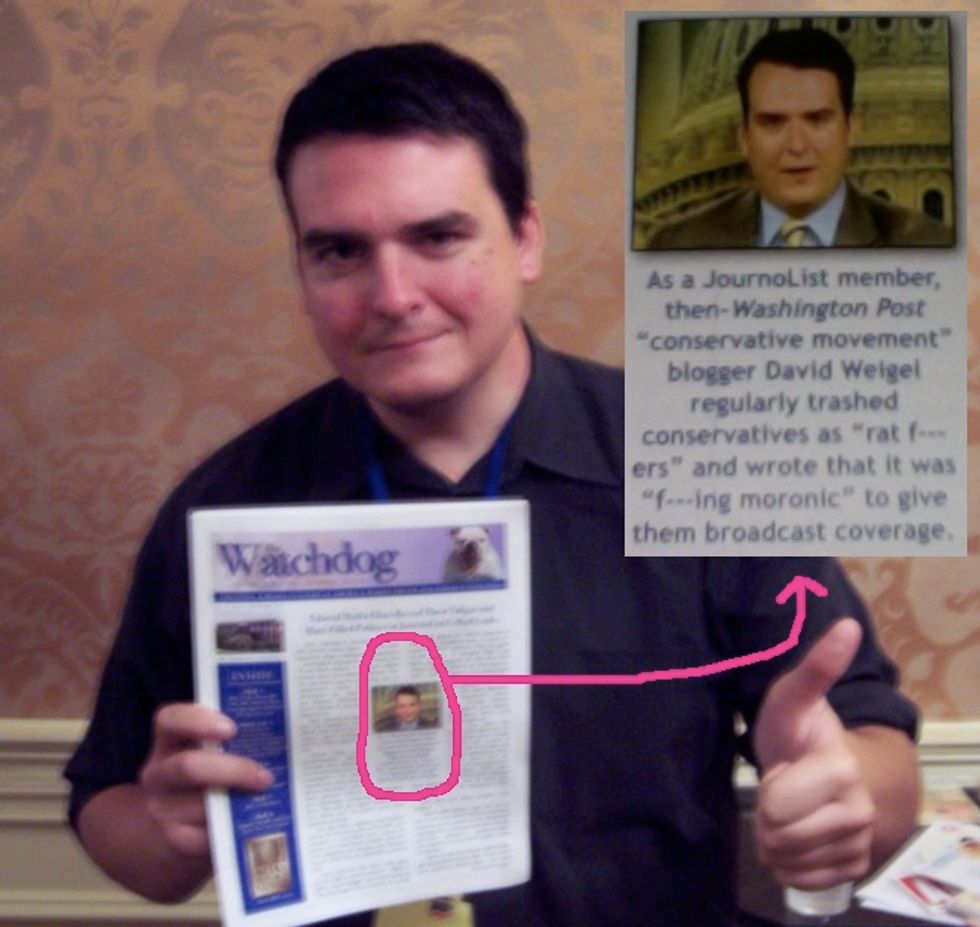 Vengeful mobs of Real Americans converged on DC this past weekend to enjoy the all-you-can-eat Freedom & Diabetes buffet at the Values Voter Summit. Even Christine O'Donnell stopped by to pout for money and talk about how her "love affair with liberty isn't tame, but boy is it good" -- cruel verbal foreplay that made the crusty white audience all hot and bothered. There was also plenty of fresh material from popular comedians such as Bill Bennett, Rick Santorum and Newt Gingrich. We were pleasantly surprised to see smug liberal elitist David Weigel walking around being smug, and somehow we even managed to cross paths with a delightful Furry.

The Furry really set the "mood," but the overall theme of this conference was definitely "Islam and the Homosexual Agenda are gang-banging America so hard," and also "November is our N-word."

Here is a truly haunting Snapshot of America by Photographer-Hero Jeff Malet. How on Earth was Mr. Malet able to capture this horrific reenactment of William Hogarth's "In the Madhouse"? We will never know.

Happy Quote #1: "We are going to have to choose, as a nation, between the homosexual agenda and freedom, because the two cannot coexist." -- Bryan Fischer, Director of Issue Analysis for Government and Public Policy at American Family Association and also a douchebag.

Oh hey did we mention Newt Gingrich spoke at this "family values" event? The fact that Newt Gingrich is a world-famous adulterer who has "snagged dome" from probably thousands of pre-cancerous soccer moms didn't seem to bother anyone, probably because Newt shoved an enormous syringe full of fentanyl-laced Pandering into the noodle of each and every Summit attendee ("We should have a federal law that says, under no circumstance in any jurisdiction in the United States, will sharia be used by any court to apply to any judgment made about American law"). Newt sure knows how to work a crowd.

Happy Quote #2: "This is not the America my generation has known. We grew up in a time of peace, a time of prosperity, with big dreams and bold risks. As the Berlin wall came down we sat in front of our televisions and saw the hunger for freedom from the heavy boot of government coming from East Europe." -- Unemployed Sorceress Christine O'Donnell, confusing everyone with her stories about teevee and Ugg boots from "East Europe."

Riley Waggaman, with Pedoduck. We forget what Pedoduck's sign said, but we think it said, "Congress likes to party in Pedoduck's party van." Oh Pedoduck, so coy.

Happy Quote #3:"We are not Islamophobes. We do not fear Islam. But we are angry at Islam." -- Bill Bennett, Islamophobe.

After listening to Bill Bennett scream like a maniac for probably forever, we hustled out into the lobby and had a fun photoshoot with David Weigel:

"Rat f[art]ers"? Mr. Weigel! Do you french your mother with that dirty mouth of yours? Well we certainly hope not.

Whether you think Christine O'Donnell is a virgin sex witch or not, can we at least all agree that this so-called "anti-establishment conservative movement" is nothing more than Scaring the Shit out of White America, which is the same strategy that has been used for 1,000 years? You know how it works: Frighten the dingbats with stories of half-Muslin bogeymen kidnapping America's fragile white women and forcing them to gay-marry the Koran, and also fart nonstop about "family values" while simultaneously trying to fingerbang everything that walks/zooms around on a scooter -- yeah, we're looking at you, Newt.

We shall end this tragedy with an uplifting Thomas Jefferson quotation:

"They call us wacky, they call us wingnuts, we call us We the People." -- Christine O'Donnell, the next Senator from Delaware.