Deleted Comments: Didn't You Know Trump Won, So All Politics Is Now Over? 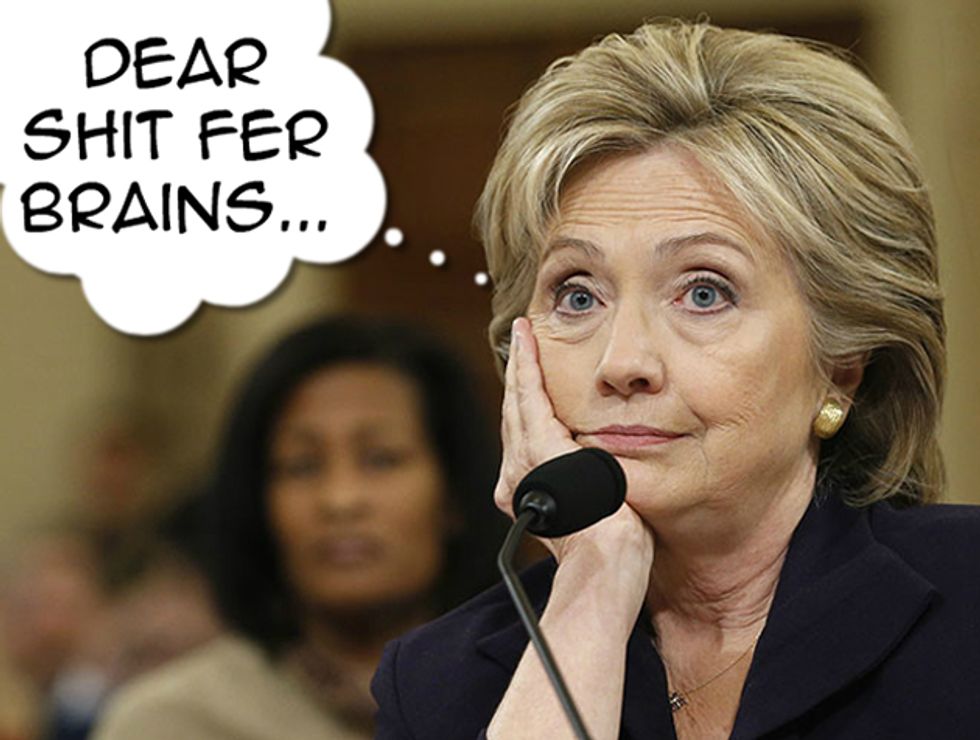 You mean to say the election is over? This is my shocked face.

Guys, we have some news for you, courtesy of our deleted commenters: Donald Trump won the 2016 presidential election, thereby settling all political questions forever, so why are there even still any of you progressives left? Maybe we should have warned you to sit down before laying that on you. Also, stop your crying, Meryl Streep, you are not brave, you are a loser! Or so says genuine old-school troll "Moshe Pipik," a Breitbart dweller who has Thoughts:

POOR VICTIM MERYL WORTH 65 MILLION DOLLARS. SHE WAS SO BRAVE TALKING TO A LIBERAL AUDIENCE.. NOW IS SHE SAID SHE WAS JOINING THE NRA THEN SHE WOULD BE BRAVE. SHE IS A LOSER. TRUMP WON GET OVER IT.

The people of the US voted. You blast Trump you blast half the country and you are all Jew Haters. Israel has 400 hydrogen bombs. get over it losre.

Also, don't mention the popular vote, because it doesn't count, and was inflated by all the illegal aliens:

MANY VOTES WERE ILLEGAL ALIENS WITH drivers licenses. Sorry Trump really had the popular vote otherwise and he campaigned differently. Anyway we win and you lose and we will make it so all liberals have to go in the oven.

Kellyanne Conway Says Meryl Streep Is The REAL Disabled-People-Abuser, This Is Our Shocked Face

She really sucks at damage control. Also, she lies a lot, and is a bad person.

We're going to see if you clever Wonket readers can detect a certain running theme with certain of our banhammered visitors this week, like perhaps "Brad Cole," who offered some thoughts on that same story about Meryl Streep and Kellyanne Conway's warning that Streep should be careful not to appeal to people's basest instincts:

It's almost as if he were angry about his candidate winning or something.

Ready to see a civil rights icon square off against...the opposite of that?

From "twopartysystem1," some perspective on the end of the election and the confirmation process for Trump's cabinet: Nobody cares what John Lewis or Corey Booker have to say about Jeff Sessions, because didn't you notice Hillary lost the election, and now Donald Trump gets everything he wants. Don't you people understand anything about how politics works?

You may be astonished to learn from "twopartysystem1's" Disqus history that John Lewis is not so much a "civil rights hero" as a "Lifetime government freeloader" who, exactly like John McCain, has been "Spinning a fifty year old story into an entire lifetime of gov't freeloading." On the other hand, we at least learn who "twopartysystem1" does like: Kellyanne Conway, who he says is "so whip smart, well-spoken and such a hottie!" Hmm.

Grab your Culture Guns, folks. We've got a war over a painting going on in Congress.

Our article on that painting that House Republicans have been lining up to remove from a hallway in the Capitol complex, since it incites cop-murder by depicting cops as animals, drew international attention from "Upsetti Spaghetti," who created a Disqus account just to call us to account, to critique art, and to explain why crime happens:

We were saddened to learn that "Upsetti Spagetti" was a longtime fan of Wonkette -- and of Dear ShitFerBrains, even -- who somehow thinks we'd demand censorship of art if it were racist. Heck no! If, like the painting in question here, a sitting member of Congress had chosen a high schooler's painting of black people as apes as the winner of a congressonal art contest for young people, our ire would be fully focused on the racist idiot Congressjerk for thinking that was a good idea. We might also say something about "false equivalence," were we so inclined. In any case, we're glad to know that Fox's program "COPS" has been such a fine cultural ambassador for America.

Sarah Palin Does Not Like Smearing Donald Trump With Pee

From reader "Cloris Clitoris," our piece on Sarah Palin's objection to Donald Trump's being smeared by Pee Hookers got a stern wag of the finger, because OH, SUCH LANGUAGE:

When an article contains the word FUCK over and over again, I know two things: they don't got shit in terms of an argument and they are butthurt to the max.

We would simply like to point out that, according to some dubious studies that are nonetheless fun to cite, people who swear a lot are smarter and more honest, so fuck off, to the max. Grody! Ah, but "Cloris" had far more problems with our little mommyblog, recipe hub, and secret clopfic emporium (the hidden password is "hoofwanking"). Why, "Cloris" wanted to know, are we even wasting time talking about Sarah Palin when Hillary Clinton's secret pizza-parlor child sex ring is still up and running?

Inevitably, someone asked "Cloris" to back up those decidedly eccentric claims, and was told, in classic troll form, "What? So lazy you can't do it yourself? Just go to #PIzzaGate on YouTube." And there we are, American public discourse in 2017. Not surprisingly, "Cloris Clitoris's" limited Disqus history is a sad trail of comments about the Illuminati PSYOPS and how the CIA sneaks secret messages into your TV programming.

And finally, a very, very disappointed comment from one Diane Emory, who wants to know what kind of credibility this Wonket Place even thinks it has, when it can't even use the English Language good AT ALL:

"Is our Democrats learning?" Am I expected to take seriously any news site that can't even use correct grammar in the first sentence?

So, we guess our Democrats is not learning, then. Or maybe it's our Republicans who is not learning. In any case, we're not doing your research for you. Google it yourself!