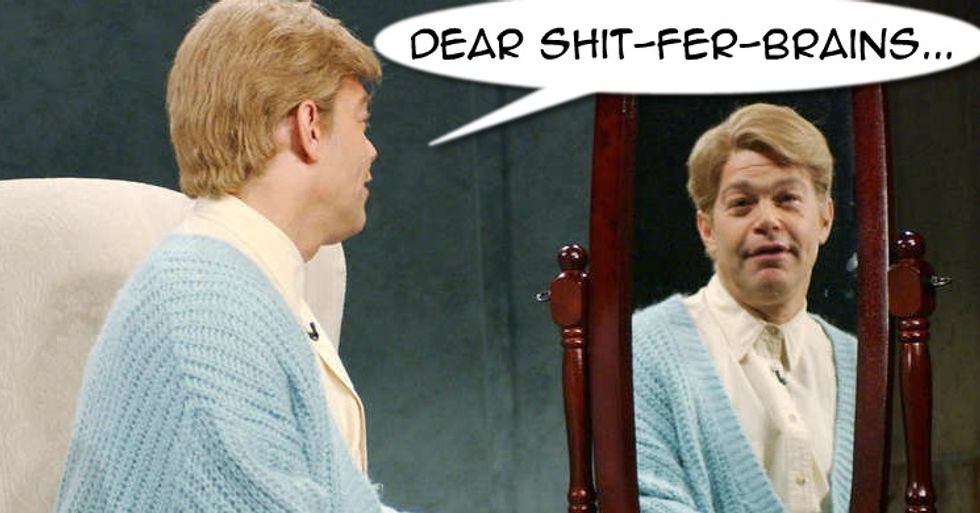 In all the fuss over Evan's unspeakable crimes against Sarah "Poot Lips" Sanders, Yr Friendly Neighborhood Comments Moderator initially missed a whole 'nother troll who made a gift of himself to our comments section a couple weeks back. But since the idiot went to so much effort to say the same thing over and over in several different threads before meeting with the banhammer (and since last week's trolls were such weak, sad poop -- I may have been on vacation, but I checked), it is with great queasiness that we bring you the refined trolling of one "Ross Vachon," who really, really does not like Al Franken.

Like, more than just your average dislike -- this "Ross" guy is freaking obsessed with Al Franken. Who, you might not be aware, is just like the great hypocrite of the French theater, Moliere's Tartuffe, in that he pretends to be a champion of the good, but has the basest motives imaginable:

A few things stand out about "Ross": He's really enamored of that comparison to Tartuffe, which proves he's A Intellectual. And he's frighteningly attached to Leeann Tweedon's description of Franken's "wet, slimy lips," which he lovingly cited at least six times during his brief visit here. "Ross" also seemed to be at least vaguely aware that Wonkette is a liberal mommyblog, so his comments here steered clear of some of the points he made about Franken elsewhere. At Bloomberg, he felt free to explain that unlike Donald Trump (falsely accused, you know) and Roy Moore (also innocent), Al Franken is the slimiest thing alive. A Jewish slimy thing:

Or at Breitbart, where "Ross" explained the essential difference between Al Franken and Roy Moore. No, it is not that Franken was accused of grabbing the butts of adult women while Moore was an accused child molester. Ross doesn't actually have a problem with grown men sexing teenagers, as he explains:

Yeah, "Ross" is really into that "poisonous toad" line, too, which seems vaguely familiar somehow...

And no, the bit about Franken claiming women "rejected him because he's a Jew" doesn't even seem to come from any of the usual online Nazi sources -- that' a "Ross Vachon" original.

No part of this discussion will be comfortable, but it is overdue.

Mr. "Vachon" has some really odd ideas about what misogyny even is -- basically, it means not being worthy of a hot lady like Leeann Tweedon, who Vachon approvingly notes, over and over again, posed in Playboy. Misogynists pretend to support women's rights so women will sleep with them, or at least get close enough to cop an unmerited feel. And "Ross Vachon" knows all about what healthy women want. They want "Ross Vachon," as he explained:

On the other hand, "Ross" knows the "truth" about Franken. Unlike sex god "Ross Vachon,"

Franken has resented and despised women since puberty. They have (except for that mousy wife of his) rejected him uniformly for 55 years.

As for people who might downplay Franken's crimes, for which he should spend the rest of his life in prison (yes, really) by suggesting his offenses are less serious than those of Donald Trump or Roy Moore, well, they're obviously just cultists. And physically unattractive cultists at that:

Yes this "champion of women" is trying the patience of his cult members (short, ugly schmucks who worship at the altar of mediocrity, misogyny, groping and violent "wet and slimy" kisses)

In fact, "Ross" had thoughts about what should happen to anyone who suggested that Al Franken might have any redeeming features whatsoever. To someone who said they "respected" Franken for resigning, and for his career as a whole, "Ross" appointed himself comment moderator for the day:

The poisonous toad is a bilious misogynist. If you respect him for that, you're a POS who should be banned from this site.

Take a wild guess who actually got banned?

"Ross's" comment history is, quite frankly, a bizarre mishmash of masks and contradictions. Lately, he's been all about those terrible liberal sexual harassers -- or at least, one particular subset of 'em, as he pointed out in a comment at Breitbart on sexual harassment accusations against director James Toback:

Go back as far as you want and you'll find similar stuff -- a full year ago, the guy had Thoughts on the deep connections between Jewish nerds and their insatiable desire for Aryan women.

And then there was this little Heil Trump at Breitbart, shortly before last year's election:

They called him racist, sexist, misogynist, fascist, anti-Semite, Hitler, and sexual predator, every label, libel, and smear their frightened little minds could conceive. And, yet here he stands, our man on a white horse ready to take this baby and run with it. The Establishment, Wall Street, the neocons, Israel, the Masters of Discourse - the Media have been in panic mode 24-7 warning us what a psycho he is from Day I. And yet here he stands. Rachel Maddow cries, George Stephanoolous weeps, Mark Zuckerberg threatens to ban us from Facebook and yet here he stands. On November 8th let's stand up as one and put the witch on a broom and send her to Bloody Hell. Let's put The Man On The White Horse into The White House and let's do it with Authority!

That's so close to a parody of rightwing bloviation it's hard to even take seriously. But the really important thing to remember is that "Ross" is a sex magnet to Jewish chicks:

Jewish hotties like me. And I like them. Maybe you're jealous. Also I work in the entertainment business, have done so since 1987, own my own home. More than half my clients are Jewish..I go to their kids bar and barmitzvah, everything. In real life, I enjoy my Jewish associations.

Not surprisingly, if you go back a couple years, you find him at Manosphere HQ, Return of Kings, explaining how he had such great game picking up a black gal, who reads Jane Austen, so don't you go calling him a racist, either. They've been happily married for years, he says. What she thinks of all the Jewish hotties throwing themselves at him, we'll just have to live without knowing.

Oh, and he also thinks the Catholic Church should go back to the Latin Mass. He's kind of a Renaissance dude that way.

In conclusion: Maybe you thought Roy Moore had no place in the Senate. But you're a poisonous toad and you're ugly.