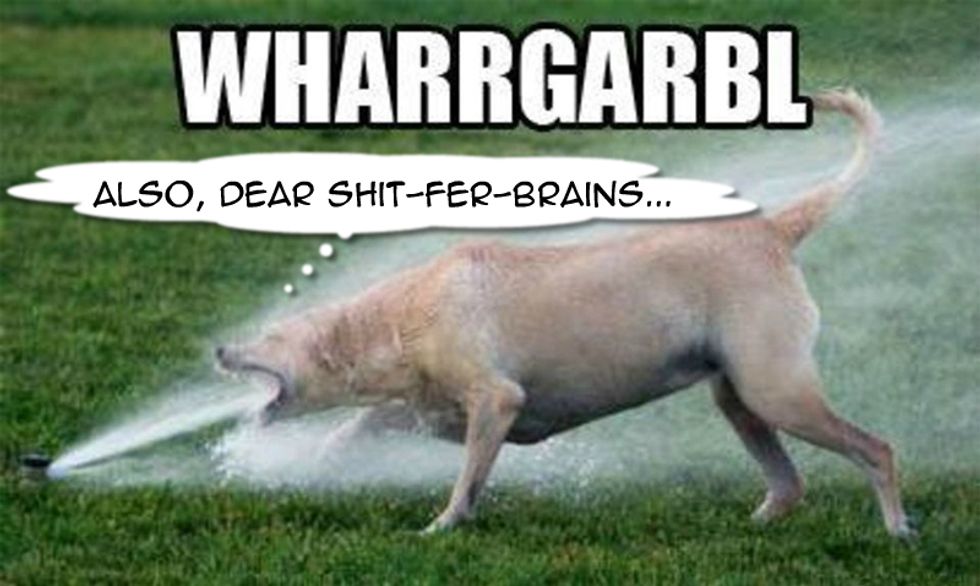 Maybe it's just us, but our Dear ShitFerBrainers seemed a lot less intelligible this week. Hence the WHARRGARBL doggie. But what they lacked in sense, they made up for in passionate intensity. Consider this series of wordblurts from "Adolph Wolfenstein" (subtle username!), who did not care one bit for a December article about Trump Spokestroll Kellyanne Conway, but just got around to complaining about it now:

YOU HAVE HURT KELLYANNE CONWAY'S FEELINGS!

It's UNFAIR AND MEAN to point out that she ran a racist campaign, even though it's totally true.

Why, yes, yes. We completely believe this idiot served during Vietnam. And that Kellyanne Conway is a genius, too, irregardless of how much she lies. We do have to say it's impressive how flocking together on Twitter and 4chan has taught all these dorks to sound pretty much the same, like a roomful of Milo Yiannopoulos clones. Also, the casual racism -- and casual rape! -- are so very hilarious.

Well then! Let us travel back to 2009 to see how people who were not snowflakes handled someone they didn't like getting elected!

Similarly coherent thoughts from "John" in reply to our piece on self-appointed Manners enforcer Tomi Lahren, who was shocked, shocked at all the SNOWFLAKES protesting the day after Donald Trump was inaugurated, even though he was duly elected by millions of hard-working Americans. "John" had some thoughts about how to make our nation a more perfect union, or something:

Is this not how a representative democracy works? We hold an election, and then the losers must shut up and be silent forever, because they lost. Ideally, they should be silenced by the police, because the winners won and that settles everything. It's right there in the Constitution, isn't it?

Just another day in the devil-worshipping Luciferian demon-possessed salt mines.

Our story about televangelist Rick Wiles and his discovery of the real reason Mike Flynn resigned as national security advisor (devil-worshiping, Luciferian, demon-possessed maniacs brought him down because he'd dared to speak the TRUTH about Pizzagate) brought this brief observation from "ross," who knows what's really going on:

Pizzagate is real, I really hope it blows up soon.

"Ross" was disappointingly vague about why Pizzagate is real, or how exactly it would bring a fundamental change to our political system when it blows up. A quick glance at his comment history makes a few things clear, though: People only protest against Trump because they're paid to, there's no hope for fools who believe the "Russia bit," and if you only did a bit of research, you'd know the Clinton hit list is real. He's really disappointed at how brainwashed everyone else on the internet is. It's a sad commentary on how our nation is failing.

Our piece on Donald Trump's historically low poll numbers for a new president brought out a couple of folks who agreed that Trump's popularity is actually through the roof, as proven by a single Rasmussen poll that found him with a whopping 55% approval rating. One of them, "hippobottom1023," had a good laugh at us stupid liberals before deciding that actually all polls are meaningless, but Trump is still awesome. Then he dropped polling altogether and proved that liberals are intellectually bankrupt because he spotted a punctuation error:

Silly fool doesn't even know it's LOL, not LoL!!!! Guess that means he's the real stupidhead! In any case, polling is dumb, but Donald Trump is really much more popular than the polls suggest, because you stupid liberals all need to get your GEDs, LoL! (As to the actual problems with polling in 2016, here's a pretty good piece by a lamestream media source, so don't read it, it's full of lies.)

Trump Might Send 100,000 National Guard Troops To Round Up Illegal Mexicans. Totally Normal.

Hey, know who ELSE rounded up lots of people?

Finally, we got a whole lot of angry comments from the "what part of 'illegal' don't you understand?" crowd, in reply to our Friday piece on a draft proposal to mobilize the National Guard as part of a deportation force, because that's the kind of country we are now. Or aren't quite yet, since it looks like the memo was a trial balloon, or at least something less than a fully worked out plan. Not that our correspondents would have minded -- they're probably deeply disappointed the military won't be busting down doors just yet. "Debbie O." doesn't even like having to know that people who think like us are even allowed to live in her country:

Fuck you.go move to Canada. What a bunch of pure tripe. This is exactly what is wrong with this country, people like you. Well go on, and be haters and see where that carries you in life

"Danny R." also wants us to know that this is a constitutional republic, Donald Trump won, and therefore those who don't like the election outcome all need to leave. (We aren't entirely sure these guys really understand how republics work, frankly):

President Trump will make America great for all you racist anti-American rhinos and liberals and sore losers also! And all you Ameraphobes that do not like our laws and constitution can go with them or learn that we are a Republic that elects our leaders by a constitutional way legally called the electoral vote and I and every other American live under laws so if you break the law boo hoo. Bad parents drag their children into something they knew was against the law when they did it not even getting into the millions they cost us! Go President Trump! Fifty five percent of America agrees with you and has youre back! And when the illegals are gone it will be more like seventy five percent!

Also notable: Danny R. thinks the Rasmussen poll interviews a heck of a lot of undocumented immigrants, which seems unlikely, since it usually leans Republican.

We also heard from "tgtrotter," who knows why we really have so many undocumented immigrants: It's all the liberals out there who hire them! We had never really thought of the agribusinesss and construction industries and Trump Tower as a particularly liberal bunch, honestly. But then tgtrotter decided our post about people fleeing the USA for Canada was fake news, because Canada has kick-ass border enforcement, and maybe the real problem is everybody, or something:

Why are liberals so obsessed with the profit motive and exploiting people in their factories and agricultural operations? It truly is a mystery. But if you want proof, just go down to MacArthur Park in downtown L.A. and see Freedom melting in the rain, all the sweet red, white, and blue icing flowing down.

"Marg Murr" had some classic all-caps thoughts on the proposal:

GOOD!! ROUND THEM UP AND GET THEM OUT. I NEED A JOB. MAYBE NOW I CAN FINALLY FIND ONE. GET THEM OUT AND KEEP THEM OUT. AMERICAN CITIZENS SHOULD ALWAYS COME FIRST IN EVERYTHING!!! GET THEM OUT!!!!!!!!!

And finally, some thoughts from "Monkey Sea," who knows that Donald Trump is actually loved by everyone and has huge approval ratings, plus other things. It's quite a lot of WHARRGARBL, and yes, this is all a single comment:

Who says his approval ratings are in the toilet??????? You?

You are just another butt hurt liberal who resorts to name calling. I am also willing to figure out any math problem that you have. I assure you I am quite good at math and I am "legal". Sooooooooooo, what does that make you?

Not a damn thing you can do about it.

Love the way he says not living near the border. Even if this was "real news" who cares where they are living if they are illegal. eff them. and as for this author..............what a nut job. The stories are not only fake but they are getting to be over the top hilarious. But I still keep my fingers crossed that he would use the military to remove the cockroaches from the U.S.

"Monkey Sea" also has a heck of a colorful comment history, including this gem from a sports blog in reply to a story about an ESPN commentator who used the term "gorilla" while talking about Venus Williams:

That's because baboon genes supersede human genes. She looks and acts like an ape. Groans and grunts like an ape and calling people racist has no effect on anyone anymore. All you dumb blacks don't realize that if you use a word that much when it shouldn't be used it becomes useless and ineffective. Who cares if you call white people racist...........it's all used up just like the race card.

He seems nice. He doesn't do "empathy" either -- in reply to a story about human traffickers preying on Central American women trying to reach the U.S., "Sea Monkey" somehow decided that the sex traffickers -- who aren't in the U.S. -- are precisely why we need to deport all the subhuman Latinos, especially their victims who've made it here:

And liberals wonder why we don't want these cockroaches in our country. This is a prime example of what they deem "normal". They will never be evolved humans. They will always be sub humans looking to leech off of the American people. Deport every last one of them.

We'd suggest that if anyone is noticeably lacking in human characteristics here, it's "Monkey Sea," but we probably shouldn't say anything, because after all, TRUMP WON, Bwahahahahahahaha!

Wonkette is ad-free and supported by Readers Like "Monkey Sea." Oh my god, we are just kidding, can you imagine? No, we are supported by readers like YOU.