Deleted Comments: No, Georgia Won't Make You Vote For A Party You Don't Like ... Yet 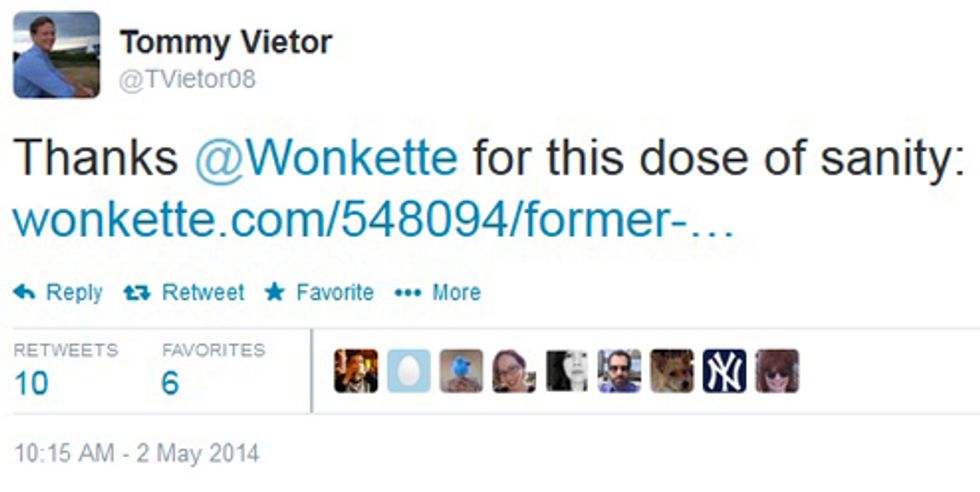 This time out, Dear Shitferbrains is happy to bring you something of a public service announcement, based on a note we got from someone on our side of the political fence. And so we adjust our tone settings from "withering sarcasm" to "gently chiding correction" (the "nice" setting got fried years ago). Our piece endorsing craptacular North Carolina Senate candidate Gregg Bannon drew this comment from "Psychobroad," who was concerned about the possible negative consequences of our suggestion that readers should vote for the crazypants wacko. Psychobroad warns,

Wonketeers -- if NC is like GA, whatever party you vote for in a primary is the party you have to vote for in the general! I tried to be clever a few years back and voted to get the terrible Republican on the ballot, and then was not allowed to vote against him in the general. In other words, don't be telling people to register for one party in order to vote against that party later -- it might blow up on you!

We thought this sounded unlikely, because for one thing how would they even know who you were voting for in the general election? And so we did a little (very little) looking into Georgia's election law, and found a little explainer on the subject. Turns out that psychobroad is wrong, but not as wrong as we would have thought -- more explainering after the jump!

Here's the dealio: since Georgia has an open primary, you don't have to declare your party affiliation when you register to vote. But when you vote in a primary, you do have to declare a party, and if there's a run-off for that primary, you'd only be allowed to vote in the same party's run-off. However, come November and the general election, you can vote for whoever you want to, just like all those "Reagan Democrats" did back in the '80s. We're not sure whether psychobroad misunderstood, or whether whoever told her she was locked into voting Republican in the general election misinformed her or just plain lied, but as best as we can tell, she doesn't need to worry, so Hooray, and also, welcome to the commentariat, psychobroad. We'll also update if by chance (very very little chance) we got this wrong -- please include linkies if you have corrections.

And now, back to our usual source of deleted comments, the Flying Wingnut Battalion. Today's piece on Tommy Vietor, the former White House aide who helped prep Susan Rice's Sunday-show talking points in the week after Benghazi, drew a lot of attention because Mr. Vietor linked to it in his Twitter stream.

As a result, we got a lot of How! Dare! You! from butthurt wingnuts who just want to know when we'll finally recognize that Benghazi is Watergate plus Iran-Contra times the Holocaust. Consider this note from "GetItRight3240," which should help you fill out your Wingnut Bingo card:

I don' care if your a liberal, conserative, or independent, this is a story about 4 dead Amerians and the president and his administration spinning what happened to those 4 Americans into a storyline that would not negatively impact his re-election. The American people were lied to, on purpose, just as they were about keeping your own doctor and healthcare plan and that your healthcare costs would go down $2500 not up $2500. I just can not fathom that as an American (forget your political affliation) that you would not be outraged about the lie. If a republican president did this, liberals would be calling for impeachment!

Egad! 4 dead Amerians, you say? Surely they are the first Amerians to have died in a dangerous posting, as they are the only dead Amerians we have ever heard of! Funny, though, GetItRight3240, so far the most horrifying "cover up" we've heard of is that the administration said that they believed the attack to be related to outrage over the "Innocence of Muslims" video that people across the Arab world were in fact rioting over (and while we know you don't believe anything from the New York Times, their investigation did find that some of the rioters in Benghazi were talking about the video on Sept. 11, 2012.) Frankly, we've already had a Republican President who responded to the terrorist bombing of a Marine base (241 dead Marines) by invading Grenada, so we'd say that the right's obsession with 4 Amerians who died in a dangerous part of the world is disingenuous at best.

Let's see what "FreeRangeEagle" has to add:

Any problems whose roots can be pinned on the Bush a decade ago are recalled with startling clarity. However getting the most transparent administration reveal facts that surround its deliberate attempt to cover-up incompetence or indifference to act in Benghazi for political reasons is met with "what difference does it make".

We like all the details in this comment. "Indifference or incompetence"? We've been over this, repeatedly, but what the hey, let's take a little stroll into the archives -- there weren't any useful counterterrorist assets that could have gotten to Benghazi in time, and while, yes, the whole city could maybe have been blown to pieces by available jets, we try not to bomb the hell out of cities in friendly countries (yes, yes, there are no friendly Arab countries, silly us). As one Department of Defense official put it:

“Let’s say we were able to get an aircraft there. Do you go in and start strafing a populated area without knowing where friend or foe is? ... If you did that, you could kill the very people you are trying to help.”

Oh, excuses and coverup, right? If Obama were tougher, maybe a whole lot more Americans than 4 could have died.

We got more of the same from "joe5pack," who at least has an amusing pseudonym. Joe5pack took issue with our blasphemous suggestion that the talking points have shifted from "Obama killed them by doing nothing" to "Obama lied about the video" to just plain "BENGHAZIBENGHAZIBENGHAZI":

"We have long since given up on figuring out what we’re supposed to be outraged about." It's probably lying about why and how an embassy was sacked by scapegoating a private citizen so they could win an election. That's what upsets me.

We especially like that "scapegoating a private citizen" bit, as if "The Innocence of Muslims' hadn't sparked riots and murders (by crazy fundamentalists who remind us of our own more excitable fellow Americans) in multiple countries. Nahh, it is impossible that the Obama administration was still trying to determine what happened in Benghazi a few days after events on the other side of the world. They must have lied, because they just did, OK? If only Obama had said "terrorist attack" instead of "act of terror," then no one would be complaining, probably. And that's the only reason Mitt Romney lost the election, because in the two months between the attack and the election, we never heard about Benghazi again, not once.

And finally, "krb686" had this comparison/contrast essay on the essential differences between a good leader and a bad leader:

Well, what was Bush's response to 9/11? Search and rescue, and the war on terror. What was the Obama admin's response to Benghazi? Lie, attempt to cover their asses, lie some more, get caught red handed and continue to lie

Actually, there was no one left to rescue. But he did look very resolute with that bullhorn. Mind you, it might have been nice if Bush had been a little more concerned about that briefing telling him that al Qaeda was "determined to strike in the U.S." And the war on terror sure has been a huge success, what with the elimination of terror and the invasion of a country that had fuck-all to do with 9/11. That turned out just great.

Still, at least you can't say that Bush's actions led to 4 deaths, that much is true.