Deleted Comments Of The Day: In Which We Hear From Some Turkeys 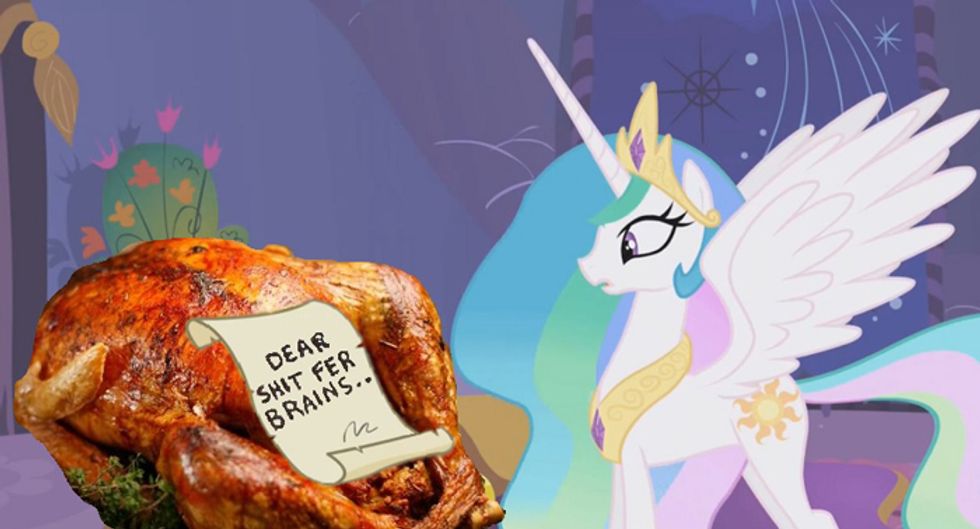 We really were planning to just get a couple of new posts up today and then coast on recipes while getting ready for Thanksgiving, but darned if we didn't notice a couple of high-priority, short-shelf-life messages from idiots in the Comments queue. They simply would not wait until after the weekend, no sir.

Firstly, in reply to our brief piece on pants-filling racist Ted Nugent his trenchant observations on Ferguson, we have this vital observation from "momsaid," whose mom was apparently a racist shithead:

Wow...a voice of reason amidst a sea of insanity! The evidence supports Wilson on every point. If people believe that he made stuff up, they either haven't examined the facts OR they let their own prejudices dictate their conclusions. As for the protesters, does anyone else note the irony of breaking the law to bring attention to someone who was killed while breaking the law?

You can see why we wouldn't want to leave that festering in the comments more than just a few hours, obviously. But there's a person who just called Ted Goddamned Nugent "a voice of reason." We also are briefly renaming our feature "Dear Shit Yer Pants" just for that comment.

Monday night, just an hour after the press conference announcing that Darren Wilson would not be indicted, we got this -- not in reply to that story, but to another story about Ferguson that ran back in August, in which a black writer for Breitbart explained that "Black America's favorite pastime" was "rioting and looting." The decision apparently got "wvmmrh" very excited, prompting them to write,

We don't generally post email addresses, but we're awfully tempted in the case of this contributor whose IP address suggests they're from the Chicago area. Nah, trolling this idiot would be wrong and bad.

Our piece on Don Lemon's asking a woman why she didn't bite Bill Cosby's dick while he was (allegedly) raping her received a very sympathetic reply -- sympathetic to poor Don Lemon, the real victim -- from "tippywippy," who maybe needs to have "Women Should Not Trust Me" tattooed on his forehead:

I don't think Don Lemon was being insensitive with what he said. Let's be real here, if you are 19 and a man rapes you, why would you willingly allow yourself to be in his presence alone for the second time? It's not like she was a adolescent girl being raped or molested by her father, brother, uncle or cousin. This is a man that you don't have to be around if you don't want to and it's OK. You didn't even think about biting his penis when you were performing fellatio because your were so stoned but yet you were sober enough to come up with this brilliant lie stating that you had an STD in order to avoid sexual intercourse? If this were in a court of law i'm pretty sure those same points would've been made. Maybe if the question was asked by a white female rape victim then it would be okay?

Excellent point -- that question would definitely have been allowed in a court of law, possibly up into the mid 1970s, possibly later in jurisdictions presided over by fuckwits.

We had a couple of repeat visits from "CarpeVeritatum," whose pseudonym means "Seize the True Tater." We last heard from this person in response to a piece in which we made fun of Ben Carson's claim that AP History will make kids join ISIS; this time around, Seize The Potatoe was displeased about a couple of things. In reply to our piece about how Republicans are much more committed to diversity than Democrats, Spud Boy just wanted to 'splain a thing or two about history to us. Would you believe that Carpman worked Ben Carson into the conversation?

The Republicans were the party that fought to end slavery, Democrats fought to keep it . Its people like you who seek to just make blanket statements that are so blindly led into believing policies like Jim Crow were okay. Because you don't question the issues or the people themselves based on their individual merit or points or intentions or the whole context of what they are saying . You obviously don't know history because if you did Dr. Ben Carson's words would ring with such truth that you would spend your time promoting his ethical common sense ideas rather than in cynicism. You my friend are precisely what is wrong with this country.

Sorry, you lose points for failing to note that Robert Byrd was once in the KKK.

Needless to say, tater man -- hey, he likes Latin, so let's call him Tuberius Claudius -- was also displeased by our needless off-topic badinage in our piece about how Benny Got Fingered (by God):

This article is so all over the place, goats, bachelors, Airports, Arabic. Your attempt to be a writer criticizing the accomplishments of someone whom you're not even qualified to shine the shoes of. The work of a critic is easy. You risk very little, yet enjoy a position over those who offer up their work and their selves to judgment. People thrive on negative criticism, which is FUN to write and to read! You have done an excellent job offering up nothing positive and demonstrating your sheer jealousy and contempt for a man who has spent his life building, creating, learning history, medicine and spent his time in the service of others. You excellently twist his meanings with such prowess and humor as to make Satan himself jealous. You my friend are a perfect example to anyone reading this garbage that America is in decline and in need of great thought leaders like Ben Carson.

Shame on us! Happily, since we have no desire to shine Mr. Carson's shoes, our worthiness of that job is pretty much beside the point, now isn't it?

And with that, CarpeVeritatum, my friend, you have earned your third strike, and so we must apply the BanHammer of Loving Correction. We bet that's probably offensive to Ben Carson, too.