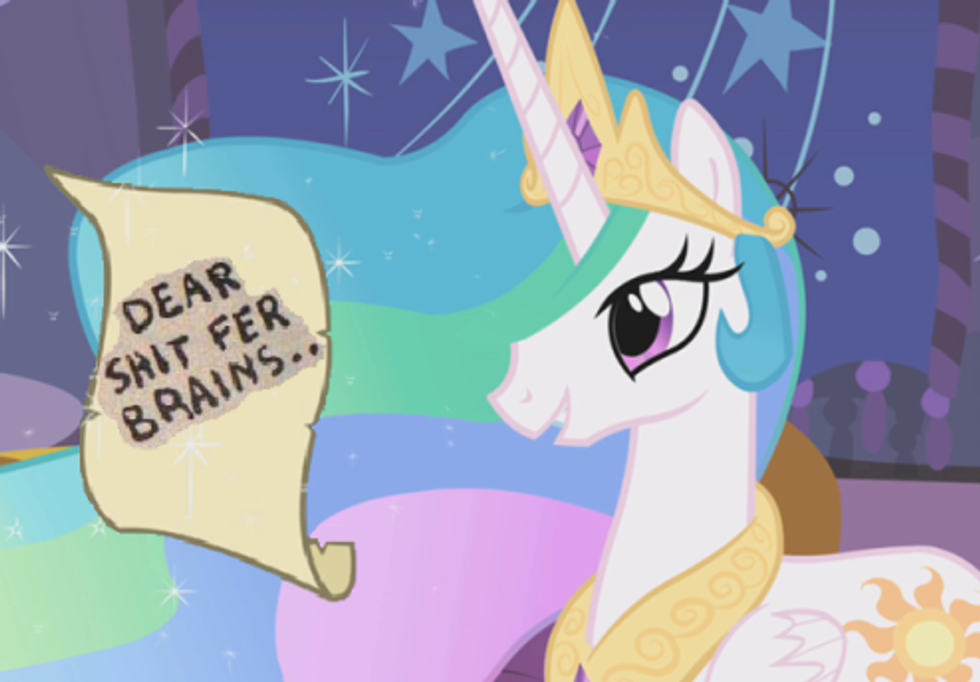 Is it Saturday already? Must be time to put on the old Hazmat suit -- which we never leave the house without now, on account of the 'bola -- and go skim off the worst of the dumbth in the comment queue for you, our dear readers. It's an eclectic grab bag of goo this week, but we see that we moved some folks to political activism!

"Melissa L," for instance,was inspired to get involved by our story about how Illinois Republican candidate for governor Bruce Rauner harrassed a reporter right out of his job for the crime of reporting stuff that wasn't favorable to Rauner. Or maybe all Melissa L read was the headline, "Wow, Bajillionaire Bruce Rauner Is A Real A-Hole," and she thought we were attacking Rauner for being rich:

Thanks, I just donated to Rauner's campaign. I don't care how Rauner spends his own money, I do care the Quinn spends hundreds of millions of taxpayer dollars to try to get votes and give his friends jobs. See latest Federal judge ruling on Quinn and his hires.

Such an on-point critique! Best way to fight graft is to donate twenty bucks to a billionaire, just as long as his vendettas are conducted on his own dime.

We also got a very timely election-week reminder of the existence of one of our favorite wackaloon perennial candidates, Nevada oddity David Lory VanDerBeek, who we profiled in January 2013 after he released a video looking forward to a new civil war, and predicting his own imminent assassination by the tyrant Barack Hussein Obama. Mr. VanDerBeek is still inexplicably alive, and one of his supporters, "hearrean," wrote to set us straight:

What is so wacky about what David Lory has to say? Most of what he speaks we, at least on the right, believe but many are afraid to voice. Actually many on the left believe a lot of what he says which is evident by most of the Dems trying to distance themselves from Obama & their candidacy. And just why are some of us afraid to get too public about our honest opinions? Because we know for example that Obama's gun confiscation is a fact hidden within Obamacare; we know that Obama's Nazi thugs exist & invade the privacy & rights of God-Fearing citizens; we know that the rumors of an Obama police state are no longer rumors & we know that Obama has planned a mass amnesty of illegals, but holding back until after the mid-terms to keep from causing embarrassment to his cronies running for re-election. These are just a few of the reasons we don't feel David Lory is a whack-job, but much the opposite. He is someone who is not afraid of the current government establishment & all of us will, when the chips are down, stand with him!

That darn Obama and his plan to take our guns, which has been right around the corner since 2009. But if David Lory VanDerBeek is such a terrific prophet, why ain't he been droned yet, huh? Maybe Obama is just keeping him alive for his own nefarious purposes, to make conservatives look cray-cray. But yes, Mr. VanDerBeek is still running, and his campaign website is still a storehouse of sensible patriotic thoughts like these:

I can say right now that I am prepared to fight to the death, endure torture, or a life in prison for your freedom and that of my children ... The choice is quite simple. There is only one logical move when you have been backed into a corner. That is to go on a full offensive attack against your enemy, because you have nothing left to lose. If we do nothing, we will lose everything and we have. It is time to take back our lives, our land, our liberty.

He also has a blog, where he explains that cannabis oil cures cancer, but our evil government refuses to see sense on this issue:

WE HAVE THE CURE FOR CANCER AND WE HAVE MADE IT ILLEGAL. What is wrong with our nation? The right to self-medicate is a natural, inalienable right from God.

We can't think of a more appropriate rallying cry for any candidate than David Lory VanDerBeek insisting on the right to self-medicate.

On other current issues, we heard from "virologist1234," who is AN GENUINE VIROLOGIST with a gmail account, on the question of just how afraid we should be of Ebola in America:

i'm as progressive as they come, and I also happen to be a professional virologist. You make the point that people who want mandatory quarantine are perfectly happy to go to work with the flu. But there's a difference between Ebola and the flu, namely the case/fatality ratio for Ebola is FAR HIGHER than for the flu. If you get the flu, chances are you'll recover, but if you get Ebola, you may very well end up dead, and quickly. so tone it back on those of us that favor a 21 day quarantine period for healthcare workers returning from Africa. If they're so intent on providing a humanitarian service to Africans, why do they think it's ok to just drop that when they return to the US? We're people too.

Now, you might think that a professional virologist would know something about the differences between how Ebola and influenza are transmitted, as well as something about the differences between the health care infrastructures of the U.S. and three west African nations, and might also be aware that the professional virologists at the Centers For Disease Control think that a quarantine for people with no symptoms is a bad idea: close monitoring for symptoms, yes, but isolation, not so much. We know that scientists disagree about a lot of stuff, but they (or people pretending to be scientists in comments) should at least try to use real evidence. Still, it's awfully nice to know that there's a professional virologist out there who's willing to say that American lives matter, too, even if not actually endangered. Stupid Africans, getting all the sympathy.

We also had this plea for the free-speech rights of poor oppressed billionaires after we ran a story on Jon Stewart mocking the Koch brothers, who have been buying ads on The Daily Show:

I wonder how Jon Stewart’s skit would have gone in a world where the majority of newspapers and TV networks were more like Fox News rather than MSNBC; if Washington was abolishing many programs and cutting spending drastically and the Koch brothers were liberals who were legally working within the current system to try and elect liberals and get a liberal message out? I wonder who he would demonize in this scenario?

Easy answer! In such a scenario, Jon Stewart would obviously be making fun of all the flying pigs.

For your "not sure if trolling, or just stupid" file, there's this, from "tlctugger," in reply to our story on Keith Ablow and his call for an "American jihad."

I'm trying to move past using sexual words like the F bomb in a derogatory way. Sex is great. Especially foreskin.

Honestly, we're half ready to approve tlctugger, half ready to recommend they seek treatment from Dr. Ablow. Along similar lines, our follow-up story about the Latino Election Fraud that Never Was brought this, from "empresstrudy":

Who actually fucking cares? We need to suspend all election and let Obama rule like a Stalinist God.

Heck, that's pretty much what we say on a regular basis, but is "empresstrudy" One Of Us, or genuinely worried that Obama is a threat? Their comment history at other sites includes some word salad about Obama's weakness on Iran, so we're inclined to think maybe that is some sincere Obama-bashing. But we're not sure. Damned sarcasm, so hard to parse.

Our weekly installment in the "we don't really pay attention to obvious spam, but what?" series: We just like this one because it sounds like spam, but it also sounds like it could have been written by Scrooge McDuck:

And Glenn Beck are fabulous saleman, too.

We got called on our hypocrisy yet again for making fun of Sister Sarah; "KKLINKZ" objected to a recent Sarah Palin Fartknocker report with this pithy sentiment:

And then there's this deeply weird, months-late response to our first story on the shooting of Michael Brown back in August, from "superabound," who somehow managed to find a way to link Michael Brown's death to what he sees as feminist hypocrisy. Yeah, you try to figure it out:

White girls from Jersey get sent home from school for wearing shorts and skirts short enough to show their underage vaginas, the entire Feminist Establishment explodes and all the parents and "allies" join together to protect those poor, poor white girls from having their Constitutional Right to illegal public underage nudity oppressed. A black MALE gets murdered in the street and people think its alright because his pants were "sagging". Funny how when a female's "rights" are being threatened, 99% of the time its just her "right" to walk around looking and acting like a literal prostitute. But when a man's rights are threatened, it usually mean hes about to be straight up murdered or falsely imprisoned.

Dang, feminists sure are a bunch of hypocrites, because they care more about half-nekkid pre-teens in New Jersey who are exposing their vaginas than they do about Michael Brown being shot because he wore low-riding pants, which is apparently what is really at issue in Ferguson. Where exactly does one go to get their Outrage Meter recalibrated?