Deleted Comments Of The Week: In Which We Learn Why Liberals Are Emotional Illogical Liars 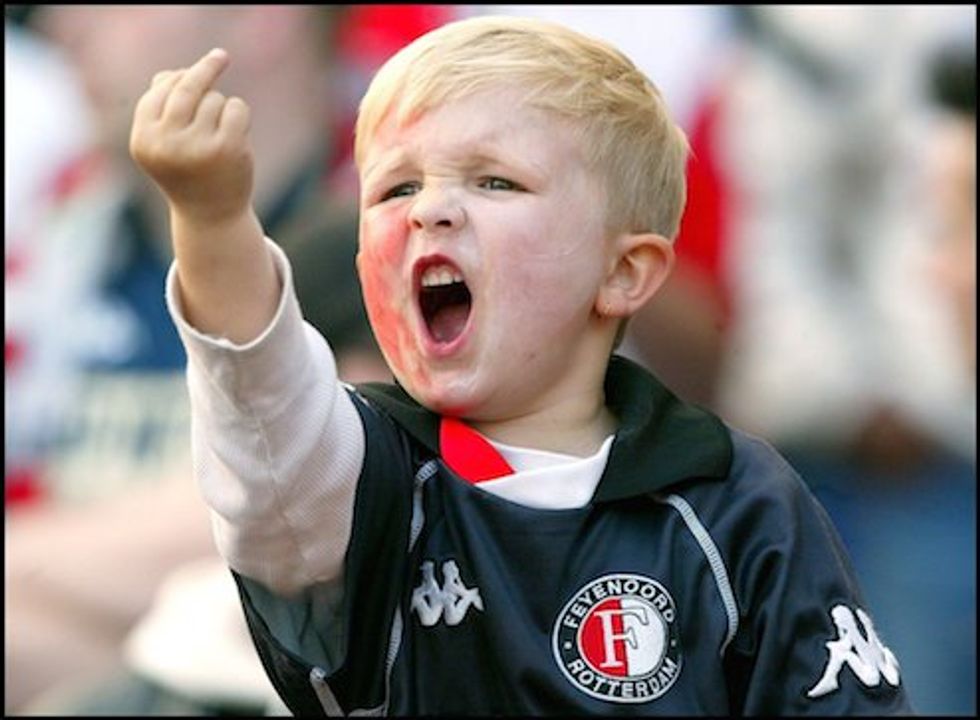 It's time once again to go down into the sub-basement levels of the WonketDome to flush out the comment queue and see what's been clogging up the ones and zeroes. We got a whole bunch of comments in the last few days from people who don't think a whole heck of a lot of our little wonkosite here; our first example is from "SJG613," who was displeased with Yr Editrix's shameful attack on poor Ben Shapiro's precious freedom to discriminate against The Gays:

This is all the liberals do. Conservatives argue facts. Liberals argue insults and made-up stats and will string together any combination of words that will support their position not supported by facts. None of you offer any intelligent response to his POINTS.

This, by the way, was in reply to a post in which l'Editrice responded quite factually to Shapiro's claim that since his right to practice his religion doesn't come from government, then the government cannot encroach on his religious practice. She noted that the Supreme Court held pretty conclusively that states can say, sorry Native Americans, you don't have any right to any rite using peyote -- at least as long as peyote is banned for everyone. Sounds like facts to us, but Yr Doktor Zoom is so liberal he can barely put words together.

Worst of all, you think you're all so clever and funny. It's all hatred...and you've even figured out how to use the Corbomite device, take all your crimes and blame them on your opponents. You say conservatives hate women? Half of all the babies you kill through abortion are women. You say we are INTOLERANT of people who live alternate lifestyles? You are intolerant of anyone living conventional lifestyles. You want to be gay? Heteros don't impose heterosexualism on gays. None of you have anything real to say. Just your sarcasm and insults.

We are going to just have to overlook the idiocy of the combination of words suggesting that we commie libunatics somehow impose homosexuality on anyone, because there is a far more glaring issue here: This doofus has no idea what the Corbomite Devicewas -- it's a pretty terrible metaphor to use as a way of saying "No, you're the real bigot." Sorry, SJG613, you have failed the Kobayashi Maru simulation. And since when were rightwingers Trekkies? The Federation's about as socialist a place as you could find.

SJG613 had one additional comment; in a comment thread where absolutely nobody was talking about Israel, SJG613 added this:

Nothing you said makes any sense. Like Ben said...all your pompous liberal weenies who complain about Israel are hypocritical to the hundreds of countries committing atrocities, in public, out in the open, claiming responsibility, every day. Don't tell me you ran out of hot air for THOSE people.

Wait a minute, this twit's on a first-name basis with Ben Shapiro?

Our story about Georgia Gov. Nathan Deal's proposal to reduce healthcare costs by repealing the law requiring that ERs treat people regardless of their ability to pay drew this careful analysis from "libsareblind," whose email is also "wakeuplibs"@redacted.com. We think maybe they don't like liberals. Libsareblind has some facts and logic to throw at us about this important issue, mostly boiling down to "The Poor Are Lazy Jerks":

Please liberals, quit lying, quit telling half truths, quit changing the story and try to have an intelligent debate. Interpreting this as "Conservatives don't want poor people to go to the ER. They just want them to die!!" That is incredibly stupid and unintelligent of you. If that's how you read it AND you believe that, it's impossible to debate intelligently with you. The article said that they don't want it to be a first line stop for non-emergency issues. If you bleeding heart liberals would want to get to truth, you would find it. I know a couple of local ER doctors and they have said that over the last few decades, the ER has been abused by wefare patients who come in with stubbed toes and sniffly noses amazingly just after 5:00 when the family practice doctor closes. They are too lazy to wait in a waiting room like the rest of us to see the doctor at his office. Over 50% of ER visits are non-emergency visits by people who can't pay. Why? Because they don't care since they don't have to pay either way and usually they don't have to wait at the ER. Wake up libs!!! You greatly underestimate how lazy and unmotivated SOME poor people are. NOT ALL poor people, but some poor people. I know "poor" people who work jobs they don't like and go to the family practice doctor and not the ER because they know it's the right thing to do for everybody. I want to help them. I don't want to help the low-income who purposefully abuse the system and don't even care. This is the land of opportunity and some people would rather just not take advantage of it. Wake up libs!! You are ruining our country by telling lies about thoughtful, caring conservatives.

Yep, there's a thoughtful, caring conservative -- once you prove you've met their moral test and can prove that you're not a lazygreedymoocher, of course, they care.

Somebody in the comments must have mentioned unemployment -- we didn't see it -- because that brought forth this second torrent from libsareblind. Look upon his logic and be dazzled!

Your last comment proves that you can't be reasoned with. You complain about unemployment?!?!? Yet, your libtards continue to let illegal immigrants come in unabated, thus taking jobs from our citizens who could have them. You say, those jobs don't pay enough, blah blah!! They would if you wouldn't let illegal immigrants come in who drive the wage down to those low levels. It's your fault people are poor and you're too stupid to know it. We had living wages here until your hero Teddy Kennedy wanted "immigration reform" Our immigration system is not broken our enforcement is. By now, you're thinking, this f....'in conservative on here. Well, I married a woman from Mexico (was living in Mexico) and brought her here the legal way and paying the fees and filling out the paperwork properly. You liberals don't want to follow the law. You want to be lawless when it's convenient for you thus destroying our country. You are also vile and inconsiderate of living a civil life. You think people abusing our assistance system is ok?? You think voter fraud is ok?? If you did your research you would also find out that over 75% of gun violence is perpetrated by registered Democrats, not Republicans or conservatives. Also, you rich liberals should give all your money away to poor people. Talk the talk. Start a business and hire only poor, uneducated people. Give them a chance. Take them out of poverty by giving them a good paying job. You won't because you don't want them to ruin YOUR company. Hypocrites!!

Yes, we pretty much covered everything there -- started with "illegal aliens cause unemployment" and ended up at "liberals are gun-wielding killers who won't hire anyone at a decent wage!" Also, we will go out on a little statistical limb and bet that the vast majority of gun violence is committed by criminals who don't register to vote at all. But we haven't researched that.

One last comment on the Nathan Deal piece, which featured a favorite photo from the interwebs, a little kid screaming and flipping the finger. Reader "PoorWhyteTrash" apparently thought that we were suggesting that the rude child was Nathan Deal or a Georgia Republican or something, when in fact we simply like to encourage small children to make obscene gestures. Like our other correspondents, PoorWhyteTrash also wanted to lay some history facts on us:

Why is there a little blond haired blue eyed European Footballer Nazi at the top of this page? Because it fucking Leftist propaganda! That's why! No one wants poor people (like me) to die. There just has to be a better way to do all this than bankrupting every state and our nation. With the exception of Arkansas Governor W.Rockefeller (1967-71) all the southern states have been run by Liberal Democrats until recently (1990s to present). And under these governors, WE, Southerners are the poorest states, the most bigoted people, the worst civil rights record.... Yet we blame Conservatives for our plight.

Yep, Orval Faubus and George Wallace, those liberals. The '60s never happened, "Democrat" has always equaled "liberal," LBJ never signed the Civil Rights Act, and there was no Southern Strategy. Sounds about right to us. On the up side, we never noticed the insignia on the little bird-flipper's jacket before, so thanks for that -- we were more familiar with the version that has a Red Sox logo photoshopped in. We always learn so much from our readers!