Deleted Comments: So This Is Where The Truly Depraved Hang Out 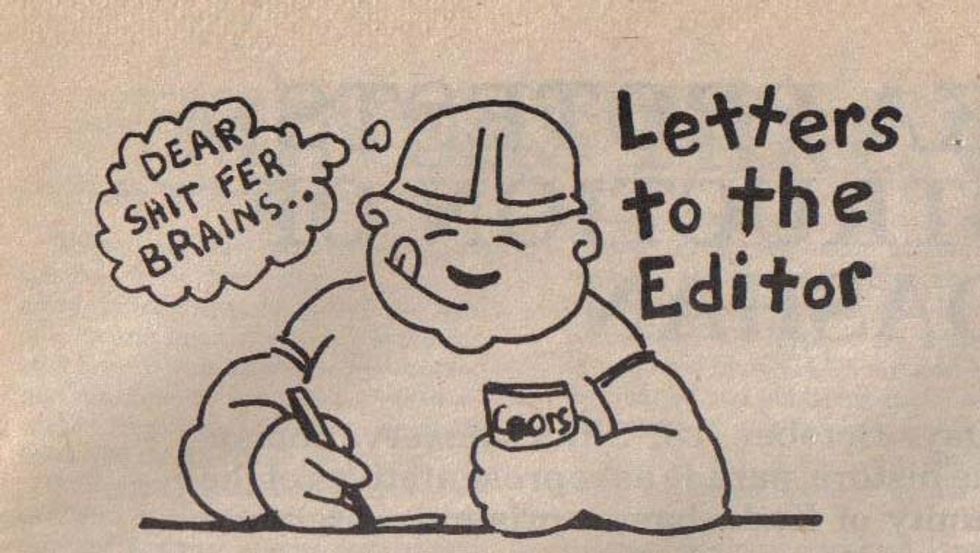 Happy Sunday, Wonkers! Yr Dear ShitFerBrains enjoyed having Thanksgiving Weekend off, with the only downside (if it is one) being that it looks like a lot of the first-string ShitFerBrainers also spent the week flat on their asses in a tryptophan-induced stupor, leaving us with, appropriately enough, a bunch of leftovers. Except we wouldn't recommend making sandwiches or anything else with 'em. Still, we have just enough derp to scrape together and slap into a column. Don't be too surprised if it smells a little off. Then again, it always does.

(EDITRIX'S NOTE: SEE THE END FOR A BONUS SHITFERBRAINS FROM MY FACESPACE PAGE!)

Trump Could Do Worse Than Secretary Of Defense James Mattis. In Fact, It's Shocking He Didn't

Donald Trump seems to have almost accidentally found a competent candidate for Secretary of Defense. Maybe.

Our first missive is from one "Cris Cassity," who definitely didn't care for our profile of Gen. James Mattis, Donald Trump's nominee for Defense Secretary. We aren't entirely sure what upset Cris, particularly since we said rather nice things about Gen. Mattis:

So this is where the truly depraved hang out. The no nothing's who are full of advice,among other things.

It's nowhere as fun as "ugly vile little snark mob" or even the guy who called us a bunch of "denginerates," but who are we to turn down a compliment? Also, it might make a nice mug or tee-shirt design: Where The Truly Depraved Hang Out, with some Sendak-esque Depraved Things having a wild rumpus. We also thought "no nothing's" had a certain poetry to it, considering it managed to cram ignorance of where the actual term came from (if anyone would have loved the anti-immigrant Know Nothing party, it's Trump) plus a misspelling and an unnecessary apostrophe into just two word's. Definitely a candidate for the Ankh-Morpork Guild of Greengrocer's.

Another person of few words was "david rieck," who offered this remarkably nonspecific comment on last week's corporate news roundup:

yall are a bunch of dicks, okay.

The article was about two different moments of corporate greatness: McDonalds' plans to offer table service in some restaurants, and Donald Trump's taking credit for "saving" a Ford factory in Tennessee that wasn't closing in the first place. We do wish Mr. rieck had been more specific about what he considered inaccurate about the stories, though. How are we supposed to improve with such vague critiques?

Also, a rare treat this week: an actual email from a disgruntled reader to our Evan Hurst, from someone who was really upset about something. What, exactly, we can't say: it arrived Wednesday, but seems to reference some kind of debate, even though Evan didn't write about any debates this week. Your guess is as good as ours, but in the interest of frank, open discussion of... something, here's the anonymous sender's critique:

Hey you Hillary ass licker...what up? You fkn f u generation millenial piece of garbage...what debate did you watch you moron..she got jackhammered on every topic.like that stupid smile smurk of joker hillary... Priceless...now go livein Cuba you re re!!! Left liberal moronic media

Fox News Had To Remind Trump Camp Not To Get Megyn Kelly Murdered. For Real.

Welcome to your new America.

At least "Bloody Macbeth" had something specific to say about our piece on Megyn Kelly's revelation that after she criticized Donald Trump's sexism, she received so many death threats that a Fox News executive had to call the Trump campaign to tone down its own rhetoric, like the Trump lawyer who retweeted a message saying "let’s gut her," since egging on the murder of a journalist might not reflect well on the candidate. Pish-tosh, said "Bloody Macbeth":

8 glorious years of Trump! Suck it up PC Liberal SJW fuckards! Nobody cares about Megyn Kelly enough to kill her, for real. This is all just publicity for the rotten cunts book. Wake up sheeple. Baaaaaa

So that's reassuring, we guess. A few commenters noted that a second Trump term isn't actually guaranteed, for what that's worth. For a Shakespeare fan, "Bloody Macbeth" doesn't seem to be a particularly accomplished wordsmith, but that's OK -- have you ever noticed how full of clichés Shakespeare is, anyway? In response to some other commenter, our fan of the Bard offered this witticism: "Run immigrant, run." He seems nice! Also, like many of our ShitFerBrainers, "Bloody Macbeth" has quite an interesting comment history, about equally divided between screaming political comments -- about feminazis, SJWs, and the fact that "nobody likes Jews" -- and griping about comic books and the movies made from them.

A new problem to worry about: Trump-inspired restaurant vigilantes.

While discussing that black veteran who was denied a free Veterans Day meal at a Texas Chili's, one "David Mark" -- who's clearly no Washington Irving -- was quite upset that many commenters use pseudonyms on Wonkette, which somehow led him into a rant about Common Core. Logically enough:

My favorite part is none of you used your real name , How come ? you weren't taught how to spell your name in school? . Maybe after Trump gets rid of common core , sends curriculum back to the States and gives out education vouchers to the students so they can go to the school of their choice , they will be able to come to you and say " President Trump is my favorite President ever , he helped me get a education so I can support you lazy POS's that sit around all day pretending to be smart !!!!

Yes, after Donald Trump reforms American education, we can all look forward to writing as well as that. Also , To eccentric punctuation ! .

Bernie Would Have Won! Hillary Is A Criminal! Wonkette's A Shill, And DNC Cheated!

It's like that movie where there are no laws for just one night, whatever that was called. Oh right, 'The Purge.'

And finally, in reply to our get-all-your-anger-out post-election thread, "Bucket List" offered this astute analysis of the popular versus the electoral vote:

HilLIARy lost. Don't say that you won when you didn't. 3 million illegal alien votes don't count for anything. Neither do the dead democrat votes. Neither do the 60,000 pardoned felons in Virginia. HilLIARy didn't even win the legitimate popular vote.

Us high information voters have much more information to go on than you do; generally don't share it to save time and space, and play the odds better than you low information voters. Speculate all that you want about pardoned felons. Higher numbers of criminals identify with the criminal party - the DNC.

We pointed out to "Bucket List" that they were clearly in the wrong thread, as it was for internecine warfare only, but that we genuinely appreciated his witty wordplay -- "HiLIARy"! Also, we have to confess we're in awe of such a high-information voter, who is well-informed that over 3 million illegal aliens voted, thus providing yet another concrete example of the Dunning-Kruger effect.

Hi all, me here, adding on with this fun sad crazy lady, from Australia, we guess! The background: I had seen a really terrible Facebook post from a Facebook friend I'd never actually met, but who is a blogger for a liberal American website. It was going on and on about Barron Trump, and whether he is autistic; in there somewhere was a suggestion that Melania's "past" had done a number on her eggs, causing her child to perhaps be on the spectrum.

I did not find this to be a topic "liberals" should take glee in. In fact, I was super fucking upset about it all day. I posted about it:

Rebecca Schoenkopf: theres a guy i unfriended today bragging about how his anti-trump stuff is going viral. in the same post he speculated that if barron trump is autistic, its because melania fucked up her eggs with her sluttiness.

god save us all.

I quickly made a new friend, "Cathrin"!

Cathrin: What a Vile Person you are. Melania Trump is a Mother the same as you are. Barron Trump is a young innocent Child. How would you feel if People were verbally cruel to your little girl - publicly. Treat others as you would want to be treated yourself or in other words, if you cannot say something nice about someone, better to say nothing at all.

I asked Cathrin if she could read:

Rebecca Schoenkopf: can you read? i was complaining about someonwe *else* writing that, not me.

Cathrin: Then I apologise. This is what happens when you are guilty of talking in such a foul mouthed way. People stop noticing you properly. At least you have proved you do have compassion within you. Why not nurture your compassionate side and become a nicer, kinder person. Wanting to fight, as you say and trying to encourage other People to fight, is not the way to live.

And with that, she was all over every post on my (personal) Facebook page, explaining that I need an exorcism and also the Roman Catholic Clergy. Here, for instance, was a post about these "HELL. NO." baseball caps you can buy! (They are going very fast! We are having to order more!)

Cathrin: Why are you not openly saying you are a Satanist or that you have been captured by Satan and now spread Satan's foul evil ways with your foul mouthed language. What a disgrace you are to Humanity overtaken by Evil spirits and without a life of your own. You need to think hard about when you first began to behave in such a despicable way. That was the Day Satan entered you. Only Exorcism can help you now. If you do want to recover, then only Roman Catholic Clergy can help you.

My lovely sister wanted one! A hat, not an exorcism:

Sarah Schoenkopf Ekedal: I'm hoping this is in my Christmas package

Cathrin: Why do you Celebrate Christmas if you are not a Christian? Christmas is a Celebration of The Birth Of Jesus. December the 25th is Christ's Birth Day [intentionally spelt]. CHRIST-mas is Our Celebration, not yours!!!!!

My sister, who actually goes to Jesus Church, is a better woman than I:

And this woman Audrey is too:

Audrey Joyce: Are you gonna buy a hat or not?

Cathrin is probably not going to buy a hat. They are ALL FOR YOU.