Deleted Comments: Why Is Wonkette So Full Of Stanky Vaginas? WHY? 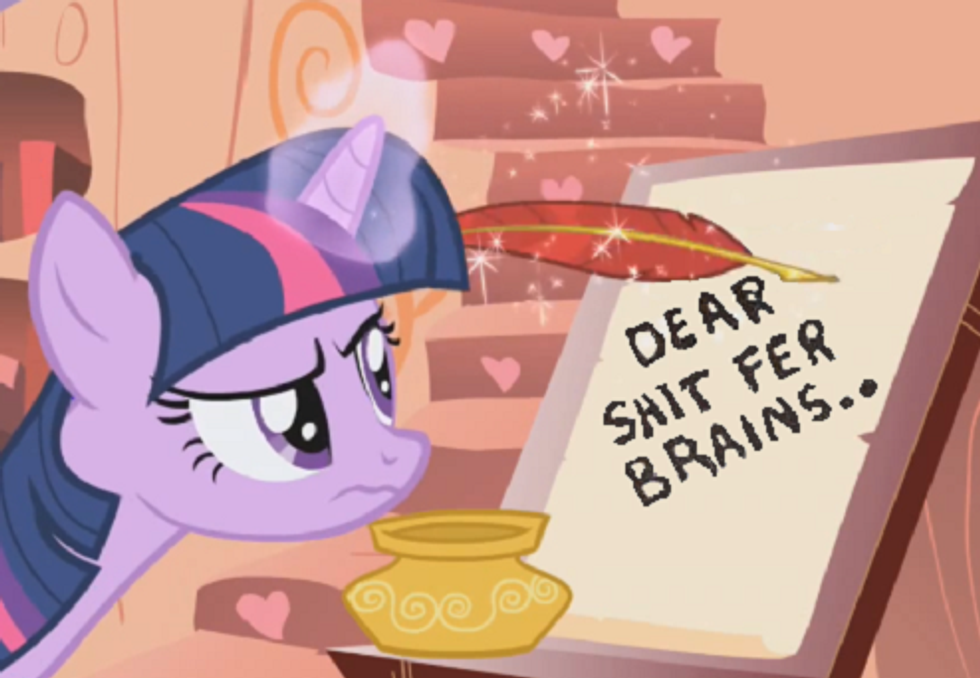 Why are you weirdos always writing about vaginas anyway?

Time for another foray into the Deleted Comments bin, and this week we'll get right to the point with this puissant analysis of what's wrong with Wonkette, from one "Trump4theWin," whose username suggests they enjoy a good game of whist. Trump4theWin wanted us to know exactly why we suck, or at least why our recent piece on Donald Trump campaign manager Corey Lewandowski's arrest did:

Wonkette emits another slanderous slew of stank and drama, because they are vaginas.

That's actually pretty good alliteration; not quite up to the standards of what William Safire wrote for Spiro Agnew (WE ARE OLD!), but not terrible. Also, what's wrong with vaginas, you twat?

Trump4theWin also had thoughts -- in reply to a story on something else entirely -- on why the 2008 mortgage crisis happened: it was because Washington Politicians forced the banks to make bad loans to The Blacks -- never mind all the speculation and tranches and financial games involved in mortgage reselling that really led to the catastrophe. Mostly, it was affirmative action what did it:

I am the last one to defend banks but this was forced on them over a multi decade effort at all levels of the media and government that continually accused them of racism for not lending to blacks until the standards were relaxed so far even a part time job could get a house loan. Of course big government proponents had no worries because they set up the Big Bad Federal Reserve to bail the banks out with taxpayer money to save them from being ruined by a run on the banks if it is ever discovered they are practicing fraud and lending money they don't actually have. The biggest rip off and transfer of wealth from the bottom to the top in history and only 'right wing nuts' like me are interested in seeing whats in the secret books and dealings at this private bank that our leaders sold us into debt slavery to.

And yes, he also mourned the loss of Antonin Scalia, since now unions will run rampant:

Without Scalia there to block the Unions, Democrats can keep screwing inner city youths by not giving them any choice or ability to rise out of the government plantation

And of course, when somebody pointed out that those comments were just the teensiest bit racist, Trump4theWin was astonished at our racism:

So now informing the naive about the history surrounding lending standards is racist! Of course! Everything else is, why not this too!

Trump4theWin even managed to defend the sovereign citizen idiot in Florida who insisted that he was David Hall the individual but definitely not "David Hall" the "person," who is only a legal figment on paper. Our Trumpkin found that all in all, the sovereign citizen was a lot smarter than the dumb old judge, who couldn't seem to keep his wingnut nomenclature straight:

Notice the Judge himself said the charges were for the individual David Hall but not the person. I think this Judge has his law backwards....

Damn, too bad David Hall couldn't get Trump4theWin to appear in court to help him out.

We also heard from another Trump supporter who went simply by "dean" (we're guessing that's a first name and not a job title), who didn't care one single bit for our stories about those loser reporters who actually expected Donald Trump to answer their questions. We'll give him credit: at least he read the little author description.

gosh what a bunch of a**holes. You do realize you're a**holes right. How's that for PhD rhetoric Dr?

Apparently "dean" magically seized control of our Disqus account too, because he followed that insight a little later with this claim that he'd deleted a whole bunch of replies to his brilliant comment. No, that is not possible, actually. But we do appreciate dean's use of strategically placed asterisks to evade the censorship of our language filter (which in our case we have not got):

dear friends I accidentally deleted all your a**hole replies without reading, could you please send them again thank you. Nice job Dr, your website with hot naked chicks and F*** Trump T shirts is a class act, attracts the kind of poster whose opinion I can learn from, and you sell advertising! Does anybody know if they sell computer disinfectant. Last time I let google news drag me into the gutter (ok it was fun)

"Dean" is reportedly in negotiations with Fox News for a position as a satirist.

In other Trump fan news, one "PooPooMcGee" wasted a perfectly good username replying last week to a piece about Trump from 2011 about how Donald Trump considers himself "the least racist person there is." The fact that we would even deign to take issue with that statement (five years ago) proves that we have the worst writers in the world, because we simply don't recognize the hyper-bowl:

What kind of shit piece is this? Most people know that Trump over exaggerates. It takes a borderline mentally challenged person to take a comment like that 100% literally. He was making a point. Here's an example for your small brain: "My mom makes the best meatballs ever." If Trump said that, you and your brain dead style of writing, which panders to individuals with pathetically low intelligence, would say something along the lines of "So Trump's mother makes better meatballs than Gordon Ramsay? Better meatballs than award winning italian chef Gusto Fuckanatti?" Please, think about a new career that does not include writing and using your (lack of) brain. Articles like this are living examples of why I hate the media.

Guess he told us. Jack Stuef, you are so fired!

Our far more recent (as in last week) piece on Florida Gov. Rick Scott's latest healthcare douchebaggery, defunding Medicaid services at Planned Parenthood, drew this comment from one "Marty Johnson," who wishes women would just pull their cervixes up by their own bootstraps:

Here is a tip little man: Nothing stopping YOU from paying for other peoples' medical treatment. Knock yourself out.

Never mind that the story wasn't really about cuts or increases to the Medicaid budget; it was about where the payments were going. In any case, Johnson made it abundantly clear that liberals are a bunch of hypocrites since they want to raise taxes for social services instead of putting only their own money on the line. You don't really need to see the comments he was replying to, all of which had some delusional thinking about "social contracts" and stuff:

Strangely, we're fairly sure he wouldn't advocate that people in favor of a stronger military should make individual donations to Northrop-Grumman. Also, we might as well remind him of this excellent 2012 essay by Stephen King explaining why taxation is a good thing, and why the "Why don't you just write a check?" ploy is such a shitty argument. Let's close today with a few lines from the eminently quotable Mr. King:

I’ve known rich people, and why not, since I’m one of them? The majority would rather douse their dicks with lighter fluid, strike a match, and dance around singing “Disco Inferno” than pay one more cent in taxes to Uncle Sugar. It’s true that some rich folks put at least some of their tax savings into charitable contributions. My wife and I give away roughly $4 million a year to libraries, local fire departments that need updated lifesaving equipment (Jaws of Life tools are always a popular request), schools, and a scattering of organizations that underwrite the arts. Warren Buffett does the same; so does Bill Gates; so does Steven Spielberg; so do the Koch brothers; so did the late Steve Jobs. All fine as far as it goes, but it doesn’t go far enough.

What charitable 1 percenters can’t do is assume responsibility -- America’s national responsibilities: the care of its sick and its poor, the education of its young, the repair of its failing infrastructure, the repayment of its staggering war debts. Charity from the rich can’t fix global warming or lower the price of gasoline by one single red penny. That kind of salvation does not come from Mark Zuckerberg or Steve Ballmer saying, “OK, I’ll write a $2 million bonus check to the IRS.” That annoying responsibility stuff comes from three words that are anathema to the Tea Partiers: United American citizenry.

And that, ladies and gents, is what real patriotism looks like. Gotta like a man who says most rich people are "as boring as old, dead dog shit." Go read the whole thing again, like we told you to back in 2012. We'll be here when you get back.