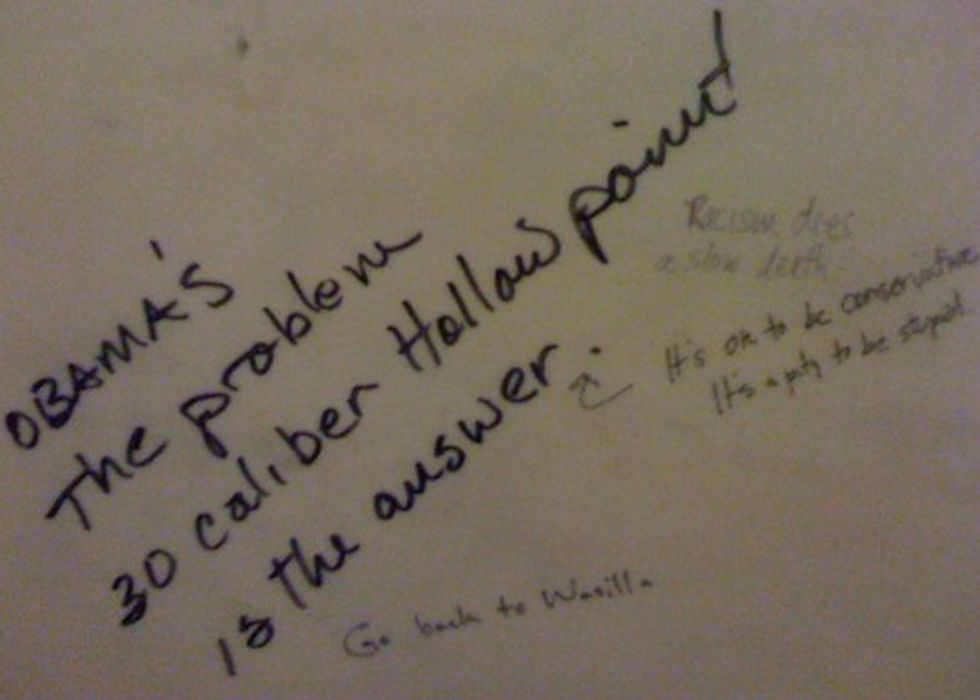 Our men's room correspondent in Anchorage sent this wonderful picture of the bathroom wall at Ted Stevens International Airport. We guess this is what they call "publicly funded art" in Alaska, as everyone up there gets those "oil welfare" checks.

But what does it say? Here is the transcription of the main message, followed by the replies from the liberal peanut gallery:

It's okay to be conservative.

It's a pity to be stupid.

Go back to Wasilla

So, the person who wrote this graffiti in the Anchorage airport thinks Obama is "The problem," and wants to kill the president with what Fox News calls "cop killer" bullets. We guess that is normal for a state that very briefly had a governor who would later put bulls-eyes on pictures of her pretend enemies such as elected lawmakers from another political party.

The first response, "Racism dies a slow death," is less than clear. We can only guess that it's a comment on the racism of the original graffito, even though there's no indication that racism is anywhere close to receding, especially in a state that recently elected a bigot governor who referred to Barack Obama in public as "Sambo" and smiled approvingly when her idiot followers shouted "nigger" whenever Obama was mentioned.

As for the person who thinks it's "okay" for people to want the president to be murdered with "cop killer" bullets -- you know, being "conservative" -- the real problem is neglecting to punctuate the end of the graffiti scrawl with a period. So this free-lance copy editor adds a period to the end of the second sentence, but not the first sentence ("OBAMA'S The problem"), and the random use of upper- and lower-case letters along with the extremely bad spelling/penmanship resulting in "Hollow poiwt" is simply ignored. "Stupid" is relative in Alaska.

The most succinct commentary on the Obama death wish is "Go back to Wasilla." Thanks to Wonkette operative "Bill S." in the AK.