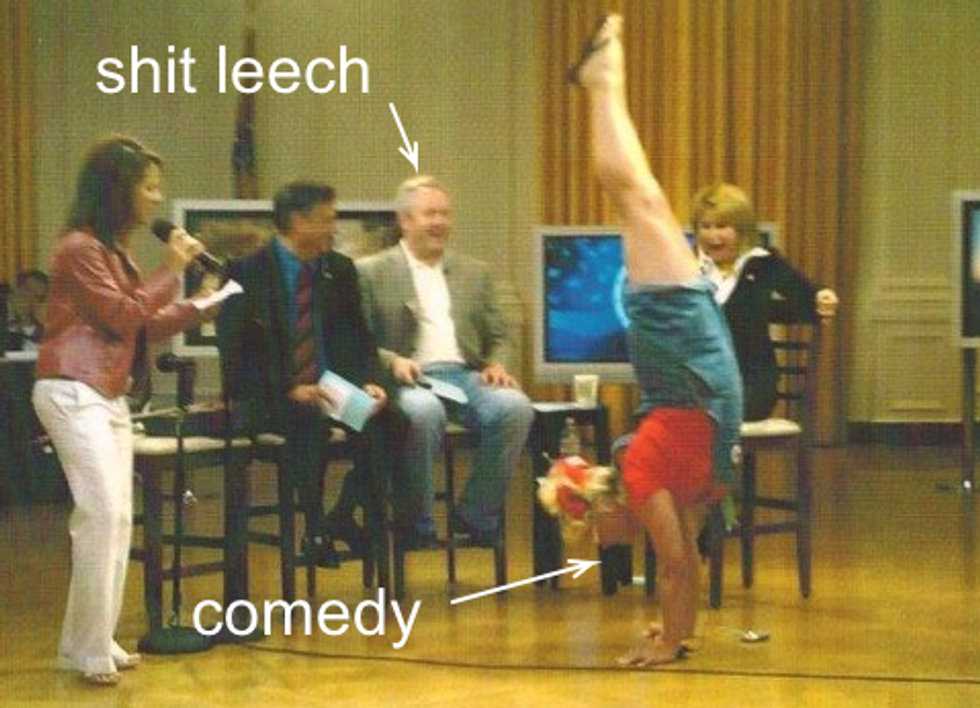 Human poop-leech Andrew Breitbart is probably best known for choosing carefully edited videos of black women who have done nothing wrong, but are actually pretty remarkable citizens, and trying to ruin their lives and the reputation of what is perhaps the most important civil rights group in American history. Unfortunately, the first time he did that, the media finally called him out for what he is, and the black-lady target was vindicated. Sad face. He's still around, though, because he is loud. Which brings us to this delightful WorldNetDaily column by idiot Tea Party celebrity Victoria Jackson. She loves Andrew Breitbart, and they've appeared together many times! Apparently Andrew thinks just the world of Victoria and her handstands, and says she will change "the landscape of Hollywood."

When I first met Andrew in L.A., he told me that history would look back on me and smile, that I would be one of the influences that changed the landscape of Hollywood from 100 percent liberal to at least 50-50 … something to that effect. I puffed up with pride and pictured myself winning my third Oscar, shrugging my shoulders, thanking God and hearing whispers from the front row, "She's the reason I switched to conservative!" "Me, too!" "I just love President Palin!" "I just got born again!" At the Vanity Fair party, Sean Penn sidles up to me and purrs into my ear, "Conservative women are so much sexier," and then Susan Sarandon says, "I always knew you were smart!"

Well, I'm pretty much banned from Hollywood right now, so I don't know exactly when that dream will come true, but …

Just look at the delight on his face! He knows a star when he's seen one. Perhaps she can put on blackface and star as Shirley Sherrod in his next video? That would probably be pretty dangerous, considering it may cause Los Angeles to literally catch on fire from the sheer brilliance of the performance, and would probably end liberalism once and for all.

On the way to my second tea-party speech, in '09, I asked Breitbart if it was philosophically correct if I called the president a communist. "People admit he's a Marxist, and Marx wrote the Communist Manifesto, so what's the difference?" After a long pause, Andrew said, "Victoria, say whatever you want to say." I took that as permission, so I started publicly discussing the state of our union in this simplest way I could, explaining our sudden government takeover and dying middle class.

Very logical, that. Yes, you should always ask Breitbart first for permission, as he has closets full of awards given for his excellent media ethics.

Andrew suddenly asked if I'd be his sidekick on the radio the next morning at 6 a.m. when he filled in for Dennis Miller. I quickly said yes! What an adventure! My house was far away in Acton, so Andrew called his wife, asked her permission and then invited me to stay at his home in the tony Bel Air area.

Andrew continued, "I thought of the title to my book today! I was eating pulled pork and it came to me, 'Righteous IndigNation'! You know, with the Right and the Nation in bold. …" "That's great!" I said, tingling with importance – I was one of the first people to know this.

OMG, Victoria! You were there when socialism was finally killed forever! Good luck with All Black People Are Racist: the Shirley Sherrod Story! [WND]