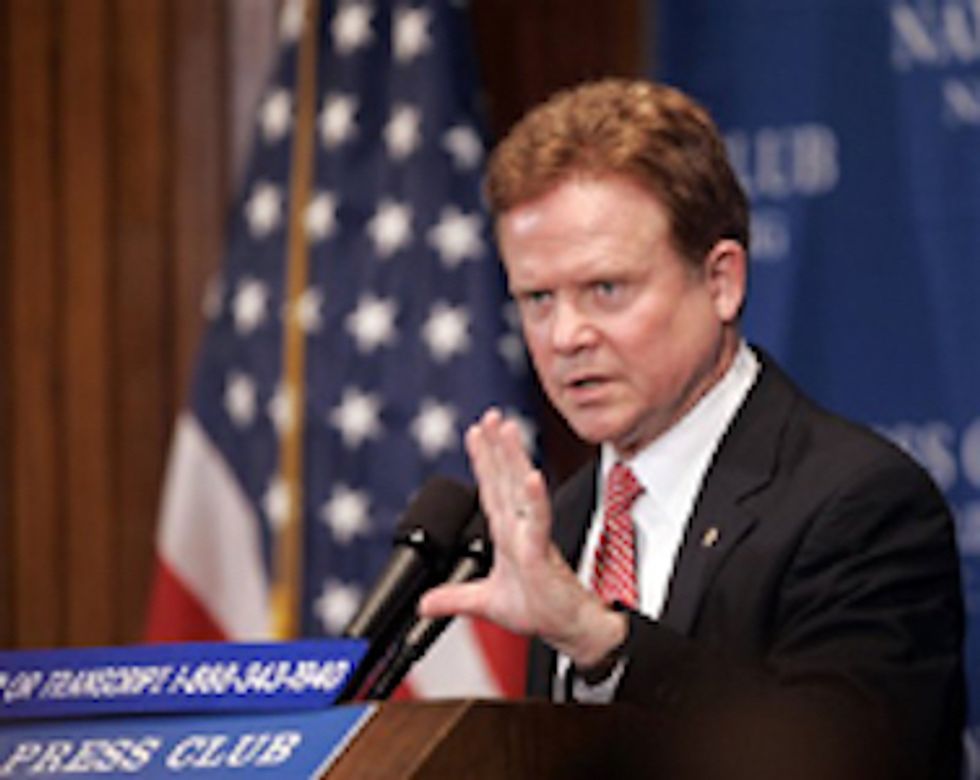 No, YOU shut up

Hey, all you-all, let's all point and laugh at this crybaby loser dick-mold Jim Webb boo-hooing all over himself because he losered the Democratic debate on Tuesday night:

“It was rigged in terms of who was going to get time on the floor,” Mr. Webb, a former senator from Virginia, said during a forum at the Council on Foreign Relations. “It’s very difficult to win a debate if you don’t get the opportunity to speak.” [...]

“The debate was being portrayed as a showdown between Mrs. Clinton and Bernie,” Mr. Webb said on Thursday. “I even turned around to Bernie Sanders at one point and said ‘Bernie, say my name.'”

Yeah, uh, Jim? Can we call you Jim? (It's a lot nicer than the things we usually call you.) We have seen all the whinings and twitterings and petitions across the intertubes about how the debate was somehow rigged because Joe Biden never accepted his invitation to attend, and Hillary Clinton never took a literal dump in the middle of the stage, and Bernie Sanders was not immediately elected on the spot, and something something that guy Lincoln Chafee, what the fuck is he still doing in this race, with all of his no money and no supporters, am we right, Wolf Blitzer? We is right!

But all of that aside, Jim, you really oughtta be grateful there was no kids' table for pretend candidates on Tuesday because where the fuck do you think you would have been sitting, with your Chafee-esque NO MONEY and NO SUPPORTERS? It would not have been in Uncle Bernie's prime time lap, begging him to say your name.

Also, dude, the talk time is not the issue. There are about a thousandyteen and a half reasons why you ain't never gonna be no Democratic president of us, and it's not because Anderson Cooper didn't give you enough time to regale us with your flashbacks from The Nam.

It is because you are kind of a dick, and always have been, and the only reason Democrats don't throw tomatoes in your face is because you helped us kick that walking shit-stain Virginia Sen. George "Macaca" Allen out of office a decade ago, so thanks for that, we guess.

Also, we do not care for your bitching and your moaning about Obamacare, like you are some kind of a Republican.

And as for your deep thoughts earlier this year about the hate-not-heritage Confederate flag?

This is an emotional time and we all need to think through these issues with a care that recognizes the need for change but also respects the complicated history of the Civil War. The Confederate Battle Flag has wrongly been used for racist and other purposes in recent decades. It should not be used in any way as a political symbol that divides us.

But we should also remember that honorable Americans fought on both sides in the Civil War, including slave holders in the Union Army from states such as Missouri, Kentucky, Maryland and Delaware, and that many non-slave holders fought for the South.

Yeah yeah, Lincoln was a Republican, and Dixiecrats, and Robert Byrd, but it is 20-goddamned-15, and we Democrats aren't into that traitor flag bullshit anymore, so you can fuck the fuck off and then fuck yourself some more.

And that, Jim Webb, you dumb cock, is why you are never going to be president.