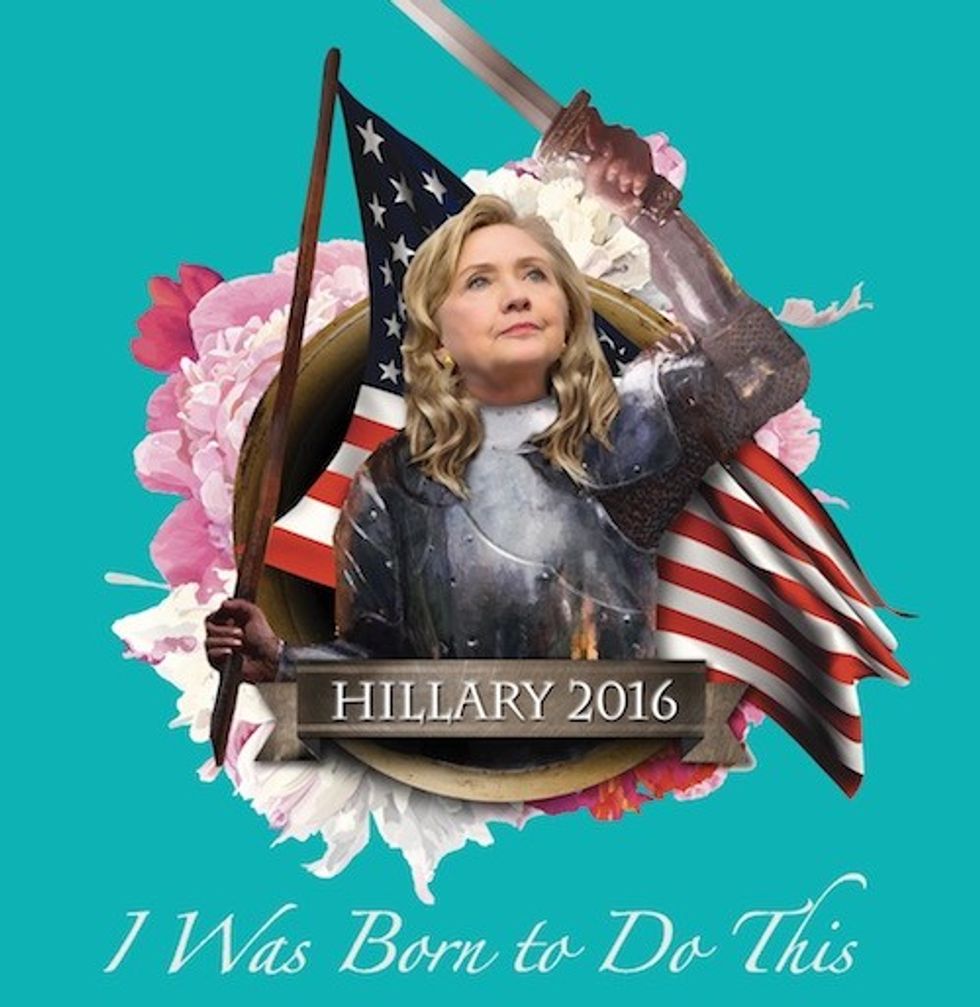 Starring Hillary Clinton, and also some other guys.

We keep forgetting to tell you about this whole other party, the Democrats, who are also doing a primary election thingy-whosit-mabob three-legged potato sack race, to each other, for their party's presidential nomination. It's just that the fucktastrophe that is the Republican primary is so much sexxxier than whatever it is Democrats are debating amongst themselves -- the metric system, maybe?

So here's your quick Democrats Are Running Too update. It is pretty much same as it ever was: Hillary Clinton is still winning nationwide. Yeah, sorry, despite the best efforts of the New York Times, Democrats still like her OK. Plus, now she's going to cry havoc and let slip the dogs of war all over the pharmaceutical industry, for price-gouging grandma, take THAT, Wall Street.

Bernie Sanders? Yup, he is still berning in Iowa and New Hampshire. Also, he berned recently in Virginia, before flying away on a unicorn. Plus, he was The Jew Candidate for a whole day, when he spoke at the Liberty University School College of Bible Humpin'-n-Thumpin', where the evangelical girls and boys nodded and even applauded politely as Bernie talked about REAL family values, like seeing themselves right out of gay buttholes and ladies' vaginas, thanks. (Spoiler: The evangelical girls and boys are not going to vote for the pro-choice socialist Jew. Sorry, kids, but SCIENCE FACT.)

Joe Biden is still handsome, still not a candidate, and still all, "Can't you assholes leave me alone for five motherfucking minutes so I can think this decision while I'm grieving for my son Beau who just died?" (But he's saying it nicer than that, because he is Joe Biden, and he saves his swears for when he's whispering in the president's ear.) Oh, and Reagan fanboy "Democrat" Jim Webb can still fuck himself with a corncob.

Former Maryland Gov. Martin O'Malley is still off whining somewhere, probably, about how he'd totally be winning right now, if only he could have eleventeen trillionty debates with Hillary Clinton. We are bored of that, O'Malley, cut it out.

Now for something new and exciting: Lincoln Chafee is still running too! Who? Come on, guys, we already told you. How come you keep forgetting about Lincoln Chafee? He's that guy from Rhode Island, who used to be a Republican senator, before he became an Independent governor, before he became an unemployed Democrat. Also, he is Very Extremely Concerned about cramming the metric system down our throats, which is the second dumbest campaign platform, after Harvard Professor Larry Lessig's pitch to be president to do this one weird trick and then resign. (He's the other Who The Fuck Is That? Candidate in the Democratic primary. No, you don't need to remember his name.)

So why are we telling you about Lincoln Chafee? Because while we are all taking giant elephant dumps on Dr. Ben Carson's pointy head, for saying that Muslims cannot be president because REASONS, Chafee wants to get in on that action too:

“Regarding Dr Carson’s statement that a Muslim shouldn’t be president, Article II Section 1 of our Constitution clearly states the qualifications for the presidency.” He added: “Dr Carson should discontinue his campaign based on making such an uninformed and discriminatory statement that a Muslim shouldn’t be able to ask American voters to have the freedom to make that decision.”

Chafee's statement is hardly controversial. On Sunday, Sanders said that he is "very disappointed" in Carson for saying such a thing, and on Monday, Hillary Clinton said, "Yeah, what Sanders said, that Carson guy is a dumb asshole." (But you know, diplomatically.) Hell, even some Republican candidates are like, "Yeah, uh ... I don't think you're supposed to say that out loud?" Not Bobby Jindal, though, he's happy to say it out loud because of how he's doing about as well as Lincoln Chafee and sure would like some attention too please.

Chafee, however, is the first candidate to call for Carson to drop out of the race entirely and go sit in the dunce corner, for failing to ever read the Constitution. We appreciate the moxie, even if Chafee is a nobody nothing of a candidate, and you probably already forgot about him again. If he keeps this up, we might have to add him to the Wonkette Primary after all!*

*No, we will never have to do that, because no Democrat is ever in a million years going to start Feeling The Chafe.