Don't try to tell us God doesn't smile on Your Wonkette. Why else would Dentist/Lawyer/Real Estate Agent/Birther (so much threat!) Dr. Orly Taitz Esquire be leading in the GOP primary to take on California Senator Dianne Feinstein? Your Wonkette is no particular fan of ol' (and we mean ol') DiFi, having once been present when the esteemed senator delivered a bitchy little speech about how all those dastardlyteachers and unions were to blame for the state of the schools. Fucking Dianne Feinstein blargh! HOWEVER! More importantly right now, in the race to lose to her, ORLY TAITZ IS LEADING THE PACK!

Explainer us, The Orange County Register:

Taitz is the best known of the candidates, thanks to her numerous suits against Obama, and polls at 19 percent among Republican voters, according to the poll by Los Angeles businessman Al Ramirez. Ramirez places second at 15 percent. Danville autism advocate Elizabeth Emken received the state GOP’s endorsement on Sunday but was tied for last place at 2 percent in the Ramirez poll.

The fact of the matter, though, is that few have heard of most of the candidates – 38 percent responded they didn’t know who they’d vote for if the election were held today. And Ramirez’ Latino surname, the only one on the list, may have helped him.

Oh reporter Martin Wisckol, once again you are hilarious! In a GOP primary Ramirez's Latino surname might have helped him -- you have seen the comments on any story ever on Orange County Register Dot Com, si?

In the meantime, Taitz is teaming up to combat voter fraud with perhaps the only other woman in the known universe who has just about precisely the same claim to sanity as does Taitz: Nevada loser Sharron Angle. She announced it on her Jukt Micronics website, by posting some illiterate sexts between the two. Here, have a look-see: 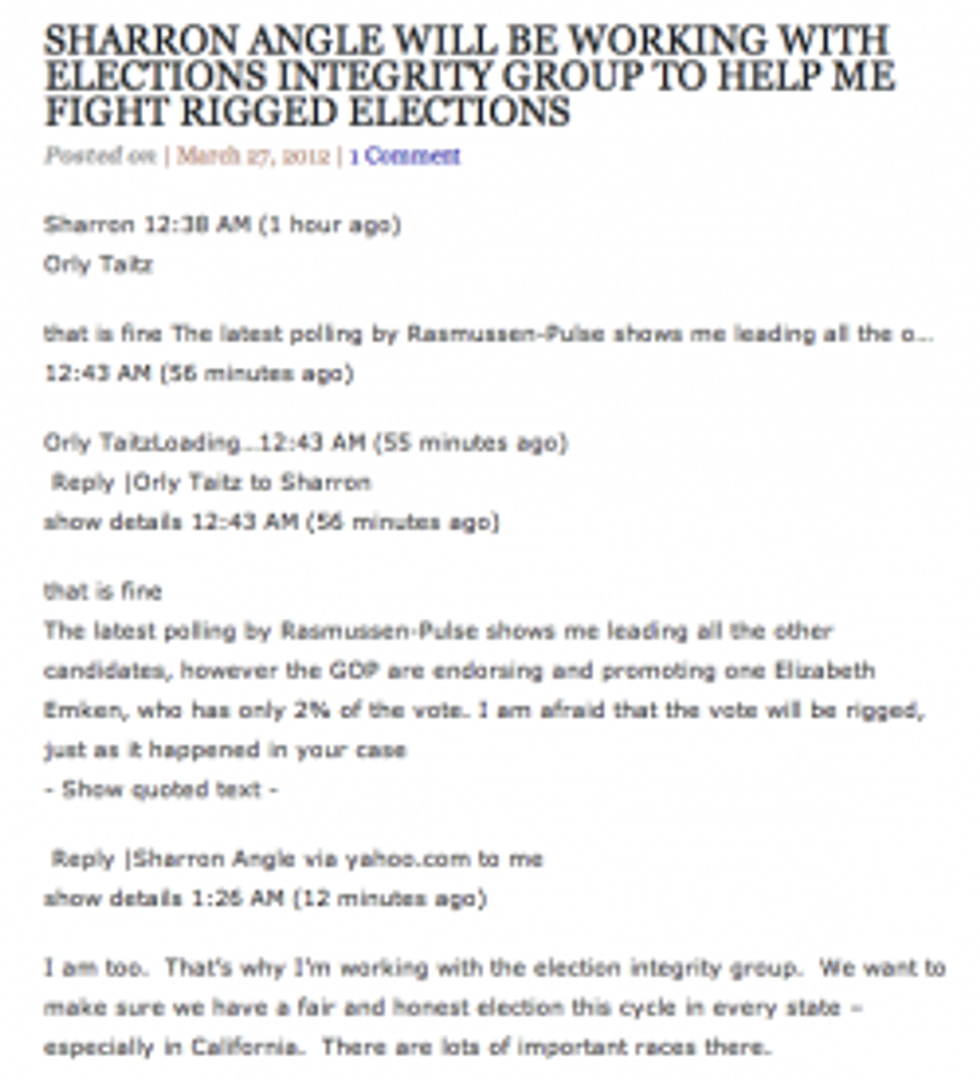 Sit The Hell Down Meghan McCain, And Listen To A Fable

Is Trump Cutting Off Michigan's Nose To Spite Their Governor's Face? Probably!

COVID-19 Not A 'Bioweapon' Manufactured In A Lab, But Try Telling The Conspiracy Theorists That