Derp Roundup: Your Weekly Slog Through The Slushpile 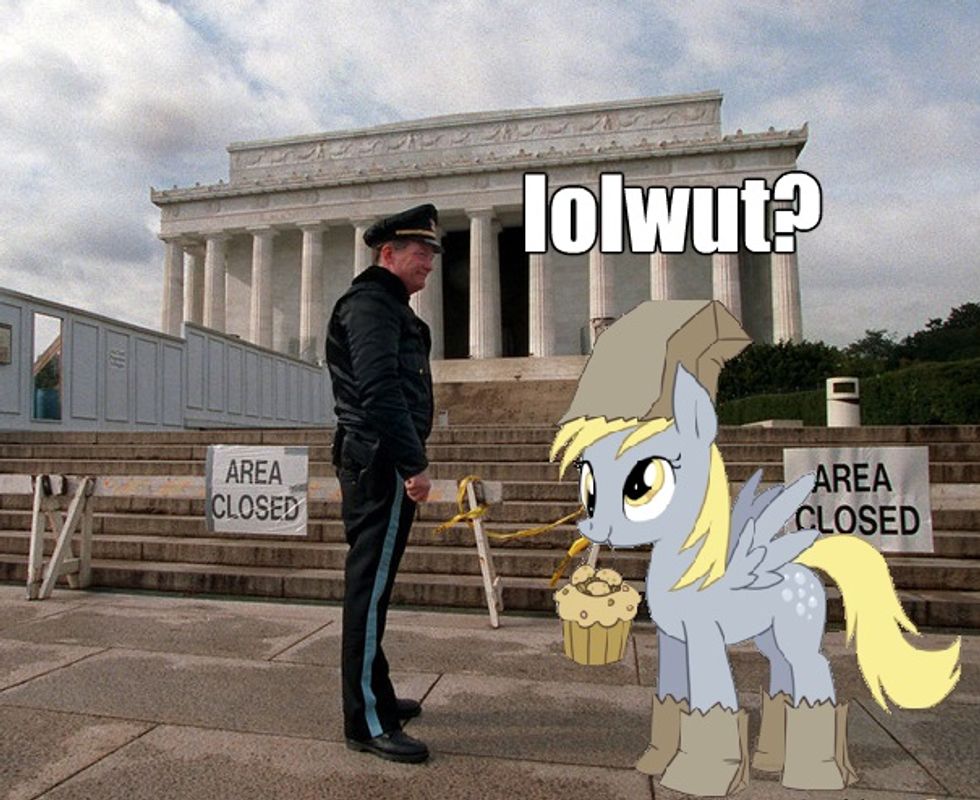 Welcome to a Gummint Shutdown Edition of the Derp Roundup, your weekly accumulation of asinine asshattery from the aether that was too stoopid to ignore completely but that we weren't inclined to waste a full-length post on. To start off, let's do a little bit of mythbusting! We caught Tucker Carlson's Home for Lying Liars in a bit of a lie! On Wednesday, theDaily Caller proclaimed, based on a single photograph apparently, that Washington DC's monuments and memorials were all kept open during the 1995/96 shutdowns:

The administration’s decision to barricade the Lincoln Memorial marks the first time in its history the memorial has been totally off limits to visitors during a shutdown.

As proof, they offer a photo of the interior of the Lincoln Memorial in 1995, showing that the information booth was closed, but tourists were still able to enter the memorial. It took us all of seven minutes,* however, to find this photo from the Denver Post showing a Park Service Police officer standing in front of a completely closed Lincoln Memorial on November 15, 1995. The AP slideshow also includes a photo of the fenced-off National Christmas Tree -- with nary a single Republican congresscritter tearing down the fence while decrying Bill Clinton's War on Christmas. And the Washington Post also has a photo of tourists leaving the Lincoln Memorial as it was being closed down on November 14. So, yeah, Daily Caller -- utterly unprecedented.** At least they didn't argue that Clinton never closed the World War II memorial in 1995-96.***

* Seven minutes of googling, plus another 40 minutes in MS Paint to add Derpy Hooves to the photo...

** For trivia nitpickers, there were two shutdowns in 95-96, November 14-19, and December 16-January 6. The Daily Caller's photo is from December 16, so apparently the Park Service allowed visitors during the second?