Despite Drought, Plenty Of Nuts Available In California Primary: Your Senate Sunday 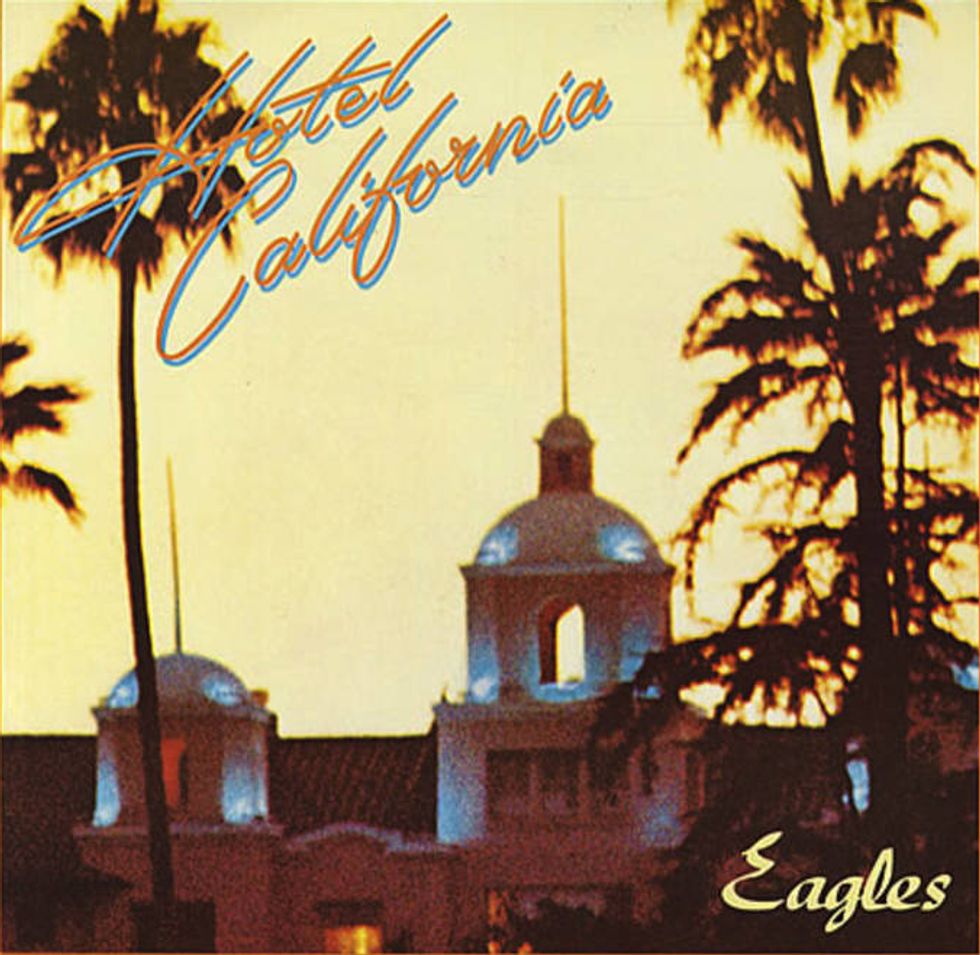 Tuesday is the big ol' California Primary, and it's not merely the almost-but-not-quite final showdown for Bernie and Hillary (BOTH OF WHOM ARE SWELL), it's also the chance for residents of the Golden State to choose among 34 candidates (most of whom are loonies) for the U.S. Senate. For non-presidential races, instead of a "Republican primary" and a "Democratic primary," California has this goofy primary system where everybody is on one ballot regardless of party, and then the top two vote-getters from the primary go on to the general election in November. Thanks to the retirement of Forever Senator Barbara Boxer, the seat is open, so everydamnbody decided to run for it. Through some miracle, Scott Brown did not move to California and declare himself a lifelong resident with long family ties to the state.

While there are a bunch of Republicans running for the Senate this year, all the polling indicates two Democrats are headed for the general: state Attorney General Kamala Harris, and Rep. Loretta Sanchez, the congresslady from Orange County whose big claim to fame is that she does the "whimsical" Christmas cards every year. For a long time they featured her cat, Gretzky, including this one from 2006 that was a gift unto the Internet Double-Entendre Machine:

But then in 2010 Gretzky died, as pets will do, and Sanchez sent the saddest Christmas card in human history:

Oh, also, the other thing to know about Loretta Sanchez is that in 2007 she angrily resigned the Congressional Hispanic Caucus after accusing the chairman, Rep. Joe Baca, of calling her a whore. Which is kind of ridiculous, since it's her sister Linda, also a congresslady, who got pregnant out of wedlock like a common Palin (but unlike a Palin, she got and stayed married to the daddy). So really, there are no whores here. The Sanchez sisters have the distinction of being the only pair of sisters to serve simultaneously in the U.S. Congress, also. Loretta may break up the act with her Senate run, since she's currently polling well behind Kamala Harris. As to Loretta's politics: She's from Orange County, has said some really stupid things about Muslims -- that "anywhere between 5 and 20 percent" support terrorism to bring about a worldwide caliphate, for instance. She's enough of a blue dog that a lot of Republicans plan to vote for her if she comes in second to Harris in the primary, as seems likely. So, no thanks. There's also enough "undecideds" in the polling to maybe possibly give one of the Republicans a shot at beating Sanchez, though no R's were above 10 percent in end-of-May polling.

Kamala Harris is way out in front in the polls, though we'd never be so foolish as to tempt the Wrath of the Whatever from High Atop the Thing by suggesting she has a lock on the election. But we're quite happy to say why she's pretty nifty, like even beyond the fact that a lot of Americans first heard of her when Barry Bamz called her "by far the best looking attorney general." Suddenly Fox News discovered that it was untoward to talk about women politicians' looks, and Yr Editrix lost her Feminist Card by agreeing that Kamala Harris was a lot easier on the eyes than Eric Holder and Ken Cuccinelli rolled together.

As for doing some Attorney Generalling, Harris has done good things like bringing down the Hammer of Justice on the scammy scuzzbags of Corinthian College, for doing fraud and general grossness. Harris also figured in a surprising number of Wonkette stories last year about that moran attorney who wanted to put a "Shoot The Gays" initiative on the ballot, mostly because she tyrannically wouldn't let him do that.

California A.G. Kamala Harris Will Sue Your Worthless Made-Up For-Profit College Out Of Existence We Hope

Harris does have one seriously odd Wonket moment, which doesn't appear to have made any difference to the campaign, probably because it was too weird to even count as a "scandal": Last year, one of her aides, Brandon Kiel, was arrested for impersonating a police officer due to his involvement in what was described as a "Masonic police force" -- he was stupid enough to think that his pretend association of Knights Templar was important enough that he contacted actual law enforcement officers to see how his group could "help" with keeping the peace, and maybe fighting off ninjas or something. As of yet, it doesn't look like there are enough Alex Jones fans for that to affect Harris's chances.

Harris also gets big props (ha! ha!) for having refused to defend Proposition 8, the no-gay-marriage law that was finally tossed by the Supreme Court in 2013 on the same day it threw out DOMA. Since Prop 8 was thrown out when the jerkwads who tried to defend it were ruled to not have standing, you can indirectly thank Harris for Prop 8's demise. So what we are saying is we like Kamala Harris a lot and expect her to be every bit as infuriating to rightwingers as Barbara Boxer was, long may she do Senatoring.

Even if the top two spots in the primary aren't likely to make for much of a surprise, let's just take a few minutes to appreciate the weirdos who were drawn to the Senate race by the low, low filing fee of $3480, some nominating petitions, and two boxtops from your favorite cereal.

Some of the candidate statements from the Secretary of State's office are simply precious. There's Democrat Massie Munroe, who promises to end "international bankers' rule and their financial exploitation of nations" as well as "ending mind control slavery" and "non-consensual human experimentation." You'd think she'd be making a bigger fuss about those Masonic Police. Munroe goes on to explain:

Through my national and international research and political activism, I identified "mind control slavery" by satellite energy technology weapons and social engineering programs that have been in continual development for the past 50 years and facilitated their "declassification". As a result, I came under heavy sanctions that are ongoing.

And yes, she has a website where she goes into even further detail, asking the really important questions about American Democracy:

What freedom is there, I ask, if there is not the freedom to think one's own thoughts free from interferance such as that from Voice to Skull (V2K) mind control technology, to be able to hold one's own beliefs, to decide when to sleep, or not to sleep, to dream one's own dream-state dreams, to experience one's own emotional state, to own one's own mental state, etc.?

You sort of have to like a candidate who lists a Mother Jones piece on "My 6 Favorite Candidates for Senator From California" -- a list of the goofiest, that is -- on her "endorsements" page.

It's not every candidate who's willing to come right out and say they're for human trafficking. No website, but her mainstream Facebook page has exactly the same ALL-CAPS message printed again and again. In it she promises to "SWEAR IN THE NEW UNITED STATES SUPREME COURT JUSTICE & BOOST BOTH DEFENCE & DEFENSE!" and assures us

I AM THE RIGHT LEFT UNITED STATES SENATOR TO REPRESENT THE STATE OF CALIFORNIA DUE TO MY EDUCATION, EXPERIENCE, AND VISIBLE WHITE HOUSE WWW.WHITEHOUSE.GOV WORK, INCLUDING TARGET CENTRAL INTELLIGENCE! EUREKA! I FOUND IT!

As if that weren't compelling enough, she closes the deal with this stirring peroration:

I WILL SURELY INCREASE MORE LEGISLATIVE GOOD NEWS FOR THE STATE OF CALIFORNIA & BEYOND THAT RESPECTS LAW & ORDER! IN ADDITION, I PROMISE TO GENERATE KEY & CORE COMMEMORATIVE SOLUTIONS IN LINE WITH THE CONSTITUTION OF CALIFORNIA, AS WELL AS THE U.S. CONSTITUTION, AS PRESIDENT CRISTINA GRAPPO, THE COMPETENT & EFFECTIVE VISA LEADER IN OFFICE!

We like her a lot more than that sourpuss Massie Munroe, that's for sure.

There's also Paul Merritt (no party preference), who can't seem to decide between first person and third person in his candidate statement:

Also with no party preference is Don J. Grundmann, who also doesn't have a candidate statement, but does have a website, www.fightthepower.org, which despite the Public Enemy reference is your standard collection of rightwing looniness about the IRS, the Federal Reserve, and of course the gay/transgender plot to recruit all our children into perversion. Also, he offers us "THE TRUTH about the Matrix," which we thought might simply explain that one good movie didn't really make the Wachowskis cinematic geniuses, but instead seeks to explain something about how RFK's assassination was part of a hoax perpetrated by the same shadowy conspiracy that rigs the economy and steals from you through the income tax. Also, he'll eliminate racism by defunding Planned Parenthood. Yup. He's crazy, but not all that funny.

In a similar vein is partyless Jason Kraus, who wants to abolish the income tax and replace it with a graduated sales tax, except there'll be an exemption for some food: "All fresh fruits and vegetables (nothing canned), nuts (unsalted), refrigerated meat and dairy (excluding anything with added sugar or sugar substitutes) will be tax free." He's also written a "novel" called Late Bird, whose main character, "Falcon Sane," wants to become President and save America from itself. We have asked for a review copy, but may break down and blow ten bucks on the e-book. It looks like it has a happy ending:

As a successful businessman, and with an incredible woman at his side, Falcon turns his passion toward fixing the corruption of his beloved America and runs for president. His message is clear: United, we can make a difference.

No Party Preference candidate Jason Hanania's candidate statement is the most succinct of the bunch; he says only "01100101," which is binary code for the letter "e" as in e-voting. He told Vice all about his cool plan to "reengineer democracy using electronic voting software through which every American votes on how their elected officials should vote. With this system, every American can have a seat at the legislative table." Which rather negates the need for legislators altogether, doesn't it? He admits it would be complicated, but "it's easier than putting a man on the moon!" Don't see how that could possibly go wrong, as long as you don't mind our laws being written by 4chan.

And finally, there's the enigmatic Ling Ling Shi, who has no photo in the voter guide, no website, and whose candidate statement reads only "Run for God’s Heart and America’s Freedom, challenge 10 giant chaos in economy and economy-related sectors." We were rather hoping this candidate might propose fighting the 10 giant chaos with a force of giant robots, but a bit of Googling found what appears to be a book by the same person. A disappointed reader dismisses it as "fundamentalist religious bollocks," so we guess we're stuck with 10 giant chaos after all.

The mainstream Facebook lady is looking better all the time.

Want to send some Ameros to Kamala Harris? Here's her ActBlue donation page! You want to support any of the others, that's your business, bub. If you'd like to support Wonkette's 10 giant countdown of ALL this year's U.S. Senate races, you can hit the tip jar here. It's so much easier when we don't have to use mind control on you.