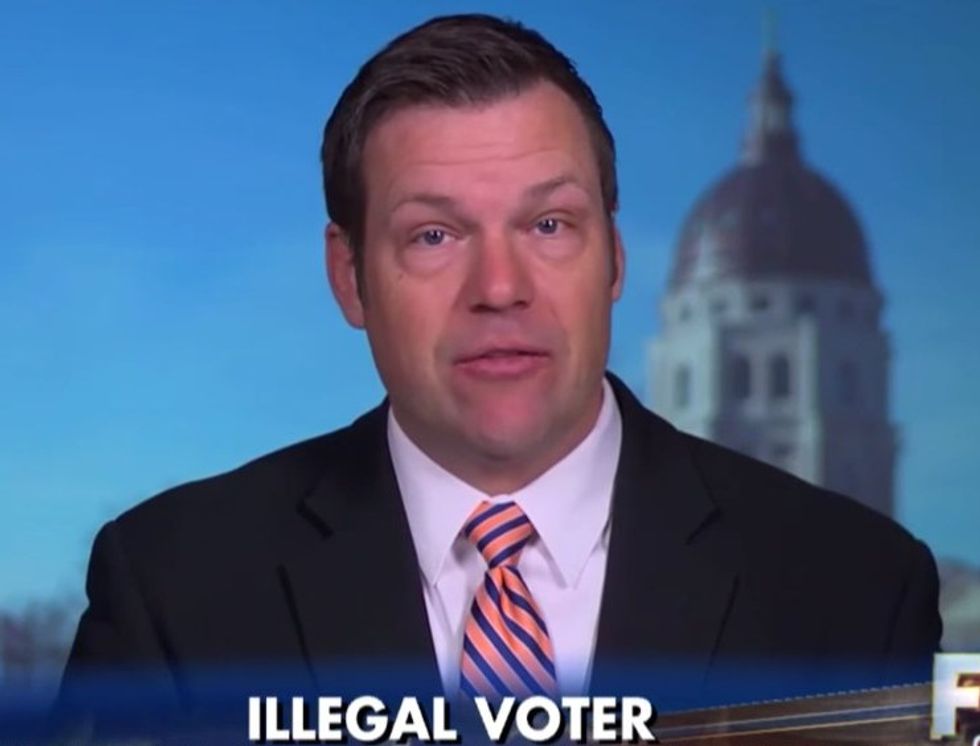 The Presidential Ratfucking Commission failed to find those three million illegal voters in California. Actually, they failed to find even one illegal voter. Nonetheless, President Trump abruptly shut down the commission last week, blaming mean Democrats who kept clobbering them in court and refusing to hand over voters' Social Security numbers. But could there be more to it than that?

Many mostly Democrat States refused to hand over data from the 2016 Election to the Commission On Voter Fraud. They fought hard that the Commission not see their records or methods because they know that many people are voting illegally. System is rigged, must go to Voter I.D.

On December 22, D.C. District Judge Colleen Kollar-Kotelly ordered Kobach and his cronies to turn over all their communications to Matt Dunlap, a Democratic member of the Commission. Seems Kobach and his buddies had been conducting the real business among themselves, excluding the four Democratic members. Dunlap, Maine's Secretary of State, successfully sued to force disclosure of all Commission documents, including who hired a researcher who was arrested in October on child pornography charges. But now the Department of Justice is refusing to give Dunlap the information because he's no longer a member of the Commission. Because there is no Commission. Which is mighty convenient!

Dunlap is not here for this bullshit.

Perhaps the only surprising aspect of the Department of Justice response is their rich blend of arrogance and contempt for the rule of law.

We'll have to see if the Court allows the Trump Administration to memory-hole the entire Commission.

Meanwhile, Kobach is jumping up and down shouting that Democrats should stop calling it a win, because the Department of Homeland Security is taking over the investigation. Kobach's sidegig at Dead Breitbart's Home for Milquetoast Fascists meant he was on-hand to froth at the mouth about all those illegal voters DHS was about to turn up. And then who'll be calling who a fucking idiot!

“What’s happening is a tactical shift where the mission of the commission is being handed off to Homeland Security without the stonewalling by Democrats,” Kobach told Breitbart News.

“I’ll be working closely with the White House and DHS to ensure the investigations continue,” Kobach continued.

Spoiler Alert: Everyone will still be calling Kobach a fucking idiot. And DHS has no intention of cleaning up after Kobach shit the bed.

At the President's direction, the Department continues to focus our efforts on securing elections against those who seek to undermine the election system or its integrity. We will do this in support of State governments who are responsible for administering elections. Mr. Kobach is not advising the Department on this matter.

New: DHS statement says Kris Kobach not advising agency on election work, vague on what it will do to study voter fraud. pic.twitter.com/5LMuMiAm0w

And just in case Jeff Sessions gets any funny ideas, the ACLU has filed suit to remind the DOJ that it already agreed that no voter data can be transferred to any other government body, including DHS.

Stick a fork in this vote fucking commission, because it is done! How's that for Monday morning Nicetimes? Don't say we never gave you nothing!

Wonkette is ad-free and supported SOLELY by readers like YOU! Please help us keep laughing at Kris Kobach FOR EVER!