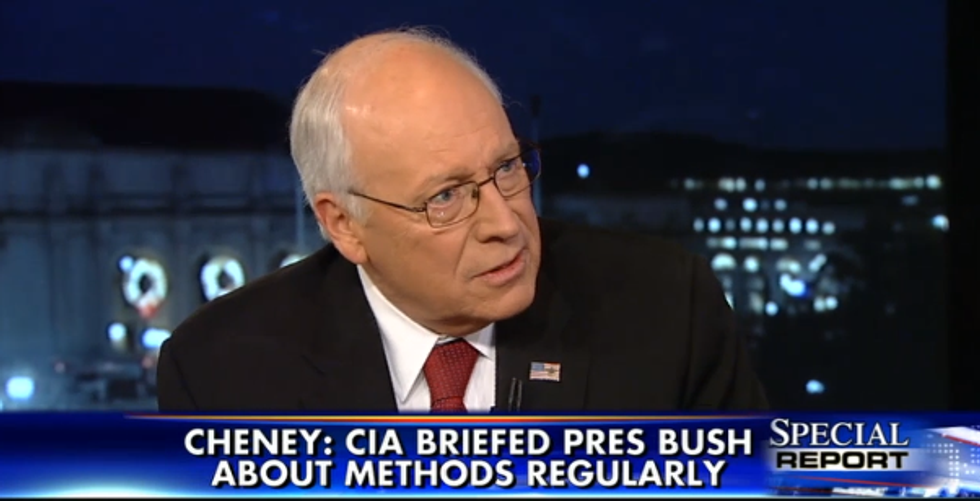 Dick Cheney, the dark lord who makes Satan himself cringe, wants you to know a few things about that Senate report on torture that he has not read but knows is not only "hooey" but also "full of crap."

In an interview on -- where else? -- Fox News, Cheney explains that, first and foremost, the only people who believe this anti-American liberal claptrap fairy tale report besmirching the good name of our CIA are a bunch of dumb terrorist-loving Democrats like Sen. John McCain. Which is "a classic example," Cheney says, of politicians "throwing professionals under the bus," just like they did in Iran contra. Free Ollie North!

For another thing, forget that nonsense in the report Cheney hasn't read that George W. Bush, the so-called acting president at the time, was kept in the dark about the torture program and was shocked and awed when finally clued in about it. Of course he knew about it all along, and of course he loved it too!

He was, in fact, an integral part of the program. He had to approve it before we went forward with it. […] I think he knew everything he needed to know and wanted to know about the program.

No! Not sweet dumb innocent Dubya! He couldn't possibly have known the specific techniques the CIA was using to torture the crap out of detainees, could he?

"I think he knew, certainly, the techniques. We did discuss the techniques. There’s nothing -- there was no effort on our part to keep him from that." Aw, that's nice that the vice president didn't even try to keep the actual president in the dark about the operations of the CIA. Thoughtful!

So the notion that the committee’s trying to peddle, that somehow the agency was operating on a rogue basis, and we weren’t being told, or the president wasn’t being told is just a flat out lie.

Thanks for confirming that for us, Dick. We'd hate to buy into the notion that the president was too busy falling off his bike and choking on pretzels to know exactly how we were conducting our torture program. After all, he did tell us he was The Decider and The Commander Guy. Good to know that applied to our torture programs as well. It would be a terrible shame for anyone to think Bush wasn't completely behind the torture program from the beginning, or that once he did finally learn about it, it offended his delicate compassionate conservative sensibilities.

Nope, says Cheney, Bush was "fully informed." And those rumors that when Bush learned of certain details of the program, he "expressed discomfort"? Pffft!

"I've never heard of such a thing," Cheney insists.

It's refreshing that while some Americans, including Democratic senators, simply do not want to believe that bumbling idiot George Bush was just as involved and enthusiastic about our secret torture program as his smarter and eviler puppet masters, the evilest one of all assures us that Bush is just as guilty as the rest of them. Not that there's anything to feel guilty about, according to Cheney. But not according to people who actually know what they're talking about:

The UN, human rights activists and legal experts have renewed calls for the Obama administration to prosecute US officials responsible for the CIA torture programme revealed in extensive detail following the release of a damning report by the Senate intelligence committee. [...]

In Geneva, the United Nations’s special rapporteur on human rights and counter-terrorism, Ben Emmerson, said CIA officers and other US government officials should be prosecuted.

“The fact that the policies revealed in this report were authorised at a high level within the US government provides no excuse whatsoever,” Emmerson said in a statement.

While Cheney may think there's nothing wrong with anally raping -- sorry, "hydrating" -- detainees and even, oops!, accidentally murdering them to death, it's a little refreshing to know that in the liberal fantasy land where Cheney and his accomplices and the officials who carried out these heinous programs are ever prosecuted for their crimes, Cheney wants us to know for a fact that yep, George W. Bush should be up against the wall right next to him. Thanks for that, Dick.