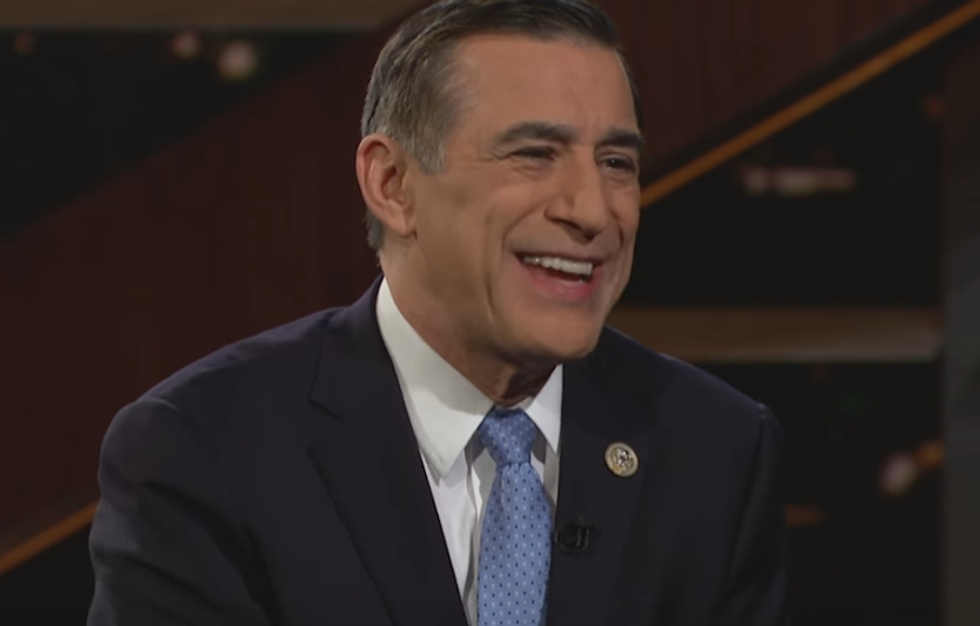 Correct about a thing?

So, it's time to check in on Donald Trump's Russia scandal, about which there are still so many things we don't know! A big thing we DO know is that dickbag Trump-supporting congressman Darrell Issa, who is a dickbag, went on the Bill Maher teevee program Friday night and said there needs to be a special prosecutor appointed to investigate all of Trump's Russian ties, because WAIT WHAT? Holy shit, a lot of Democrats haven't even called for that yet! Darrell Issa LOVES to investigate things, but we are very surprised that Issa actually thinks we need a full investigation with a special prosecutor for HIS BOY TRUMP. He even said Attorney General Jeff Sessions, who is so close to Trump they braid hair and talk about boys together, should recuse himself!

On top of that, Issa confirmed that Vladimir Putin is a giant murderous dick!

There's blood in the water, y'all:

So what happened? Was Issa drunk? Did somebody tell him it was opposite day and he should go on the Bill Maher show and be SANE for a change? We dunno, but he said basically the same thing to Politico on Saturday:

"My view is: it's extremely important that Congress point the guns at the same direction that they were pointed,'' said Issa, who as the powerful House Oversight chair was a GOP pitbull who lead dozens of headline-making investigations on Obama administration matters ranging from the "Fast and Furious" gun sting to Benghazi and IRS' oversight of grassroots conservative organizations.

Under the Trump White House, Republicans must continue to "demand what we were demanding: transparency, accountability,'' Issa said in an interview with POLITICO. "We do need a government that is accountable to us.

"And this is the best time to show leadership.....we need to seize the opportunity and really push hard to have access so that no sacred cows are protected," he said. "For credibility, we have to hold this president to the level of transparency that the last president took every effort to thwart."

Huh! Is Darrell Issa growing a spine somehow? Meh, we doubt it. Politico points out that Issa only just barely won re-election, and his district has a growing Latino population, and the head of the Democratic Congressional Campaign Committee, Tyler Law, says Issa's statements "have little meaning after spending the last year as President Trump's biggest cheerleader." Fair enough!

But it's still very HUH! What shall we make of this? Well, we remember last week how Trump's White House tried to get the FBI to do its bidding and plant stories in the media that said there was no "there" there on the Russia scandal. The FBI, unsurprisingly, told the Trumpers to fuck off. We have also now learned that White House Press Secretary Sean Spicer also enlisted CIA Director Mike Pompeo, GOP Sen. Richard Burr (chair of the Senate Select Intelligence Committee) and GOP idiot Rep. Devin Nunes (chair of the House Intelligence Committee), to get on the phone with reporters and say that New York Times story about the Trump campaign being in "constant contact" with Russians was bullshit. Golly, the Trump regime is very worried about that story! Is it because it is very terrible fake news? Or is it because journalists are getting too close to the truth?

Here is Rep. Nunes, saying there is no evidence he's seen that the Trump campaign was in contact with Russia. We don't know how he is saying this with a straight face, but then again, Nunes is a total fucking dipshit, and also, some Republicans are known to be craven liars.

House Intel Committee Chair @DevinNunes: "We have not seen any evidence" of contacts between Trump campaign, Russia https://t.co/VVvPO4yLUppic.twitter.com/YJhMvqnoMn