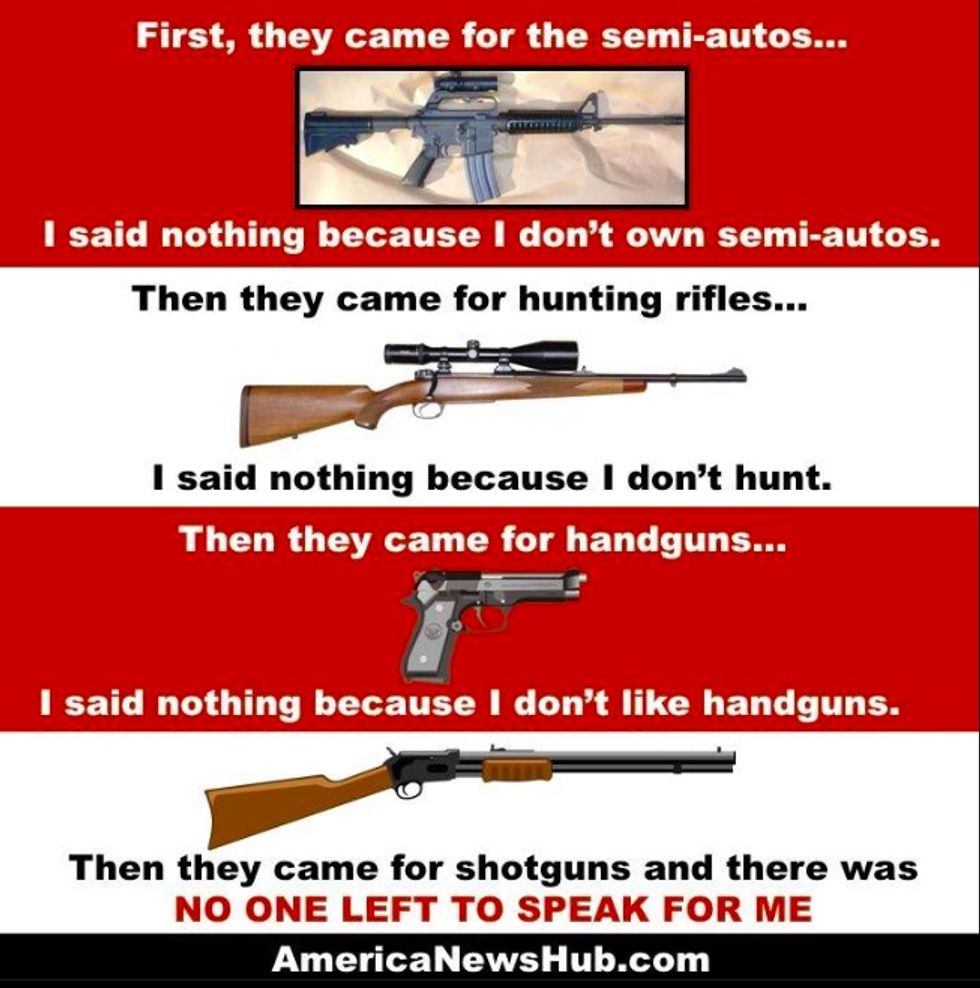 Break, heart. I prithee, break! Terrible sad news from the war on liberty! Dick's Sporting Goods has clarified what's going to happen to all the semiautomatic assault-style rifles that it's no longer selling at its "Field & Stream" outdoors shops, following the massacre at Marjory Stoneman Douglas High School. Instead of returning their unsold inventory to the manufacturers, Dick's is going to... (quick! please remove any guns from the room so they won't see this or hear you crying!) destroy the poor, innocent firearms.

“We are in the process of destroying all firearms and accessories that are no longer for sale as a result of our February 28th policy change,” a spokeswoman told the Pittsburgh Post-Gazette. “We are destroying the firearms in accordance with federal guidelines and regulations.”

The so-called assault-style rifles will be destroyed at the company’s distribution centers and the parts sent to a salvage company to be recycled, the Findlay-based retailer added. The company did not say how much merchandise would be included.

In addition to the assault-style rifles, which gun humpers keep insisting don't even exist so they can't be banned, Dick's will also destroy remaining inventory of high-capacity magazines.

Truly, this mass slaughter of innocents -- the guns, we mean, which never did anything; they were still in their boxes, you animals! -- will be met with sadness all over the gun world. We thought we had found a weird one-off with that little riff on Martin Niemoller's "First they came for..." meme up top, but no, that shit's all over the web, just part of the incredibly wrong yet incredibly popular Hitler/guns/Holocaust conflation that gun humpers just can't let go of.

We found an especially charming variant just now, although it dates from solemn commentary published in 2013, a few months after Sandy Hook, when Congress threatened to take away all the guns or at least close the gun show loophole, which is exactly the same as taking all the guns. You just know someone's having deep thoughts when they start with Martin Niemoller, then move to the next most obvious example:

Tyrants like to “make examples” of those who oppose them. As seen in the classic Star Wars Episode 4, The Empire uses its Death Star to vaporize an entire planet in order to make an example of it to any others seeking freedom from The Empire.

Fear kept the people in line. Fear is a powerful tool.

Within a few more column inches, we learn that crushing guns with a road roller in Mexico (after they were seized from drug gangs) will inevitably lead to the mass graves of Bergen-Belsen, fifty years beforehand, because that is history, man, and also heavy construction equipment being used for evil:

It's just so obvious when you think about it. It starts with Dick's Sporting Goods destroying perfectly good semiauto rifles, and ends with freedom itself being snuffed out. Or not -- as McSweeny's counter-riffed on the gun-humpers' viral Niemoller riff, also in 2013:

Then they came to require background checks, gun licenses, and regular gun safety courses, and I said, “All of this sounds fine to me. Guns are dangerous, and we regulate every other dangerous product. So, really, whatever you want to do on this is also fine.”

Ah, but gentle reader, there is an ironic twist, which you'll have to see for yourself because unlike some people who saw Walking Dead season finale spoilers on Twitter, we don't do spoilers, OK?

But let us think, at last, of the poor, poor guns, never to be used for plinking, varmint-hunting, a drunken murder of a spouse, or even suicide.

It's a start, right?

O, break, my heart, poor bankrupt, break at once!

And thou and that sweet Bushmaster ACR Tactical Rifle ("Coyote" model with folding stock and 30-round magazine) press one heavy bier.

Yr Wonkette is supported by reader donations. Please click here to help us bring about the end of civilization by demanding gun sense.