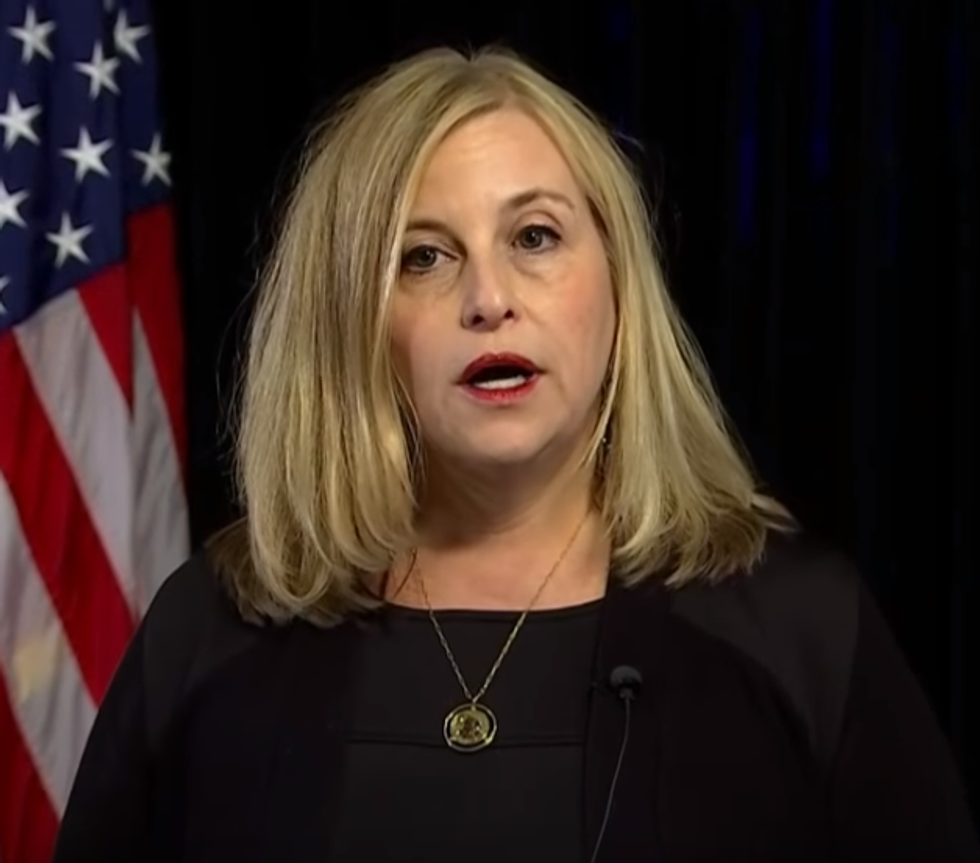 Loyal Wonkette readers will remember the tale we told a few weeks back, about badass progressive Nashville Mayor Megan Barry, who is in a wee spot of trouble right now, because not only did she bang a man what was not her husband, it was her head of security, and it seems like maybe she hand-picked him to accompany her on all her official mayoral trips, to romantic mayors' conferences in Greece and France. What? Mayors like to congregate in very sexxxy locations, we guess!

Now, The Tennessean is reporting that maybe perhaps Mayor Barry has been caught with her pants down committing an actual crime, according to the Tennessee Bureau of Investigation. The TBI says it has nakey pictures they think are Barry, from the cell phone of Sgt. Robert Forrest, her ex-boyfriend/hot cop, and according to time stamps, he was on the clock when they were taken. You see, part of the issue is whether Forrest was collecting overtime moneys while doing consensual naughty horizontal devil tangos with Megan Barry, or whether he did his security guard stuff like normal, then waited until after he clocked out to show the mayor his night stick. (We mean "penis.")

These photos, which were taken by Forrest's phone, seem to suggest there may have been hokey pokey going on during work hours. (Which ... OK, yeah that is bad, but who among us who's ever been involved in a torrid office romance has not destroyed a broom closet in their time? Care to comment, JOE SCARBOROUGH AND MIKA BRZEZINSKI?)

Soooooooooo ... either Forrest is very thorough at his job, by which we mean he took a vow to serve and protect Megan Barry ON THE VAGINA, or the taxpayers funded their various bone zone adventures. And now the TBI wants to see Megan Barry's phone, and has gotten a warrant for it, because she's like, "Nuh uh, you can't have my password. No reason."

Forrest also tried to cover his tracks like a teenager who got caught 69-ing under the bleachers at Homecoming:

Also on Forrest's phone, subpoenaed by the TBI earlier this month, investigators have uncovered 260 deleted chats between that device and Barry's phone number as well as 35 deleted call logs, the affidavit states.

TBI can't recover the texts from his phone, so that's why they're subpoenaing Barry's phone.

Barry is denying any knowledge of the pictures, so we should certainly consider the possibility that maybe Sgt. Forrest took pictures of other naked ladies during his trips with the mayor, or even worse, that he did a fucked up Eric Greitens thing to Barry:

In a written statement issued late Thursday, Barry said "the allegations of photos taken of myself are very troubling if true." She said she's not seen the photos in question, adding that if they are of me, "they were taken without my knowledge or permission and a complete invasion of privacy."

“Nothing in the affidavits released today, which should have been sealed until the conclusion of this investigation, indicates that I have committed any actions that violate the law. If any violations of the law occurred, they were in violating my personal rights," Barry said.

According to the TBI, the nude pics in question were taken by Forrest's phone during two trips he and the mayor took to Washington DC for a little alone time/official mayoral business, one in May of 2017, and one a few months later in October. In both instances, Forrest clocked out at 3:30 PM, then immediately clocked back in for overtime until 9:30 PM, and that's when he took the pictures and then emailed them TO HIS WORK EMAIL, like some kind of Paul Manafort.

About the nudie pic from the May trip:

“This image is of a nude female lying on a bed with a black purse beside her,” the TBI affidavit states.

Images taken during a radio interview in Washington show Barry with an identical purse prior to when the nude photo was taken, according to the affidavit.

On the October trip, Forrest took the naked picture at 3:39 PM, just nine minutes into his taxpayer-funded "overtime." The Tennessean notes that in this instance, though, Barry's schedule for the day said she was supposed to be in a meeting at that time. So ... the plot thickens? Is there a SECOND NAKED LADY?

As we see it, there are three possibilities:

Regardless, what a strange story this is becoming! We will be sure to update you on all the salacious details as they come out!