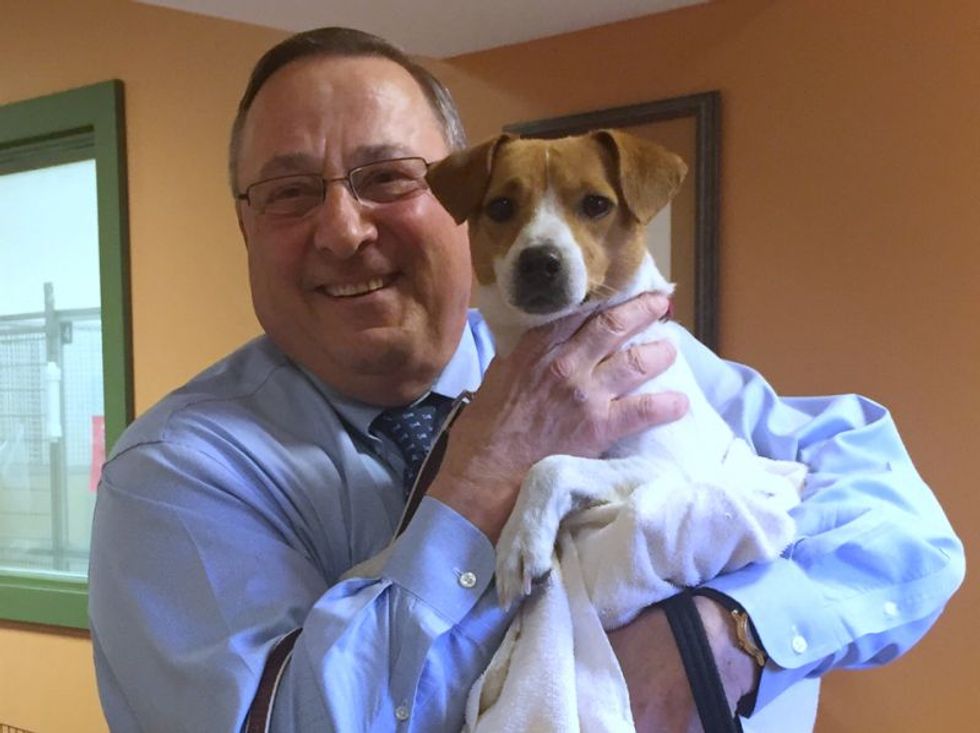 Looks like Maine Governor Paul LePage decided to take a day off from hoping heroin addicts die of overdoses and setting up camp deep inside Donald Trump's butt, to do a thing much less terrible than usual -- adopt a shelter dog!

Except that, because he is Paul LePage, he even adopted a shelter dog in a jerky way, by breaking the very rules of the shelter itself and basically stealing a lady's dog, kind of. TO THE TORCHES!

The Greater Androscoggin Human Society gave LePage a Jack Russell terrier mix that was not supposed to be available for adoption until the next day. "The governor walks in your front door and it sort of shifts things a little," said Donna Kincer, the shelter's development director/rule breaker.

The shelter is pretty ok with the situation, believing it will bring them good publicity.

Alas, this broke the heart of one Heath Arsenault, a woman who played by the rules and had intended to wait in line to adopt the dog the next day when he became officially became available for adoption -- and had even taken off work in order to be the first there. She had intended to adopt the dog to help her cope emotionally after a recent sexual assault, and "was attached to the hope that things could start getting better" once he was in her life.

But those plans were destroyed by Gov. Paul LePage, who did not want to play by the rules, and wanted to take the dog home with him THAT DAY, instead of coming back the next day and giving everyone a fair shot. Because he thinks he deserves special rules for being the governor or something. BOO.

As if that is not gross enough, LePage changed the dog's name from Jasper -- a perfectly good and not dumb dog name -- to "Veto." Ostensibly in honor of the 65 vetos he screwed up because he did not think he had to play by the rules of veto-making either.

Of course, Arsenault may get her dog yet, if LePage is anything like fellow Republican Rick Scott, who adopted a shelter dog (who he named REAGAN, because UGH) for campaigning purposes and then just gave it back when he was done! Good luck, lady! Hope LePage is true to form!