Did Romney Secretly Baptize Holocaust Victims To Make Them Mormon? 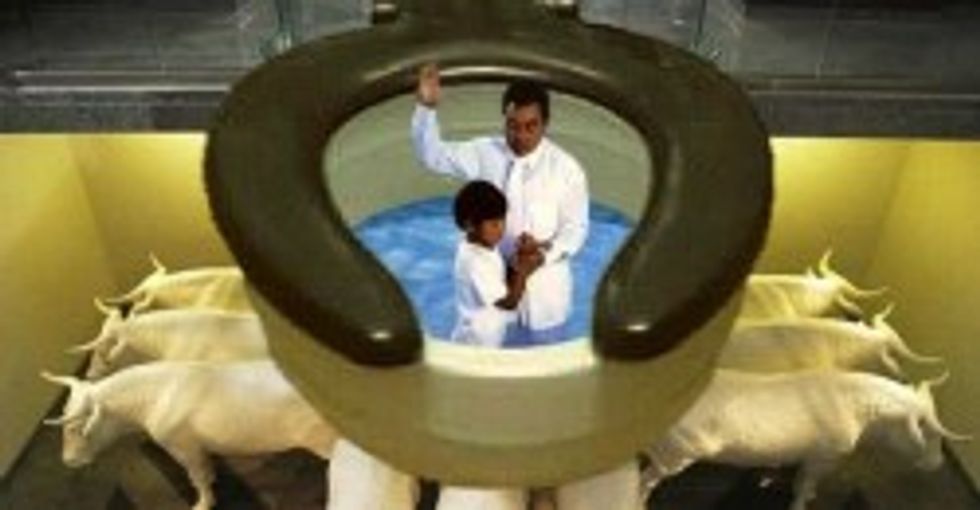 Here's a wacky fun-time ritual thing the Mormons do that you may or may not have heard about: they love to baptize dead people and thus declare them members of their magic moon faith, mostly so that the Mormons can claim a 7 billion person membership similar to the way that those McDonald's signs claim "50 billion anusburgers served since 1940" to reassure you that it's, like, really popular. This has, throughout history, not always pleased the relatives of the dead people who were baptized -- say for instance, the relatives of Jewish Holocaust victims who found their family members' names among those who had been posthumously converted to Mormonism. And so hey, know where there are lots of Jewish people these days? Florida. What's happening in Florida next week? A Republican presidential primary. Who's leading the polls in that primary right now? A Mormon. Has Mormon Mitt Romney been secretly baptizing Holocaust victims in his spare time?

He won't say! He will only say that he doesn't cheat and follows all the weird rules of his religion, and then he admits to baptizing some dead people in his youth the way that most other politicians would admit to smoking a little weed in college.

In 2007, when Romney made his first run for the Republican nomination, NECN in Hartford, Conn., asked him about baptizing the dead. He said he is "not a cafeteria Mormon" and adheres to all tenets of his faith. But Romney, a former bishop and top church official in Boston, referred specific questions to religious leaders.

When Newsweek magazine asked Romney if he personally had performed posthumous baptisms on anyone, author Jonathan Darman wrote, "he looked slightly startled and answered, 'I have in my life, but I haven't recently.' The awareness of how odd this will sound to many Americans is what makes Romney hesitant to elaborate on the Mormon question."

YES, IT DOES SOUND ODD. Hopefully the Jewish voters of Florida will not mind!?

Your Wonkette editors must now set to wondering: WHO ELSE DID MITT ROMNEY SECRET BAPTIZE, in our super secret Wonkette chat room.

Ken L.: ... the ritual has also probably been performed on Hitler, the seven dwarves, Kurt Cobain, and teevee's Gary Coleman.

Ken L.: i love mormonism so much. it is my favorite frontier religion by far.

Now watch the video of Mitt Romney refusing to admit working his moon magic on the zombies!