Dinesh D'Souza Wishes The Blacks Appreciated What Slavery Did For Them 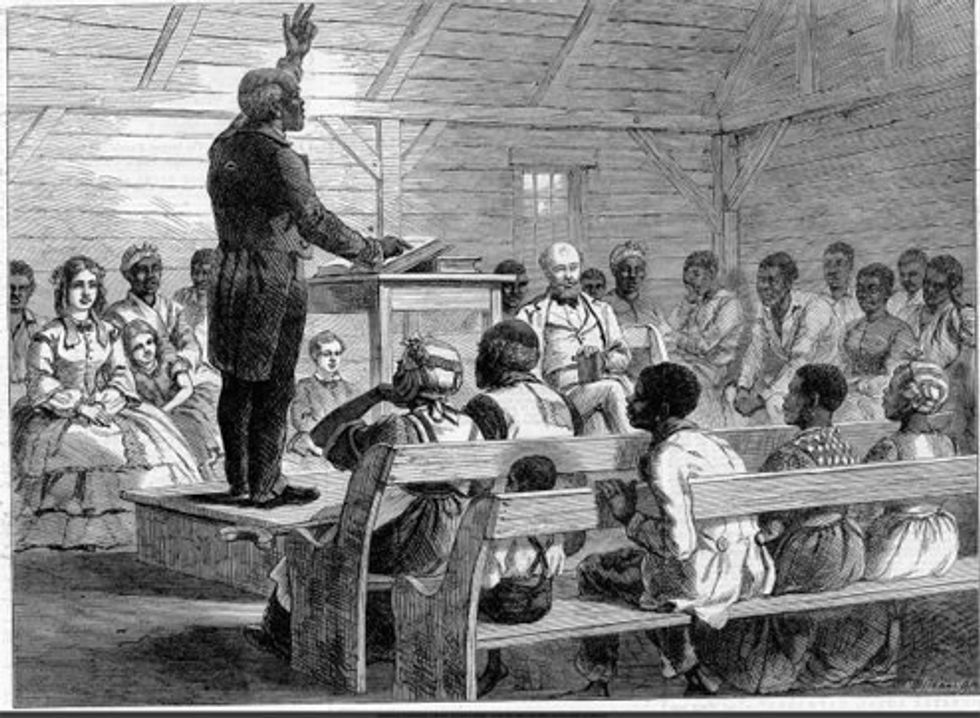 Just like the great philosopher Pollyanna, Dinesh D'Souza has a relentlessly cheerful message to minority types who may feel that they somehow got some kind of a "raw deal" from American history: Stop being such a gloomy Gus, think about how lucky you are that your ancestors were brought to America in chains or driven off their lands, and turn that frown upside down!

In his new movie and book titled America: Imagine a World Without Her, which sounds awfully like that "World Without Zinc" nightmare from The Simpsons, D'Souza offers the innovative perspective that instead of whining about reparations like that one guy with the funny foreign-sounding name, The Blacks should instead thank their lucky stars that they have it so damn good:

“Did America owe something to the slaves whose labor had been stolen?” D'Souza writes in the book ... The answer is yes, but “that debt ... is best discharged through memory, because the slaves are dead and their descendants are better off as a consequence of their ancestors being hauled from Africa to America.”

Debt: paid! Heck, even with redlining, Jim Crow, and continued discrimination to this very day (if there even is any such thing, and probably not), the blessings of living in America are so great that only an ungrateful subhuman would fail to recognize how much better blacks have it in America than in Africa, so shut up already and be glad you get to vote now and then.

Also, too, D'Souza recognizes that while "Indians have gotten a bad deal" -- the casino kind, not the tech-support kind -- they too should stop it with all the whining about how diseases wiped out 90% of the continent's pre-Columbian population nonsense. That's the past and feeling bad about it won't make anyone not die of smallpox! Instead, says D'Souza,

we should be clear about what the alternatives are ... You say, "Give us back the Black Hills," You point out that there is uranium and other minerals in those hills, and now that land is worth a fortune. Once again, no Indian tribe knew how to mine uranium and no Indian tribe knew what to do with uranium if they had it. Other Americans have added value to the Black Hills by figuring out how to tap its resources, and now the Indians want the land back so they can take advantage of what others have figured out how to do.

Jesus, if you stupid savages had just applied yourselves, maybe when someone names a football team "Redskins," instead of crying all the time you'd have a credible deterrent.

For that matter, we think Dinesh D'Souza could really benefit from following his own advice. Instead of playing the victim and pouting about being selectively prosecuted for a little bit of campaign finance fraud, to which he pleaded guilty, maybe he should just look on the bright side and recognize that 10 to 16 months in the crossbar hotel will give him all sorts of opportunities to notice stuff in Orange Is the New Black that the average viewer would just pass right over.

Plus, he'll have time to keep writing these wonderful counterintuitive analyses -- we never thought we'd ever see someone try to adapt Randy Newman's "Sail Away" into a serious argument.