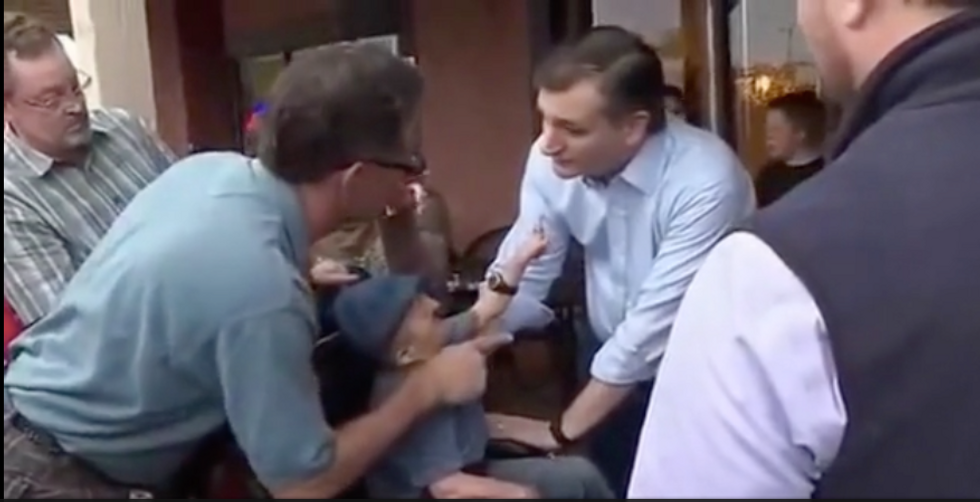 At a campaign stop in Evansville, Indiana, Ted Cruz happened upon Scott, a disabled man, and his family outside the Pie Pan Restaurant...and it did not go well.

Though the sound on the video is a bit muddled at first, you can hear the man accompanying Scott point out to Cruz that before the Affordable Care Act, “people like him would not be able to get health insurance at all.”

In response, Cruz, who has yet to provide any alternative to Obamacare, said “There’s no doubt that we need to provide care ...,” to which the man explained “But it was never done before. It was never done. Nobody did it.”

Which is true! We've actually been arguing about Health Care since the 1970s, when ANOTHER Ted (the Kennedy one) was pushing for single payer health care, like most every other industrialized nation on earth has, while Nixon was pushing for a mandate, not unlike Obamacare. In fact, for pretty much all of the years, the conservative alternative to single payer has been a system like Obamacare. Now that it's been enacted, they do not have much to go on.

Ted Cruz, being a warm and compassionate human being who is definitely not a lizard person, tried to explain “I can tell you millions have lost their health care at the same time,” but the family wasn't having it! (Why weren't they having it? Because nope!)

Scott's family may not have had Factcheck.org at their fingertips though. Because instead of telling Ted Cruz to fuck right off with his bullshit lyin', the man pointed to Scott and said “Well, but it made a difference to some.” TYPICAL SELFISH ENTITLED LIBERALS, AMIRITE? Why can't they just accept that Ted Cruz's mystery plan is totally better than Obamacare? Maybe it's just so awesome that he has to wait until he is president to tell you what it is, because otherwise everyone else would steal his idea?