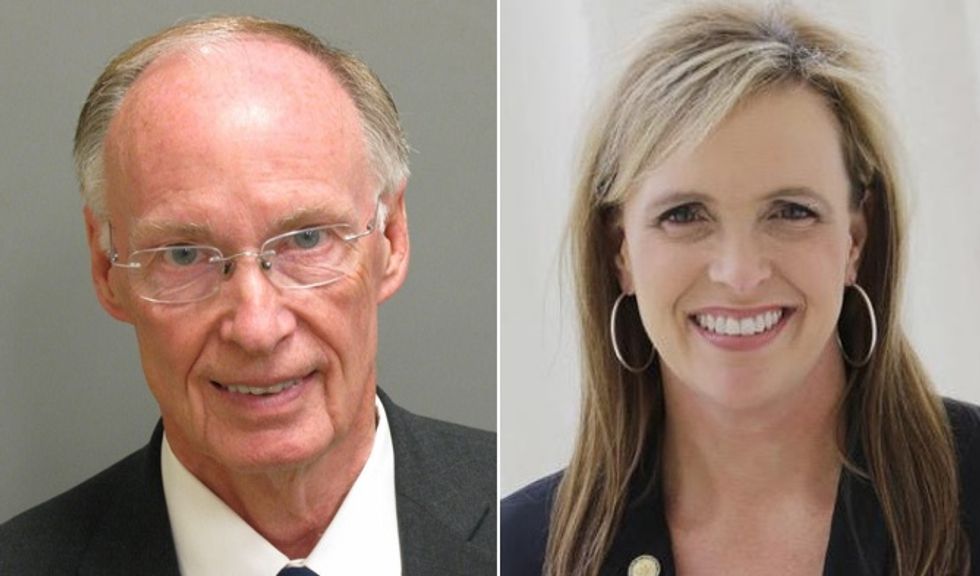 Alabama Governor Robert Bentley -- sorry, former Alabama governor Robert Bentley -- may have resigned yesterday, but we're still finding all sorts of yummy stuff in that special counsel's report prepared for the state House Judiciary Committee -- they won't be impeaching Bentley now, but the report offers some fine insights into how Alabama's politics went all screwy while Bentley and his mistress, Rebekah Mason -- also his top political advisor -- were busily not having sexxytimes, no not ever. Makes sense: Bentley and Mason took some of that sexual tension they'd built up in never boning and burned it off by coming up with a scheme to suppress the state's black vote.

It turns out that Rebekah Mason was the one-woman brain trust behind the idea to help Alabama's voter ID law more effectively keep Democrats out of office by closing almost all the Department of Motor Vehicles offices in Alabama counties with African-American majorities. The 2015 move prompted a national chorus of outrage and "WTF, Alabama?" news coverage; the official explanation was that the DMV offices were being closed because the state simply couldn't afford to keep them open. The fact that it would then become much harder for blacks to get the photo ID needed to vote was simply an unfortunate side effect of the state's fiscal troubles, don't you see. After the federal Department of Transportation told the state the move would violate the national Motor Voter law, the offices were re-opened, and Alabama had to work on finding slightly more subtle ways of keeping black people from voting.

The impeachment report doesn't accuse Bentley or Mason of breaking any laws in coming up with the scheme; rather, the episode is mentioned as an example of Mason's "increasing influence upon, and at times control over, Governor Bentley’s decision-making." Two members of Bentley's staff testified that as the affair progressed, Mason's influence on Bentley grew to the point that very little work could get done without Mason's approval; Bentley's press secretary, Jennifer Ardis,

stated that Governor Bentley’s typical reaction to any advice given without Mason present was, “What does Rebekah think about it?”

The scheme to close DMV offices was Mason's brainchild, according to the report; former Secretary of Law Enforcement Spencer Collier, who was fired by Bentley after going public about the affair, told the investigator the Alabama Law Enforcement Agency was summoned to meet with Ardis and Mason to discuss his department's budget priorities for 2015:

Collier reported that Mason proposed closing multiple driver’s license offices throughout the State and asked ALEA to put together a plan. It was Collier’s understanding that Mason intended the plan to be rolled out in a way that had limited impact on Governor Bentley’s political allies.

Collier also said he was concerned Mason's plan might violate the Voting Rights Act, so he reported the plan to the office of state Attorney General Luther Strange. It doesn't appear Strange did anything with that information; Bentley would later appoint Strange to fill Jeff Sessions's Senate seat after Sessions was chosen to be Donald Trump's Attorney General.

Collier said he agreed to Mason's plan, but wanted at least the cover of basing it on "an objective metric based on processed transactions per year to determine which offices to close." You know how the DMV closures were absolutely necessary because Alabama had a budget crisis? Maybe not so much -- Collier determined the total savings would be a whopping $200,000 a year. As AL.com explained, the closures had all the fiscal justification of a fart in a windstorm, since $200K was very little savings when the state had a General Fund shortfall of $100 million to $200 million -- possibly not even saving as much as the costs of the resulting lawsuits that led to the reversal of the closures. So, yeah, the only realistic motivation was racial, which we're sure will shock you and generate at least one or two deleted comments from geniuses who say if Bentley and Mason didn't say anything about race, it couldn't possibly have been racial, duh. Maybe there was a lot of voter fraud in those counties, or people just never drive there, did you ever think of that?

There's at least one good side to this whole sordid aspect of the affair: at least if there was any pillow talk about the voter suppression, that never made it into Bentley and Mason's text messages. "Baby, I want you to screw me harder than you did the black voters!" "Oh, darling, I want you more than a resident of Wilcox County wants a driver's license -- but at least I can get you!"

We have to count our blessings where we can.

[AL.com / Report to the Alabama House Judiciary Committee / AL.com too]