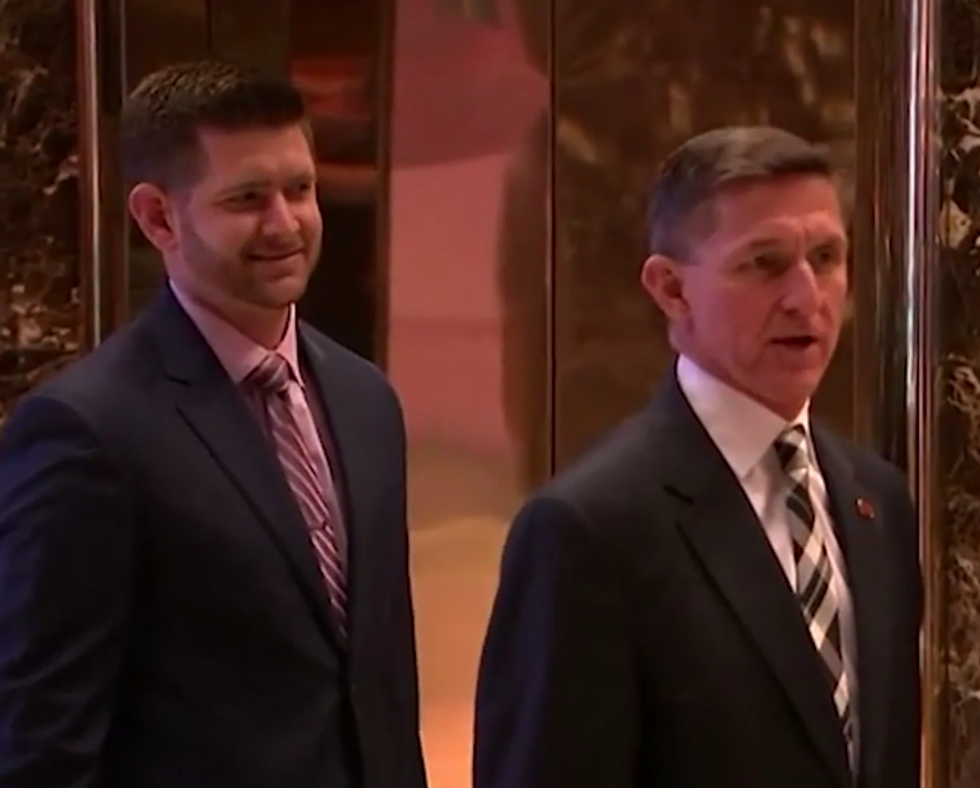 Michael Flynn with the thing that formed out of an egg and what was somehow Michael Flynn's fastest sperm.

OH GUESS WHO CALLED IT AGAIN? Wonkette called it again! We had been noticing that all these people like Paul Manafort and Roger Stone were coming forward saying, "Me! I would like to testify about the Trump Russia scandal so I can go to the fun jail where they have all the DVDs of 'Saved By The Bell' and you're allowed to put flair on your orange jumpsuit," but fired national security adviser/foreign agent Michael Flynn wasn't one of them! WHERE WAS HE? We surmised he might have either turned state's evidence, or might be about to think about doing so, and it turns out the latter is closer to the truth. Flynn has come forward and said he's willing to spill the beans for the House and Senate intel committees, and also the FBI, in exchange for immunity from prosecution, according to the Wall Street Journal.

Here, to explain why people ask for immunity in exchange for testimony, is Michael Flynn, with bonus footage of President Pussgrab talking about what "immunity" means:

FLYNN: When you have been given immunity, that means you have probably committed a crime.

Well, that wouldn't surprise us, considering how he was a foreign agent for Turkey who worked for the Russians sometimes too, and met multiple times with the Russian ambassador, then proceeded to lie about it a whole bunch. Also, as this Twitter thread explains, Flynn has always broken rules and laws he thinks are dumb (leaking classified information, for instance), because that's just the kinda guy he is.

Anyway, during the campaign last year, Donald Trump said, "If you're not guilty of a crime, what do you need immunity for?" We just don't know, Donald. (TO BE FAIR, when Trump and Flynn have made statements about immunity in the past, they were talking about Hillary Clinton, which is DIFFERENT BECAUSE SHUT UP. Lock her up! Lock her up!)

According to the WSJ, Flynn has "so far found no takers" for his offer, so make of that what you will. Maybe the FBI is really looking forward to putting him in jail. Maybe it's not convinced it can get truthful testimony from him. Maybe it thinks this is another scheme by the Trump administration, to get immunity for Flynn, who could then halfway implicate himself in something-or-other but pretend like he was the lone rat treason-doer, and the investigation will go "poof!" and never be spoken of again.

Usually, though, when the FBI grants immunity (the Senate and House committees don't really matter right now, because it's not like they can arrest him), it means the bureau is fairly certain a little fish can flip on a REALLY BIG FISH -- in this case, Trump probably -- and letting the little fish stay out of prison is a reasonable price to pay for the bigger catch.

The orange president from hell has, of course, weighed in on Flynn's offer, in his very presidential way:

Yeah buddy OK, thanks for adding your voice to the conversation, now go put on your bathrobe and watch TV some more, OK?

Flynn's lawyer, Robert Kelner, released a statement on behalf of his guilty/not guilty client, and it is OH BOY DRAMATIC:

Flynn "certainly has a story to tell," says the letter, but "the media are awash with unfounded allegations, outrageous claims of treason, and vicious innuendo directed against him." It's SO UNFAIR how the fake news media has been burning Goody Flynn for a witch, just because he might be an anti-American traitor. He just wants to CLEAR HIS GOOD NAME, which was really good to begin with, you bet. Why is everybody in Trump's inner circle such a freaking queen about everything?

Now, unfortunately, Wonkette regrets we must inform you that everything in this post so far has been fake news, because Mike Cernovich, that weird "alt-right" deplora-douche who still thinks #PizzaGate happened (AND MAYBE IS STILL HAPPENING!) tweeted that it is fake news, and also look who retweeted it:

Sorry, but we don't think Flynn's baby boy, who also has a real hard-on for #PizzaGate (for investigating it, you pervs! We are not saying Michael Flynn Jr. has a literal boner for pizza, or should we say, "pizza") is a very good source on whether his daddy is a crimer, because we don't think the apple fell very far from the tree with that one. We also think the apple was beaten repeatedly with the Stupid Stick during its entire descent out of that tree.

Anyway, so that's where we are! Will Michael Flynn GO TO JAIL for all his crimes, past, present and future? Will he flip on all the Trump regime tricks and send them to jail, while he gets to remain a free, unhinged idiot of a man? Will the FBI just tell him to fuck off? We don't know yet, but this movie keeps getting more and more fun to watch, so let's keep watching it!