Do Lawmakers Even Know How Babby Is Formed? A Vaginasplainer! 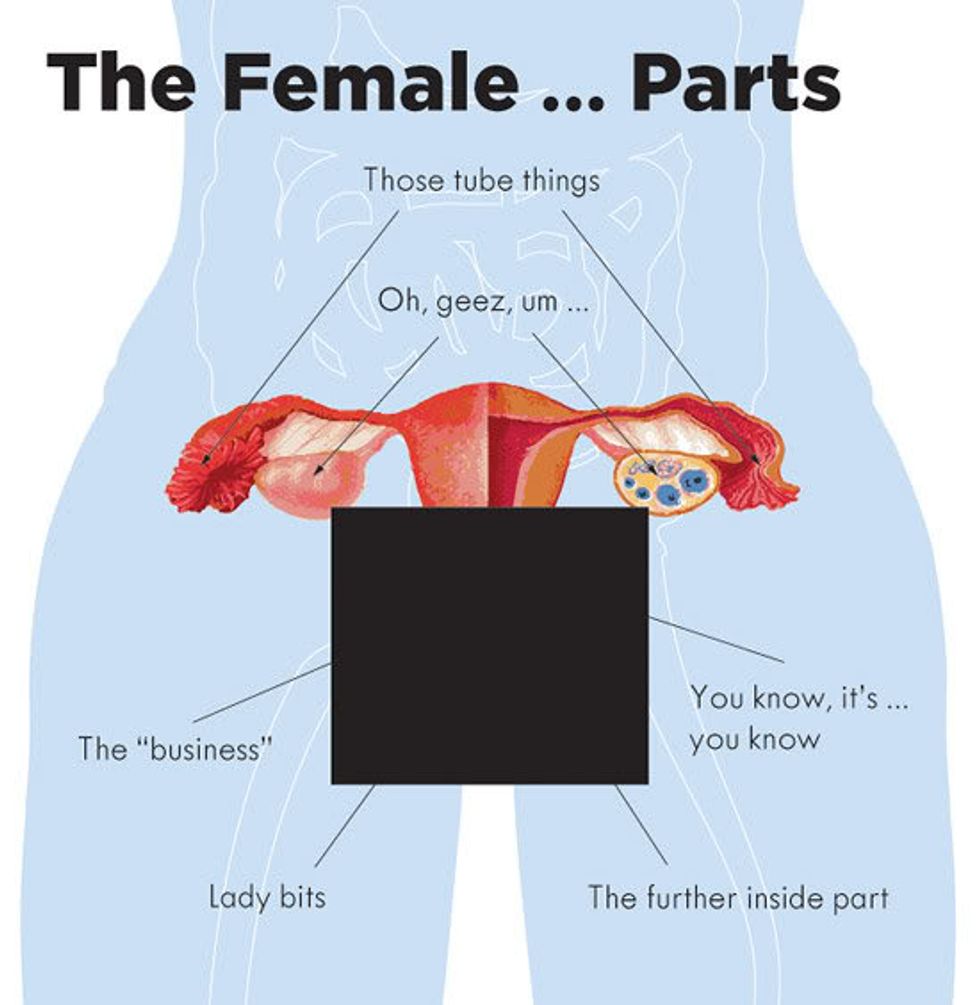 It's not that state legislators don't know where babies come from. They get that

But they are seriously confused about everything that happens between Mommy and Daddy in the Dark Under the Covers Time and Precious Bundle Has Daddy's Nose Time. Even the lady legislators seem to think that when Daddy rolls over and starts snoring, there is already a tiny human holding hands with Jesus inside Mommy's tummy. (Spoiler alert: There is not.) And when you combine ignorance of basic human biology with a belief that it is rude to talk about icky ladyparts, you wind up passing some truly malevolent, bizarre laws.

It is long settled law that if the state Senate is dumb, the state House must be dumber, and Iowa's politicians take these responsibilities seriously. March 7, the Iowa Senate sent over a bill that criminalizes abortion "if a pregnancy has reached 20 weeks post-fertilization or the fetus achieves viability." Which sounds illegal enough, but if you are a Vagina American who has made babbies out of her own body, you will notice that this is a peculiar method of dating a pregnancy. Here on Planet Earth, doctors calculate a pregnancy from the date of a woman's last period (LMP). And there are actualfactual good medical reasons for that!

Most women ovulate around around day 14 of their menstrual cycles, leaving them a 48-hour window of fertility before the egg dies. Because sperm can survive inside a woman's body for six days, fertilization may or may not occur contemporaneously with sex. Sex on a Tuesday might result in fertilization on a Friday! Like, whoa!

Did your parents tell you that you got your start in the back of a Chevy Impala? MAYBE NOT.

Dating a pregnancy from the theoretical date of "fertilization," rather than the method used by every obstetrician in the country, means that the law treats a woman as if she is two weeks less pregnant than her doctor does.

Let's say a woman gets her period on 1/1. Happy New Year! Extra cake for you, Honey! If she has a positive pregnancy test on 1/28, how pregnant is she???

So, if the Iowa Senate passes a law criminalizing pregnancy 20 weeks after fertilization, is that a 22 week abortion ban? No one knows!! You could try cornering an Iowa state Senator and asking him, but he'd probably stick his fingers in his ears and shout, "LaLaLaLaLa, I can't hear you!" when you got to the menstruation part.

Meanwhile, the Iowa House is doing its bit to make this law even worse. The bill that emerged from the House Human Resources Committee [sic, and ????] had the same 20 or possibly 22 week ban, added a 72-hour waiting period and forced ultrasound, and removed an exception in the Senate bill that would have allowed an abortion in cases of severe fetal abnormalities.

Then shit got weird. Rep. Shannon Lundgren, (R-Peosta, yes it's a place, we checked) shepherded the bill through the hearing.

At times during the committee hearing, Lundgren appeared to have difficulty answering questions about the implications of the bill and often reverted to stating that the bill was intended “to protect unborn babies.”

Rep. John Forbes (D-Urbandale) asked about the lack of exceptions for fetal abnormalities and about the limited scope of the exceptions for the health and safety of the pregnant person, and during the exchange Lundgren appeared to suggest that abortion care should not be an option for pregnant people with a deceased fetus.

“You’re telling me she would have to carry that dead fetus?” Forbes asked.

“The way this bill is written, and thankfully there are places like the University of Iowa perinatal care, hospice care, for situations like that,” Lundgren responded.

And then Shannon Lundgren found out what it's like to have an entire nation shrink back in horror because you are a heartless monster. She later claimed to have "misspoke" when she suggested that a woman whose baby had died should wait out the rest of her pregnancy in perinatal hospice.

"I have NO IDEA how vaginas work!"

Under normal circumstances, it seems unfair to pile on to some dimwitted legislator who thinks she is doing The Lord's Work. But Shannon Lundgren is a Vagina American who gave birth to two children and SHE SHOULD KNOW BETTER. She should be chastised severely with votes.

As for the bill...well, we'll see you in Court.

(For reals. Not like That Lunatic with his executive orders.)

On to Arkansas, where Governor Asa Hutchinson signed a bill this week whose stated goal was to prevent sex-selective abortions. The bill started out with some entirely bogus statistics about death rates from abortions.

For instance, the law states, "A woman is ninety-one (91) times more likely to die from an abortion performed at twenty-one (21) weeks' gestation or later than she would have been had the abortion been performed in the first trimester."

I think I'm going to take the word of the Journal of Obstetrics and Gynecology over the Arkansas Lege, TYVM.

But here's some good Arkansas logic:

Let's accept the ridiculous premise that women are always rushing off to get rid of that baby bump when they find it's missing a penis, because WTF?!?! Here's how Arkansas is planning to make us all safer.

And then the doctor should....? Is a hypothetical woman who has four daughters only allowed to have an abortion if she isn't pregnant with another girl? Is the doctor supposed to deny her abortion care based on his best theory of her intent?

BUT WAIT, THERE'S MORE! Here's a list of people who can go to court and get an injunction to stop a woman from having a sex-selective abortion:

A person who is the spouse, parent, guardian, or current or former licensed healthcare provider of the woman who receives or attempts to receive an abortion in violation of this subchapter; or The Attorney General [of the State of Arkansas].

That's right, ladies! Arkansas just gave your husband, parents, and any doctor who ever treated you the right to get a court to stop you having an abortion by claiming you're trying to select for gender. And don't forget the Arkansas Attorney General, too.

And, YES, this bill is an unconstitutional piece of crap that will get overturned before it ever goes into effect. It's a publicity stunt that will rack up legal fees before courts knock it down. But still! What the actual fuck is wrong with you, Arkansas?!?!

Did we give you a pure adrenaline rush of rage? Maybe release it by donating a couple bucks! Just click below!