Do You Love Being First Against The Wall? Then Dean & Deluca's $75 Ice Is The Ice For You 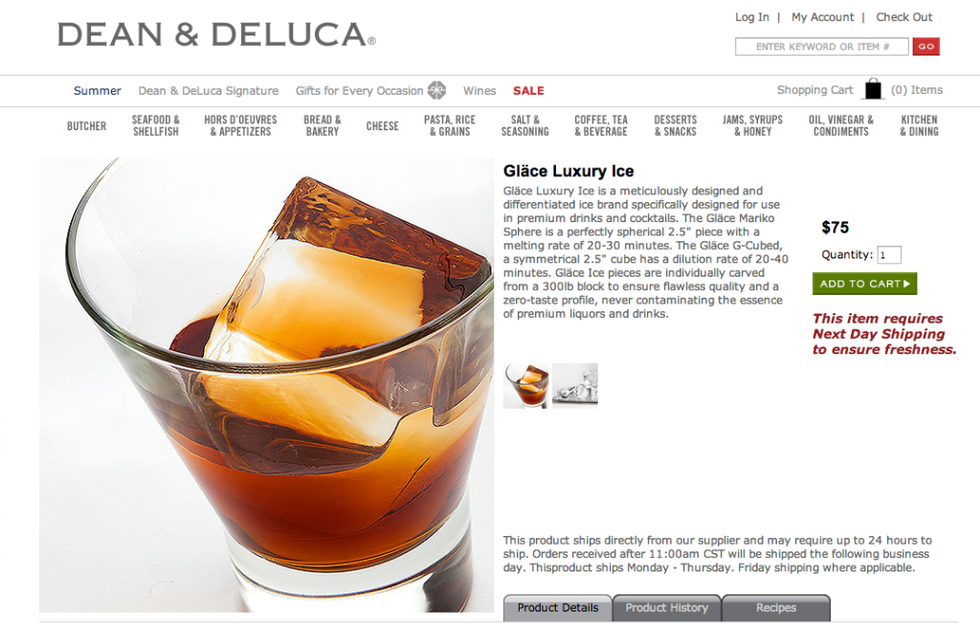 It had been another beautiful day for Harry. His wife had "opted out" and was now the most driven former brain surgeon to serve as PTA president that the whelps' pre-pre-pre-K had ever known. (Well, honestly, she was no better or worse than the last two. It turns out brain surgeons are pretty smashing at "ye olde" PTA. Thank goodness she had an outlet for her energy or he'd never hear the end of "I was a brain surgeon this" and "I used to save lives that.") She was pacing frantically through the kitchen now, searching drawers for she did not know what, her grimace smile drawn tight against her fatless face. He loved having all her energy devoted to him, and his seed.

His mistress had given him a top flight hummer, too, during the "lunch meeting" he'd scheduled-not-scheduled with Sachs, wink wink. So pliable, so venal, always happy to see him, never looked at him with cold efficient Borg eyes, picturing the icepick sliding deep behind his ear, like some people he could name.

Also, he had been astoundingly successful at "reorganizing" those fucking fucks at the plant. Let's see how you like your pink slips since you voted in the union, you bastard commie symps. Illegal? So fucking what. What's the NLRB gonna do, convene?

Nothing could ruin this perfect day, a day befitting a man like him, who had made himself from only the shell of his father's hundred-million-dollar firm ... WHAT THE FUCK THEY WERE OUT OF GLACE LUXURY ICE?

Myrna had one fucking job to do besides "volunteer" at the pre-pre-pre-K and suffer his big strong hand on her (frankly bony) frame, and that was to keep Harry in FUCKING LUXURY ICE.

How was he supposed to enjoy his Johnny Walker Blue on REGULAR FUCKING ICE, or -- worse -- NEAT? How would he be able to savor his mastery of the Universe, if the ice cubes ($75 for 10 of them) did not offer a dilution rate of 20 to 30 minutes, with a zero taste profile so his drink would not be polluted?

Harry picked a knife from the Lorenzi's Horn Steak Knife rack, and plunged it between Myrna's shoulders.

Bitch would not forget his ice again.