Does Fox Nation (The Website) Lie As Much As Fox News (The Cable Channel)? Probably! 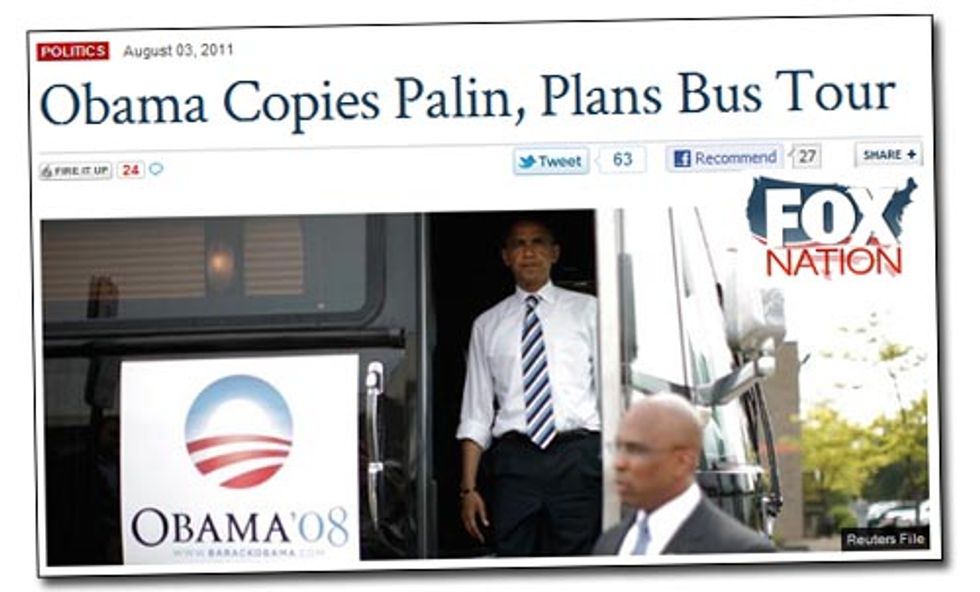 When Americans think of "lying Rupert Murdoch-owned filthyweasels spewing rightwing talking points," they of course think of Fox News. But There's a whole 'nother arm of the Murdoch Bullshit Machine that operates semi-independently of the Fox News domain, and that's their terrible stinky community website, Fox Nation (motto: "We're The One That Allows Comments"), which basically is a news aggregation site whose unidentified editors take stories from other sources, slap inflammatory headlines / summaries on 'em, and then presumably spend the rest of the day drinking heavily, which is perhaps the only thing they have in common with Yr Wonkette.

While the main Fox News operation is the monster that gets most of the attention from critics like Jon Stewart or Media Matters, Fox Nation is its pimply younger brother, always trying to keep up and usually in need of a shower. Blogger Mark Howard, of NewsCorpse.com, has addressed this inequity by devoting time on his site to a regular feature called "Fox Nation vs. Reality," and has collected 50 of his favorites into an e-book, Fox Nation vs. Reality: The Fox News Community's Assault On Truth (for Amazon's Kindle, but also readable with an app for computers & smartphones). Shall we now review this e-book? Yes, we shall. (We shall also announce our coming Wonket Book Club! You probably definitely want to read that.)

The first thing to get out of the way is that this is very much a collection of blog pieces, not a "BOOK-book" -- it's doubtful that this collection would ever be considered for a dead-trees version, but that's actually part of what makes e-books kind of fun: at just three bucks, there's a chance to try stuff that, like its authors and readers, wouldn't normally see much action between two covers. And while Amazon's direct publishing system can result in a lot of self-published dreck, Fox Nation vs. Reality is definitely not hastily written Furry porn. Sure, you could go to the blog and read each piece individually, but the collection is convenient, and if you have an e-reader, can be read away from a big ol' computer. Since the pieces started out online, the e-book retains their web links, which is another nice convenience.

But as a wise cockroach once noted, we shouldn't focus too much on "technical details when the main question is whether the stuff is literature or not" -- or at least the bloggy version of it. And on the whole, it's solid, fact-checky blogging that systematically takes apart the exaggerations, cherry-picking of facts, and outright lies that regularly crop up in Fox Nation articles. Sometimes it's just a little nudge from accuracy into nonsense -- a Reuters article about that dumb Sarah Palin movie said that its first showing, in Grapevine, Texas, was sold out, and then Fox Nation's headline proclaimed “Palin Film Selling Out in Theaters.” Other stretchers are more hilarious in their transparent idiocy, like this headline and photo:

That crafty Time-Travelling Obama went back to 2008 and copied Sarah Palin's completely novel idea of a political bus tour, which she invented all by herself in 2011, and then he returned to 2012 and copied her again! (It was a flawed copy, too, because Obama actually finished his bus trips).

Howard also has no end of fun calling attention to Fox Nation's selective use of poll results, like the headline trumpeting that "42% Of Americans Feel The Media Exaggerates Global Warming,” while the actual poll result showed that a total of 55% believed the media either had it about right (24%), or that the press actually underestimated its severity (31%). Virtually every Fox Nation story on last year's election pulled similar tricks to suggest that Obama would lose in a landslide, and for some reason, that also turned out not to be the case. In fact, fully 257% of Fox Nation's use of statistics has been proven to be dishonest.

Howard can be faulted for having his own tendentious tendencies, however, especially when it comes to the language he uses to mock Fox Nation. "Fox Nationalists" is fairly funny once, but the phrase turns up in just about every single piece (occasionally twice in a single article) and quickly wears out its welcome, as do earnest statements like this:

reporting the truth is not part of Fox’s mission. Advancing their partisan disinformation is the only reason they are in business.

Yes, it's accurate enough, but after reading several pages in a similar vein, we wanted Howard to stop pointing and shouting when a raised eyebrow would do the job. This may be less of a problem in the natural bloggy environment, and simply more obvious in the one-after-another context of a collection, but it feels at times like Howard is grabbing our lapels and telling us, "Lissen up for godssake, this is important!" (Yes, a Wonkette piece just said someone else might try to be more subtle. Add your own buttsex joke here.)

We have a couple of other quibbles about the way the e-book is constructed; it would have been nice if the original publication date of each piece had been included -- you can click the title and go directly to the original, but why should we have to? And while Howard is generous with web links to his own blog and to other web sources, for some reason he doesn't provide direct links to the Fox Nation pieces he critiques, or to the right-wing media they're often drawn from. To be sure, they're easily searchable, but a direct link seems more appropriate.

In one instance, that lack of links may have contributed to loose fact-checking: In September 2012, Fox Nation reblogged an article slamming the Southern Poverty Law Center for labeling an anarchist group as part of the "radical right"; while Howard correctly points out that the original and the reblog falsely linked the anarchists with the Occupy movement (the anarchists actually left Occupy because it it kept insisting on being so darn law-abiding), he goes a step further and claims that the original SPLC article

actually contains no reference whatsoever to the “radial right” [sic]...Nothing. Zilch. Not even an insinuation. There was no mention of conservatives, Republicans, the Tea Party, or any other component of right-wing politics.

Had Howard linked to the dumb American Thinker piece, it might have been clearer that the original piece was griping about SPLC including the anarchist story in its "Hatewatch" blog, which does carry the motto “Keeping an Eye on the Radical Right,” even if that claim was not made in direct reference to the anarchists. It's a bit of a fine distinction, really, but in the blogosphere's endless left / right scorekeeping, the replay shows Howard blew the call here.

FNvR is probably more for politics / media junkies than for the casual reader; whether it would convince a Fox fan that their favorite news source reguarly lies to them is debatable, but it is nonetheless a valuable contribution to the effort to chip away at Bullshit Mountain.

Fox Nation vs. Reality: The Fox News Community's Assault On Truth.E-book for Kindle, $2.99

And now, a special announcement for our more bibliophilic Wonkaderos! We are going to be starting up a an online book club for you people, right soon; format details still being figured out -- and brilliant suggestions are more than welcome in the comments, or if you're shy, email your Doktor Zoom at doktorzoom.wonkette at Yahoo dot com (shy people reading Wonket? It could happen, we suppose). We'll start by selecting a book, giving people 3 weeks or so to obtain and read it, and then a big weekend post where we will post a review and then discuss amongst ourselves, or at least tell each other which episodes of Star Trek the book reminds us of. Also, too, maybe we'll have a halfway-through livechat, if we can find a chat mechanism that is 1) archivable as a bloggy post and 2) not Google Plus chat, just because eew, Google Plus. We're thinking this is the sort of thing we could do every month! Whee!

Our first selection will be Distant Witness: Social Media, the Arab Spring and a Journalism Revolution, by NPR's Andy Carvin. Purchase link for the softcover ($20) is at the publisher, CUNY Journalism Press; If you want to get the Kindle e-book that gives a little kickback to Your Wonkette, that's 10 bucks at Amazon. If you use one of those Nook devices, that version is also a sawbuck, but no money comes our way, for which we has a sad. We will even allow you to read copies you check out from your socialist public library. We will have a somewhat more formal announcement of the Worthly Wokett Book Klub coming soon, with actual dates and such, as soon as your Doktor Zoom receives the review copy. Get on it, please, Fern at CUNY Journalism Press.