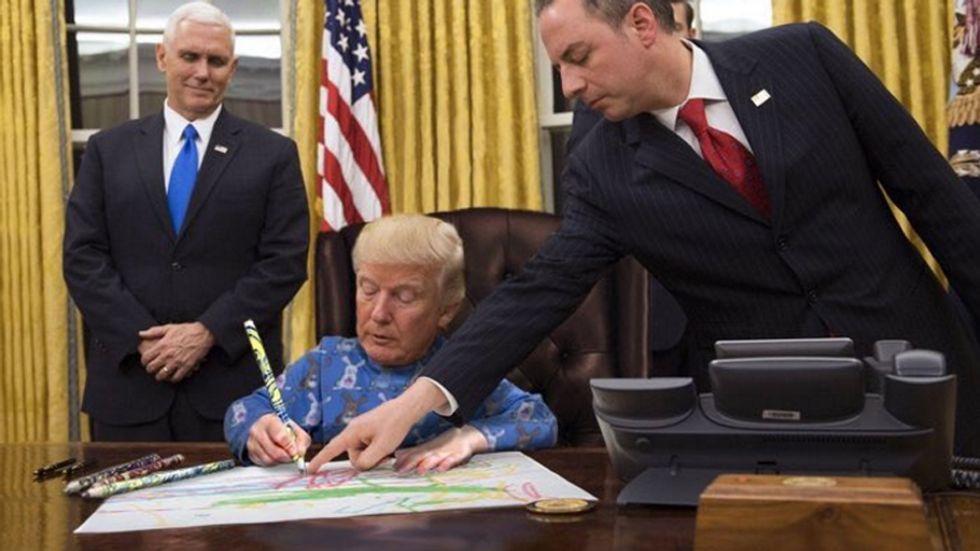 All those stupid numbers'n'shit give President Twitter Fingers a headache. He was the best student at Wharton, though, believe me. So he knows the way you math good is to start with the answer and then work backward to the question. Don't worry, the answer is always SCARY MUSLIMS ARE BAD, OKAY?

But we are nerds, not xenophobic sacks of rancid meat jelly. So let's see if we can spot the slippage here.

Right. Back in March, Donald Trump signed an Executive Order instructing the Justice Department to go find him all the immigrant crimers so he could hold up the list and say, "No more brown people! From now on, we're only letting in Norwegians!" The problem is those facts, with their lamestream liberal bias, keep insisting that immigrants actually commit less crime than people who were begatted in the US.

Undeterred, the Justice Department looked for a new question. What about terrorism? Foreigners gotta be more likely to commit terrorism, right?

Shot up a church to start a race war.

OH. Worse still, those very fine white supremacists kill many more people than Muslim terrorists. Which is NO FAIR.

But Jefferson Banana Puddin' Sessions is no quitter. The "president" asked for a steaming helping of racism, and Old Jeffy was fixing to deliver it.

"Divinity Fudge," he shouted. "I figgered it out real good! No one in Real America knows any dirty furriners, so we'll only count terrorists who commit their crimes with Not America. That way we'll keep out all the Iowans and such what don't know any skeery Muslims to commit crimes with!"

Which is how we wound up with this piece of crap "report" that tallies how many people were "convicted of international terrorism-related charges in U.S. federal courts between September 11, 2001, and December 31, 2016." Because if you leave out all the Timothy McVeighs, you get that list of brown people the boss has been looking for this whole time. Good job, Jeffy!

An analysis conducted by DHS determined that approximately 73 percent (402 of these 549 individuals) were foreign-born. Breaking down the 549 individuals by citizenship status at the time of their respective convictions reveals that:

 148 were foreign-born, naturalized and received U.S. citizenship; and,

But wait, you are saying, what are all those terrorist "not US citizens" doing here in the first place? You are very perceptive! In fact, somewhere between 80 and 100 of them committed their offenses in Not America and were brought here by the government to stand trial in American courts. That changes the math, if you are keeping count, since people we bring in to prosecute aren't actually immigrants. The White House, however is not keeping count. Which is why they sent Deputy AG Ed O'Callaghan up to Sarah Huckabee Sanders's podium to flog their doctored numbers yesterday. Nice of CNN to factcheck him in real time!

You will be FOR SHOCKED that Mr. O'Callaghan cites the report as a reason to get rid of family reunification, or "chain migration" if you speak in the Asshole Dialect. We got 26 immigrants convicted of "terrorism-related offenses" every year -- check out Just Security for an analysis of that bullshit term -- so we need to slam the door shut. (We also have 15,000 murders a year, but gun laws are right the fuck out. LOLsob.)

Here was Mr. O'Callaghan's response when someone pointed out the report's fantasy math.

So a few points to that: One is, this is the first iteration of this report in response to the executive order’s directives, and we, in working together with DHS, certainly expect to have more statistics and address some of the issues we weren’t able to address in this initial report in future iterations of this report.

In terms of the cases that are reported, I mean, if you do look at the cases, some of which are included in the Section 11 report, there are certainly cases that relate to conduct that has been committed in the United States — conduct that is in support of, for instance, al Qaeda or ISIS.

So what you're saying is, some of your numbers aren't total bullshit. Therefore, we should just take the whole thing at face value?

So, there are plenty of examples of conduct that was actually committed in the United States which would, in a way that we define it, qualify as an international terrorism investigation because it relates to a foreign terrorist organization or terrorism conduct.

So secondly — I mean thirdly, I would say, of course we’re trying to prevent, through any way we can — and the administration of course supports us — we’re trying to prevent terrorist attacks. And so the most successful prosecution that I’ve ever been involved with are ones where we actually are able to stop it at conspiratorial stage so that there are individuals who, clearly, through their conduct and their activity and what they’re saying, are agreeing to commit a terrorist act in furtherance of the goals of a foreign terrorist organization.

But we, in conjunction with our law enforcement partners, are able to prevent it, convict them, and then they’ll be included in our international terrorism offenses.

Dude, have you been drinking from Donald Trump's Diet Coke can? There are actual terrorist immigrants, unless there aren't. In which case, it's because you stopped them all from becoming terrorists with your mad cop skills! Even though deportations arising from "terrorism-related offenses" make up 0.0001144% of the 15 million people we kicked out since 2001. The point being, the sooner we start keeping families apart, the sooner America will be great again, right?

Not sure I agree with you 100% on your police work there, Ed. In fact, looks like you might have cooked the books to get a racist shitburger for your boss to savor during Executive Time.