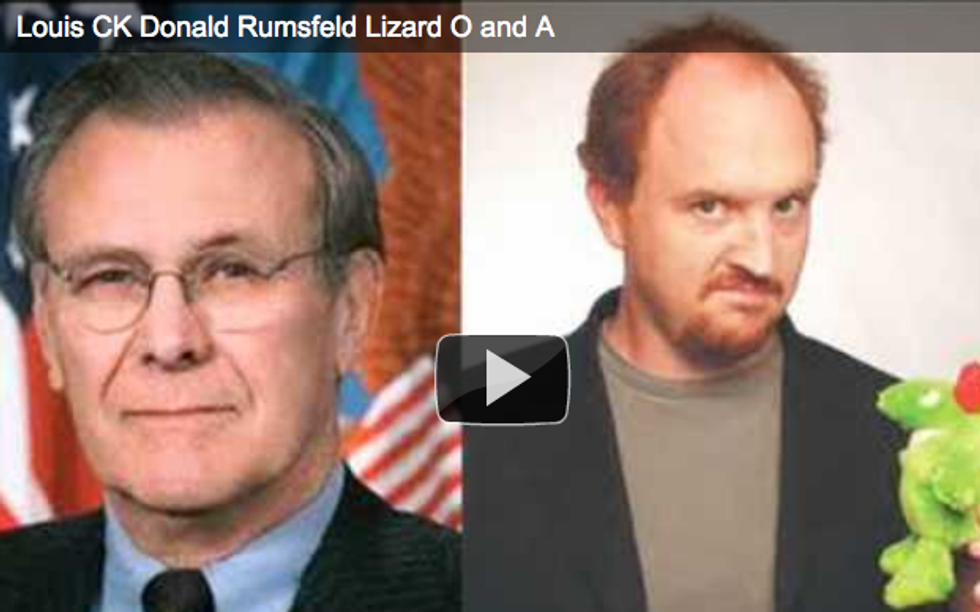 ARE DONALD RUMSEFELD AND DICK CHENEY LIZARD PEOPLE FROM OUTER SPACE WHO EAT HUMAN FLESH? For years, this is the one question the world has wanted to ask, as it is the only rational explanation for two beings that look human but in no way acted like it when they were in office. Yesterday, the world finally got its chance. Suspected lizard Donald Rumsfeld went onThe Opie & Anthony Show to discuss his new book. Luckily for humanity, our greatest living stand-up comedian, Louis C.K., was also a guest, and he asked Rumsfelf point-blank if he is a lizard. Rumsfeld's response? Some weird story about a guy buying him dinner that had nothing to do with the question. C.K. went on to ask the question a few more times during the interview, and specifically asked if Rumsfeld ate Mexican babies, but he wouldn't even explain why he wouldn't respond to the lizard question. The lizard question is first posed at the 2:37 mark in this video. After the interview, Louis C.K. supports his conclusion that Rumsfeld is obviously a space lizard.

It may be a little late to save any of those lives lost in Iraq, but we've got you cornered now, lizard man. [Splitsider]