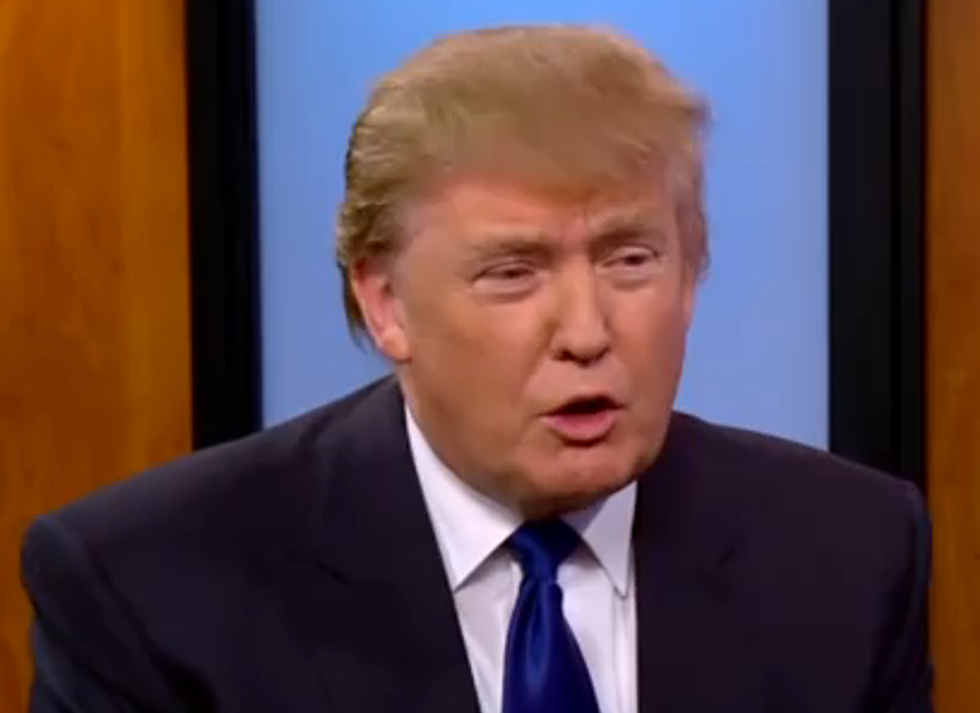 Donald Trump's increasingly ridiculous little overtures to the birthers and Teabaggers may be just a play to get attention for himself, but it turns out those people don't need much pandering or authenticity to jump on board, because Trump is nowrunning a strong second to Mitt Romney in New Hampshire primary polling. This is what happens, we suppose, when all of the "real" candidates dance around this birther "issue" and the fake one who stars in one of the broadcast teevee "reality" shows those people love so much mentions some token b.s. about the president's birth to the Fox News cameras. And who exactly are those people? "42% of primary voters firmly say they do not believe Barack Obama was born in the United States to 35% who believe that he was and 23% who aren't sure."

Trump leads Romney 22-21 with the birther crowd, but Romney holds the overall lead because he's up by a much wider margin with the folks who dismiss the birther theory.

Trump also leads Romney 23-21 with the Republican primary voters who consider themselves to be Tea Party members but that's only 30% of the electorate and Romney's up by a good margin with the folks who don't identify with that movement.

A two-horse race! Do voters want Change, or do they want Mediawhore Crazy-Pandering? If there's one lesson we've learned from the past few years, it's to never count out crazy. Crazy will fight even when there's no fight to be had and the opponent being pummeled is the body of bird that rudely died ON CRAZY'S PRIVATE PROPERTY.

Granted, this is a very early poll, and respondents could have been influenced by the birther question and Trump's celebrity, ignoring any real concerns about, say, the economy or all these wars we're in, that we may have. But saying the president's birf certificate is not the greatest plague on 'Merica right now is a very elitist, "educated" position that may well be out of touch with the general public and the people on the teevee box they adore. [PPP]