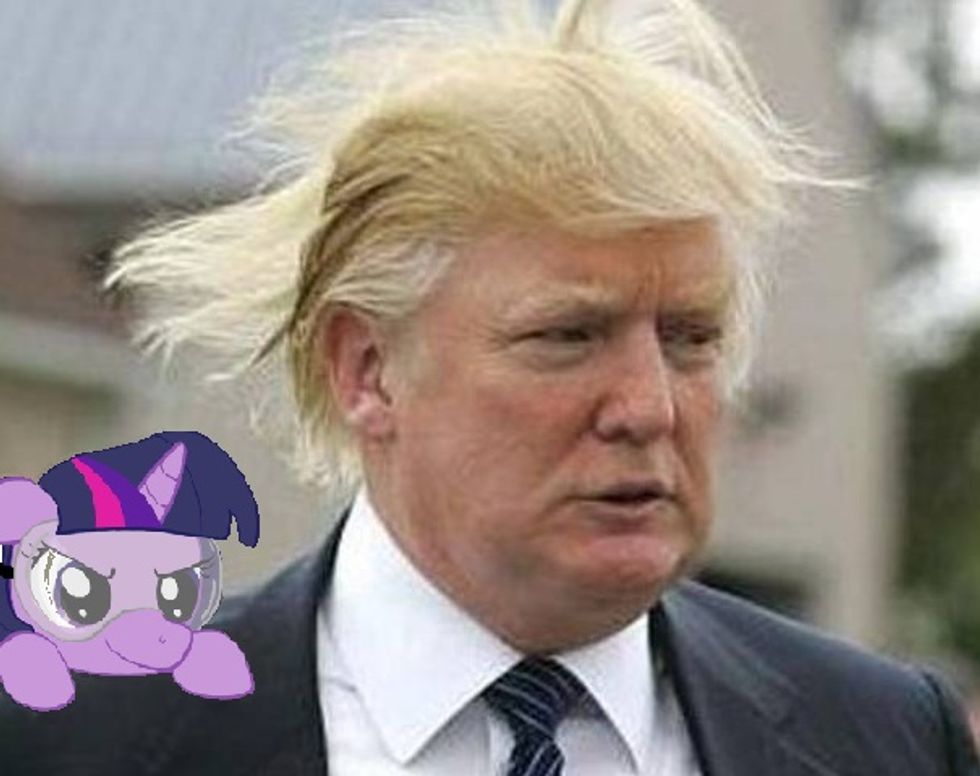 As if there were any doubt that Donald Trump is the world's richest cranky toddler, the useless sack of bile is now pursuing a vendetta against the distiller of Glenfiddich whiskey after the company sponsored a contest that honored an opponent of a golf resort that Trump plans to build in Scotland. Trump's latest case of the whining spitties erupted when Michael Forbes, a "quarryman and salmon fisherman" who has refused to sell his 28-acre property to Trump, was named "Top Scot" in a contest sponsored by the whiskey brand. In retaliation, Trump announced that his ptomaine-factory resorts and casinos will no longer sell any whiskeys made by Glenfiddich's parent company, William Grant & Sons. Leaving aside the peevish overreaction, we question the wisdom of reducing the number of disinfecting agents available at Trump properties.

In exactly the sort of thing that you would expect Donald Trump to say, the overcompensating narcissist spun out a conjecture that the distiller's dumb publicity-stunt contest, which it has sponsored for fifteen years, was actually conceived and executed in reaction to Trump Himself, because, of course, the successful whiskey-making concern was jealous of the pure concentrated white dwarf star of brilliance that is Trump, who recently began marketing his own brand of single-malt firewater:

"Glenfiddich should be ashamed of themselves for granting this award to Forbes, just for the sake of publicity.

"Glenfiddich is upset that we created our own single malt whisky using another distillery, which offers far greater products. People at our clubs do not ask for Glenfiddich, and I make a pledge that no Trump property will ever do business with Glenfiddich or William Grant & Sons.

"I hereby call for a boycott on drinking Glenfiddich products because there is no way a result such as this could have been made by the Scottish people."

Poor Donald Trump! The poor man can't even get pretend elections to go the way he wants! At least this time he didn't call for a revolution. Still, the man does have an uncanny talent for saying stuff that simply reeks of un-self-aware grandiosity, doesn't he?

After suggesting that the voting for Forbes had been fixed by "a small group of detractors" casting multiple votes, he continued: "Glenfiddich's choice of Michael Forbes, as Top Scot, will go down as one of the great jokes ever played on the Scottish people and is a terrible embarrassment to Scotland."

Yes, Donnie. It certainly is embarrassing. But only to someone with the slightest sense of shame.

In a side-note to the story, Mr. Forbes's anti-Trump stand has been embraced by filmmaker and House of Lords member David Puttnam, who produced Bill Forsyth's 1983 film Local Hero, a tale of Scottish eccentrics who successfully resist a rapacious American tycoon's plans to buy up and exploit their property. It's a pretty good movie, but Donald Trump is no Burt Lancaster.

We suppose that, because of this sleazy hit piece, there's no chance His Royal Hairness will stock our excellent line of high-quality Wonkette tees, hats, and mugs.