Donald Trump And Arnold Schwarzenegger Will See Each Other In Hell 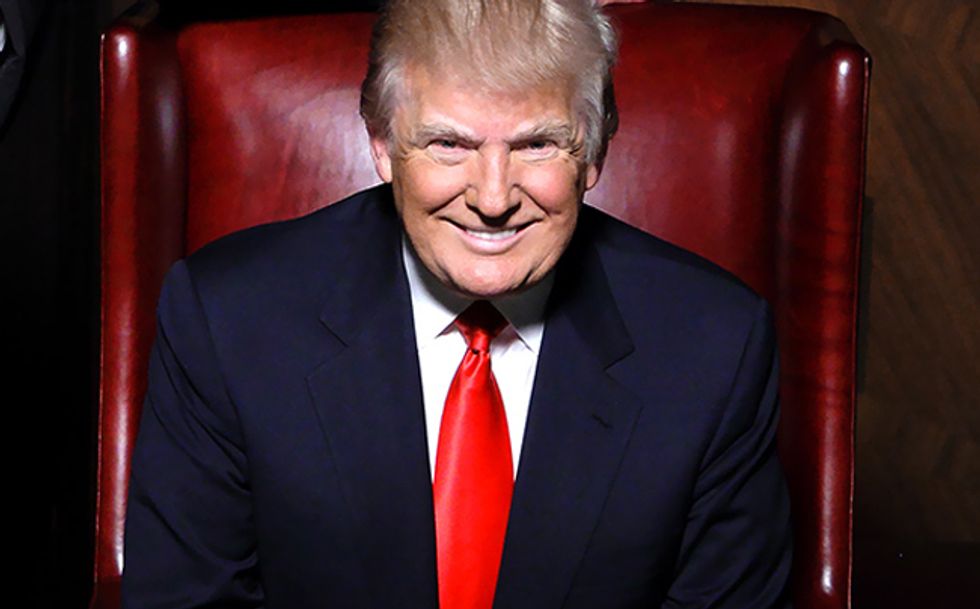 Did you used to watch Donald Trump's teevee show, "Celebrity Apprentice"? It wasn't very good. All these idiots would run around, and every task came down to "how much money did you raise," which they would all do by just calling their rich friends. It was not compelling television! Barack Obama had some Thoughts on it too.

AHAHAHHAAHAHA and those funny jokes convinced Donald Trump to run for president, WHO'S LAUGHING NOW???

Not us. We are not laughing. Ever again.

BUT! Since Donald Trump can no longer do his very important television show, because of how he is going to be presidenting us now, he (he remains executive producer) and NBC and we assume Mark Burnett needed to find someone else who could "YOU'RE FIRED" people, and after some looking, they decided on Arnold Schwarzenegger, former governor of California, extravagantly successful real estate businessman (he doesn't even have any bankruptcies that we know of!), and OG pussburglar.

It should have been a match made in heaven, but apparently it was THE OPPOSITE, judging by Donald Trump's thinskinned tweets about how much better he is at "Celebrity Apprentice" than his handpicked successor.

Dude? You're poormouthing the star of the show of which you're executive producer? Just ... how does that work?

Now, we watched the Arnold Schwarzenegger version of "Celebrity Apprentice," because somehow we made that our job? Hahahaha, life is grand.

It was fine. There were a few interesting things about it, like, for one thing, it was extremely diverse. Literally half the contestants were black, whereas on the Trump version there was usually one black person. This is because Donald Trump is fucking racist as all hell, and also is super uncomfortable around black women.

But on the Schwarzenegger version, there were Eric Dickerson, and Lisa Leslie (who is apparently VERY THE BEST and one of my new favorite people), and some very beautiful black Real Housewives, and also more models and more sportsballers I am unfamiliar with. Anyway, they added up to half the contestants, who were also Snookie and Boy George and Vince Neil and Carnie Wilson.

At one point, Governor Schwarzenegger told Jon Lovitz that in the boardroom, he is not "Arnold" but "Governor," and Jon Lovitz was mortified! But unlike Donald Trump's demand that everyone call him "Mr." Trump, which is not a thing we generally do in America, it is correct to call officials by their highest title (as long as it's not president; those go back to "governor" or "general" or whatever once they've been replaced by a new Mr. President, thank you Miss Manners), as a matter of respect.

At another point, Arnold Schwarzenegger and his hot nephew, Patrick, spoke about one of those contestants, right in front of her but in German so she couldn't understand, calling her a blabbermouth, so that was rude too! Don't talk about people in another language in front of them! The only people allowed to do that are pedicurists from Vietnam!

Also, Arnold Schwarzenegger has a terrible dye job, so Donald Trump shouldn't be threatened by him at all! IT'S SO WEIRD, WHO DOES THAT (IN PUBLIC)??? (We mean publicly being threatened by your successor, in the show on which you're still making money, not the dye job. Apparently LOTS of people do that.)

Did Arnold Schwarzenegger respond more classily than the president-elect? You bet your sweet grabbable titties he did!

Not only no bankruptcies, but the man knows how to thread tweets? Yeah, it's a good thing he's not eligible for the presidency, Trump, or you might have a bit of a fight on your very tiny hands.